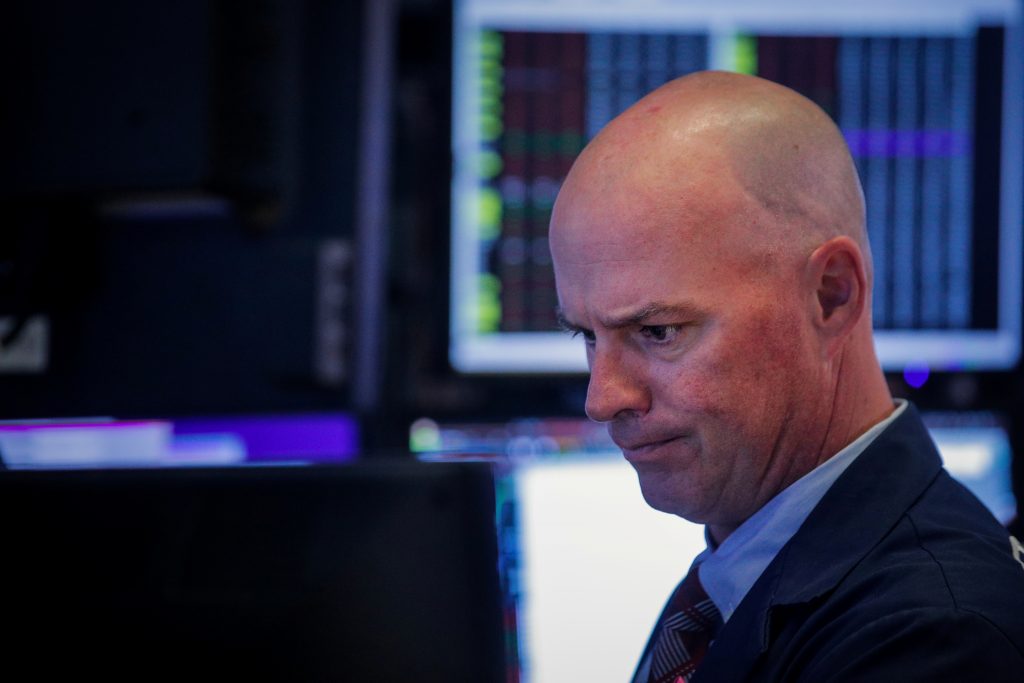 U.S. stocks accelerated their losses Wednesday as investors retreated amid more disappointing economic news and the growing threat of a global slowdown.

The Dow Jones Industrial Average was down nearly 500 points as of noon Eastern time, or 1.9%, following a decline of 1.3% a day earlier. Bond prices jumped again as investors sought out safer assets, which sent yields sharply lower.

Investors were already taking up defensive positions following a dismal manufacturing report on Tuesday that sent the market to its sharpest loss in five weeks. The worries only compounded Wednesday with cuts to Germany’s growth forecast and a surprisingly weak private employment report.

Now, a dispute between the U.S. and Europe over airplane manufacturers has opened the door for President Donald Trump to impose new tariffs on European goods. That would inject even more uncertainty into global markets as the U.S. and China remain locked in a trade dispute.

SECTORS: Technology stocks were the biggest losers, led by declines from Microsoft and Apple. The sector has been extremely sensitive to shifts in economic forecasts and swings in the ongoing trade war between the U.S. and China.

Banks were also among the biggest losers as bond yields continued to slide. Citigroup fell 2.5% and Bank of America fell 1.6%. The yield on the 10-year Treasury fell to 1.59% from 1.64% late Tuesday. Lower bond yields force interest rates on loans lower, hurting banks.

Sinking bond yields are a sign that investors are shifting money into less-risky holdings because economic growth is in doubt. Another safe-play asset, utilities stocks, held up better than the rest of the market.

OVERSEAS: Stocks in Europe and Asia fell broadly as the global prospects for economic growth dim amid trade uncertainty. A group of leading think tanks joined the German government in cutting the economic forecast for Europe’s largest economy.

The European Union is trying to avoid even more uncertainty and is urging President Donald Trump to hold off on additional tariffs in a dispute stemming from subsidies for airplane makers Airbus and Boeing. The World Trade Organization ruled the U.S. can raise tariffs on up to $7.5 billion worth of European goods in response to illegal Airbus subsidies.

October could turn out to be more volatile than usual after a relatively calm September. Most of the movement in the market was very slight last month, despite that month’s reputation for large swings, said Ryan Detrick, senior market strategist for LPL Financial, in a note.

“This normally volatile month could be passing some big moves to October this year,” he said.

U.S. and Chinese envoys are expected to meet for yet another round of trade talks next week, potentially swaying the market sharply depending on any news produced from those negotiations.

THE ECONOMY: Investors grappled with more worrisome economic data Wednesday as payroll processor ADP reported that hiring slowed more than expected in September. U.S. companies added 135,000 employees, marking a decline from the same period a year prior and falling short of forecasts.

Investors are keeping a close watch on Friday’s employment report from the U.S. government, though economists are forecasting growth.

One other important economic indicator this week is Thursday’s service sector report. Services make up the bulk of the U.S. economy and the sector has continued to grow even as manufacturing has slumped.

DIM RESULTS: Acuity Brands fell 11.9% after the lighting products maker reported weak profit and revenue during its fiscal fourth quarter. The company said it remains cautious on its forecast for 2020 because of the uncertainty around trade disputes and tariffs.