Israel Netanyahu Attorney: Prosecution Will Have ‘No Choice But to Close Cases’
Israel 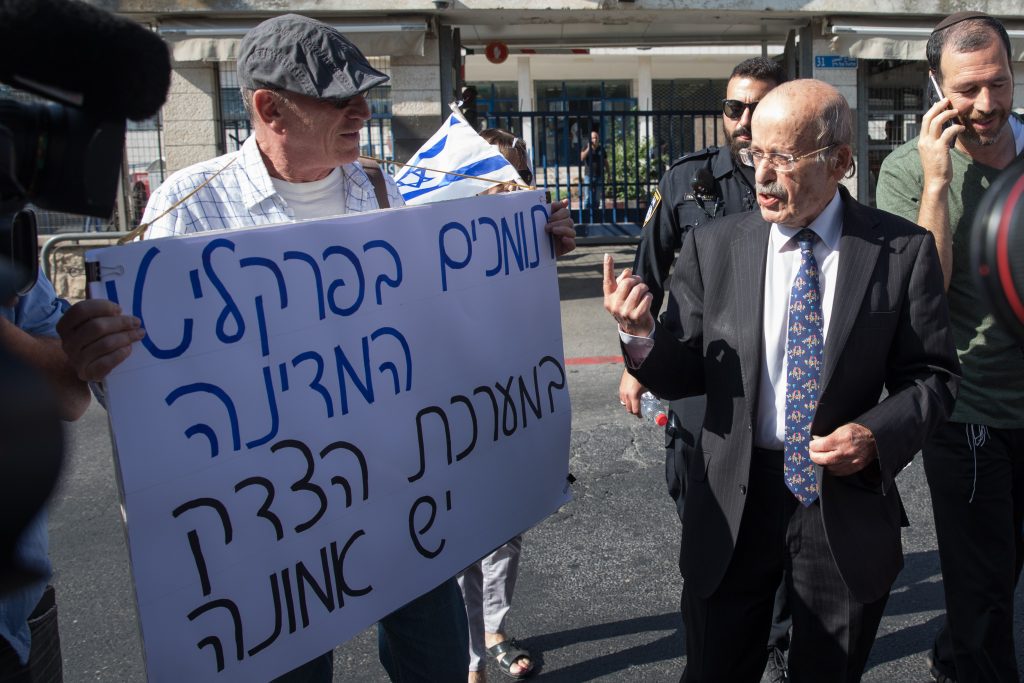 Attorneys for Prime Minister Binyamin Netanyahu – ten of them – entered the offices of State Attorney Avichai Mandelblit for the first of four sessions in which they will present objections and responses to claims by investigators that Netanyahu is guilty of corruption-related actions. The Prime Minister himself was not present at the hearing.

Netanyahu’s attorneys expressed optimism at his prospects for exoneration in the three cases open against him. And it is exoneration that Netanyahu’s attorneys are seeking. Speaking to reporters before entering the hearing, attorney Ram Caspi, who joined the defense team several weeks ago, said that the idea of a pardon or plea bargain had not been raised by them. “I have full faith not only in the justice system in Israel, but also in those in charge of it.”

The investigations against Netanyahu include Case 1000, in which Netanyahu is accused of accepting extravagant gifts from millionaire Arnon Milchin, mostly cigars and champagne; Case 2000, in which the prime minister allegedly leaned on the publishers of Yisrael Hayom to limit distribution of their free newspaper in order to benefit from better coverage in rival newspaper Yediot Acharonot; and Case 4000, also known as the Bezeq-Walla News Case, an influence-peddling probe that alleges that Netanyahu offered his good services to Israeli billionaire Shaul Elovich in return for positive coverage on the Walla news site.

Caspi said that the hearing would clarify a great deal of information that has been inaccurately portrayed in the media as “evidence” against Netanyahu in recent months. “I believe there is a solid basis to change the way things have been presented in documents we received based on the investigations.”

Regarding Case 4000, Caspi said that “to the best of my knowledge this is the first time that the relationship between government officials or public servants and journalists is being looked at as a possibly criminal action. We will present well-known facts as well as new ones. We are positive that when we are finished there will be no choice but to close the cases. We are not talking about a deal. We believe that at the end of the day, all three cases will be closed.”

With that, Ruth Gavison, a senior figure in Israel’s legal establishment, wrote in a social media post Wednesday that she did not believe the Prime Minister would be treated fairly. “I am worried that Netanyahu will not have a chance at justice. There has been too much trial by media, and now it will be difficult to close these cases in any other way [than to issue indictments against him]. This is a tragedy for Netanyahu but for the country as well. I would like very much to take the criminal charges off the table in these cases, but it will not be simple. These kinds of legal battles never turn out well, there are no winners,” she wrote.

Mandelblit will be deciding on whether or not indictments for bribery are appropriate based on the outcome of the hearings. According to the law, individuals accused of procedural crimes for which the potential criminal penalty is three years or more are entitled to hearings before relevant legal officials prior to indictments being issued, but the number of hearings or the exact procedure of what happens afterwards is not defined. There is no time limit for Mandelblit to issue his recommendations, but it is expected that he will do so before mid-December, when State Prosecutor Shai Nitzan is set to retire.