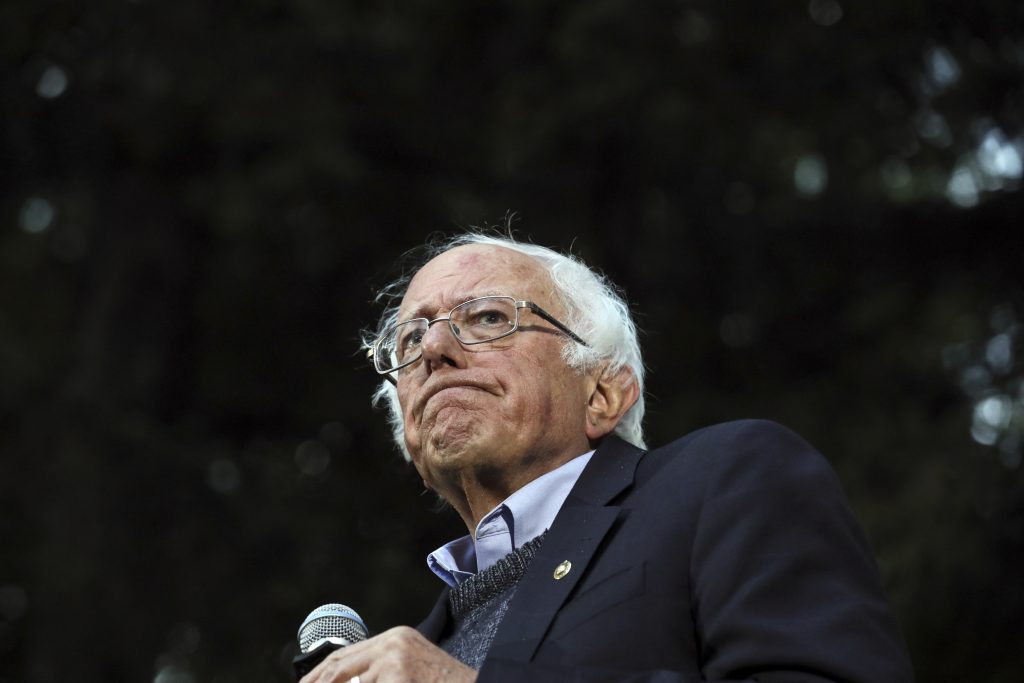 Bernie Sanders raked in $25.3 million over the past three months, putting him on top of the Democratic presidential fundraising field for now. But in a sign of what he and his rivals are up against, President Donald Trump and his allies raised $125 million.

Other leading Democrats, including former Vice President Joe Biden and Massachusetts Sen. Elizabeth Warren, have yet to reveal their fundraising figures for the third quarter.

But the staggering sum on the Republican side, which was split between the Trump campaign and the Republican National Committee, highlights the cash gulf between Democrats and the GOP. It could revive anxieties among Democrats that a protracted primary featuring nearly 20 candidates could be counterproductive while Trump builds a massive cash advantage that can be used against the ultimate nominee.

“This is a (ton) of money,” Bakari Sellers, a top surrogate for California Sen. Kamala Harris, tweeted in reference to Trump’s fundraising. Although activists who contribute small amounts online have been widely celebrated, he said that won’t stand up to the Trump operation. “Small dollar donations alone ain’t going to save our democracy.”

Sanders posted the largest quarterly sum for a Democratic White House hopeful this year. The haul ensures the Vermont senator will be an enduring presence in the primary even as Warren and Biden have surpassed him in some polls. Much of the money he raised came from his army of small-dollar online contributors.

Meanwhile, Pete Buttigieg, who entered the race as the little-known mayor of South Bend, Indiana, pulled in $19.1 million. That’s an almost $6 million dip from his field-leading sum last quarter but a figure that’s all but certain to place him in the top tier.

Now the question turns to how much money Biden and Warren raised during the third quarter. The former vice president and the Massachusetts senator are in an increasingly close race for first place, according to several polls.

There’s a growing sense of urgency for the White House hopefuls as the primary becomes a fierce battle for a limited pool of cash. In the days and hours before Monday’s deadline, they pleaded for money, making appeals on social media and collectively blasting out more than 80 emails asking supporters to “chip in” $5, $10 or $50. The third-quarter figures have to be reported to the Federal Election Commission by Oct. 15.

Those outside the top tier are facing pressure to post competitive numbers or get out. They will not only face challenges paying for advertising to amplify their message, but are also likely to struggle reaching fundraising thresholds set by the Democratic National Committee to qualify for future debates.

“If you are being outraised 3-to-1 by Elizabeth Warren, Bernie Sanders or Joe Biden, you have no viable path to victory,” said Rufus Gifford, Barack Obama’s former finance director. “Even if you can compete in the early states … shortly thereafter you will run out of money.”

Over the summer, Harris kept up an aggressive fundraising schedule to stockpile the cash needed to build up her operation in early states. Yet she did not improve on her past performance amid a series of stumbles and restarts. The $11.6 million she reported raising keeps virtually even with her totals from each of the past two quarters, suggesting she hasn’t caught on with much of the party’s activist donor base.

Still, it’s enough to keep her in contention in the months to come, and Harris’ campaign manager, Juan Rodriguez, said they were “built to win this primary.”

Cory Booker recently warned that unless he juiced his fundraising numbers by an additional $1.7 million he’d likely have to drop out. The New Jersey senator announced Tuesday he was “proud” of his team for surpassing the goal while pulling in a total of $6 million for the quarter.

But campaign manager Addisu Demissie then issued a memo stating they’d have to do even better and raise $3 million by the end of October.

Montana Gov. Steve Bullock, who has also struggled to raise money, is applying for public financing, turning to a fund that is replenished by those who volunteer to chip in $3 from their taxes. He hopes it will supplement his campaign with a $2 million boost, though the FEC board does not currently have enough commissioners to sign off on the request.

The third quarter came to a close as Trump faces an impeachment inquiry in Congress related to his attempts to get the Ukrainian government to investigate Biden. The development has scrambled politics in Washington but has turned into a fundraising rallying cry for both major political parties.

Trump has turned his outrage over the inquiry into a flood of campaign cash. Trump and the RNC reported raising $13 million in the three days after House Speaker Nancy Pelosi announced the probe last week. And Trump’s son Eric tweeted later that the total grew to $15 million.

That’s a source of worry for some Democrats.

“Trump’s presidency is wounded but not mortally wounded, and their operation is as good as it gets,” Gifford said.