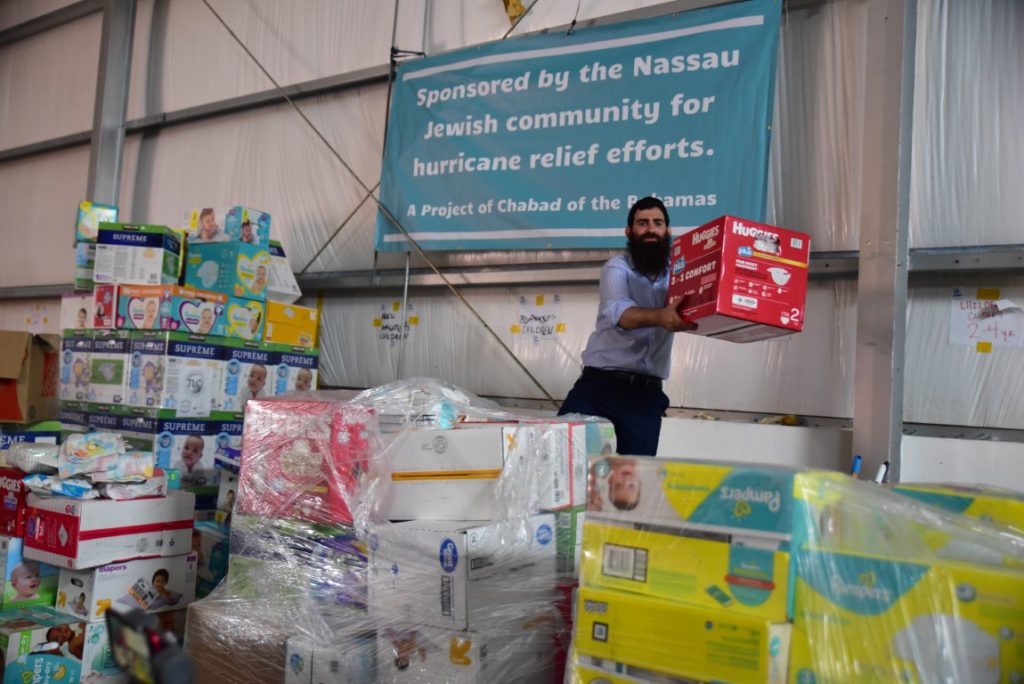 In the days after Hurricane Dorian ravaged the islands of Grand Bahama and Abaco in the Bahamas, many focused on sending food, water and hygiene products to those affected by the storm.

But for Sholom Bluming, the island nation’s only rabbi — who had been leading a small congregation of Jews in the country long before the devastation — there was one need that he saw being overlooked: addressing the mental health of the children.

“I found myself walking around the shelters and I saw these children were lonely; they were scared and they had nothing left,” he said.

Bluming, 32, the spiritual leader of the only Jewish center in the Bahamas, Chabad of the Bahamas, quickly mobilized, reaching out to business owners and organizations, securing warehouses in Freeport and ordering water and other supplies for the thousands in need. Within three days, Bluming boarded a plane from Nassau to Freeport and spoke to community leaders to get a better sense of what was needed.

The idea quickly came to him that there had to be safe spaces for children that would allow them to be kids again and get the therapeutic help they needed in the wake of the Category 5 storm, whose 185 mph sustained winds and deluge of rain decimated the island.

“Children needed to feel like children again,” he said. “Their whole world as they knew it was gone.”

According to the Bahamas government, 53 people have been confirmed dead from Dorian. Many in the Abacos and Grand Bahama lost everything and remain traumatized. There was no question, Bluming said, that he needed to be there for the victims, especially the tiniest of them.

As he walked the streets of Freeport in the days after the storm, the message became very clear to him. When he gave a little girl a doll, she held it tight and cried.

“She said it reminded her of the doll she had on her bed when the storm hit,” he said.

Then he encountered two school-aged boys sitting outside their destroyed home, looking sad and lonely. He gave them a board game and their faces lit up. There was another boy who had a simple request — a hug. Bluming obliged.

Those encounters gave Bluming the idea of doing more by creating a physical space — in most cases a tent — where they can be separated from their reality for a while. With no school in session, the children wanted to be able to play and create. Bluming reached out to local organizations and started getting volunteers, including therapists and counselors, to man the centers.

Jewel Major, who is leading the volunteer effort for Grace Missions in New Providence, said organizations on the ground have come together to create safe spaces for children and are training volunteers to recognize their needs and how to help them. At one of the largest shelters where about 1,000 people are being housed, they created the Love Tent.

Inside the tent, children are invited to color, participate in group games, pray and tell stories. On a recent day, a large group of kids were being taken to a pool to learn how to swim. Another group of kids made picture frames and a professional photographer came to snap a photo of them.

“We are finding that a lot of children want to share their stories,” Major said. “Life as they knew it is no longer the same. They are looking for some normalcy.”

Henry Cooper, a volunteer who lives in Grand Bahama, is grateful for Bluming’s foresight.

“It is a blessing for them to be here in the country,” said Cooper. “They know the need and have made it clear they are not going anywhere. We are very grateful for that.”

The Jewish community in the Bahamas — unlike many other island nations — is fairly young, Bluming said. About 40 to 50 years ago, Jews started settling in Nassau and other parts of the island, but no brick and mortar synagogue was built. Today, they meet in a storefront.

Several years ago, Bluming, who is originally from New York and was ordained in the Rabbinical Seminary of Los Angeles in 2007, visited Nassau and realized quickly “there was a thirst” for a Jewish community. He said he found “a very welcoming place in the Bahamas.” He and his wife moved there.

The congregation Bluming created mainly comprises people who have relocated from other places around the world. Every weekend there are about 50 worshippers for Shabbat, which begins at sundown Friday and runs through sundown Saturday. For Jewish holidays, the group gets bigger with tourists joining in.

When Rosh Hashana, the Jewish New Year, begins at sundown Sunday, Bluming is expecting more than 100 people to gather in a hotel ballroom, to pray together and reflect on the year.

Bluming said the holiday is especially meaningful this year because Rosh Hashana is a time for self awareness and accountability.

“On Rosh Hashana we are called upon to answer to ourselves and are challenged to find where we can make the world around us better,” he said.