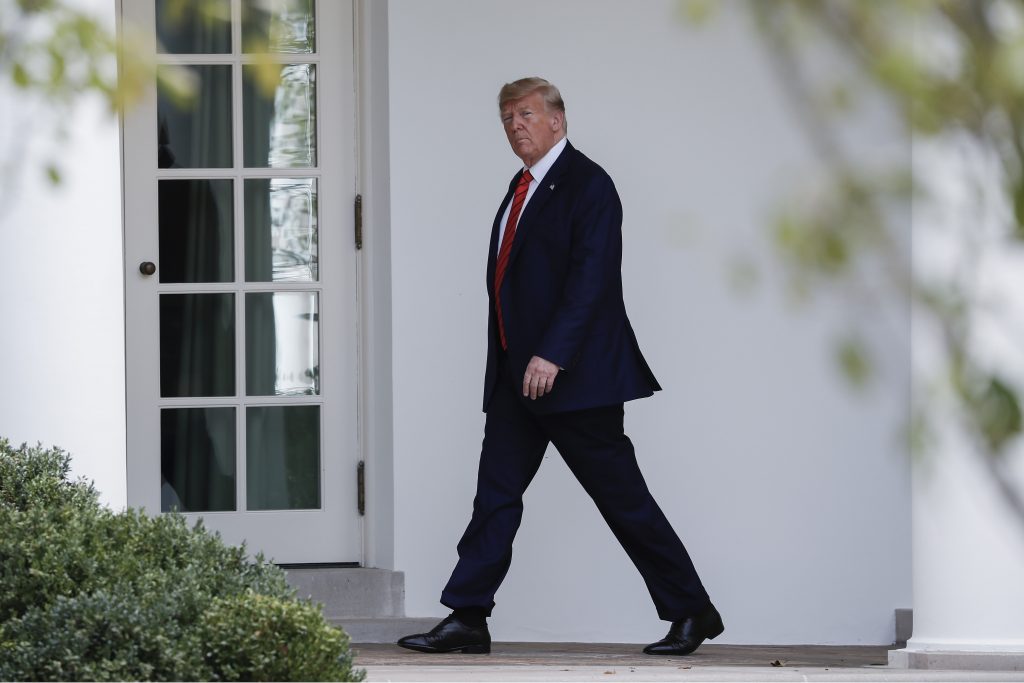 Someone laughed loudly during Thursday’s closed-door speech President Donald Trump gave at the U.S. Mission to the United Nations. Other voices spoke in hushed murmurs.

Trump had just demanded to know who provided information about his call with the Ukrainian president to a whistleblower, describing that person as “close to a spy” and adding, “You know what we used to do in the old days when we were smart? Right? With spies and treason, right? We used to handle them a little differently than we do now.”

Trump’s comments, which were included in leaked video obtained by The Washington Post and others, have sparked intense backlash, with top Democrats decrying his words as “threatening” and defending the whistleblower at the center of a new push for impeachment.

“He sounds like a criminal,” Sen. Kamala D. Harris, D-Calif., a presidential hopeful, told MSNBC on Thursday night. ” ‘Who snitched? Who gave up the goods? Let’s find out who gave up the goods on us and make sure there’s a consequence and it’s serious, and let that be a lesson to everybody else.’”

“It sounds like it’s straight out of some bad drama, but the fact is this is the president of the United States,” Harris said.

Harris was joined by fellow Democratic candidates Sens. Cory Booker of New Jersey and Amy Klobuchar of Minnesota, former Texas Rep. Beto O’Rourke and former Housing and Urban Development Secretary Julián Castro, who suggested that Trump’s comments could endanger the lives of the whistleblower and anyone else who aided in the complaint. Trump was also rebuked by some Republicans, including former Illinois Congressman Joe Walsh and former Massachusetts Gov. Bill Weld, who are challenging the president for the GOP nomination, and Rep. Will Hurd, R-Texas.

In a joint statement, the chairmen of the House Foreign Affairs, Intelligence, and Oversight and Reform Committees argued that Trump’s remarks amounted to “reprehensible witness intimidation and an attempt to obstruct Congress’ impeachment inquiry.”

“We condemn the President’s attacks, and we invite our Republican counterparts to do the same because Congress must do all it can to protect this whistleblower, and all whistleblowers,” said the statement from Reps. Eliot Engel, D-N.Y.; Adam Schiff, D-Calif.; and Elijah Cummings, D-Md. “Threats of violence from the leader of our country have a chilling effect on the entire whistleblower process, with grave consequences for our democracy and national security.”

The White House did not respond to a request for comment early Friday.

Trump’s statements came after the House released a nine-page version of the whistleblower’s complaint. According to the complaint and a rough transcript of a July 25 phone call, Trump repeatedly urged Ukrainian President Volodymyr Zelensky to investigate his political opponent, former Vice President Joe Biden, offering assistance from the Justice Department and raising the possibility of a White House sit-down. The call took place after Trump had halted almost $400 million in military aid to Ukraine.

As Democrats speed up their impeachment investigation, Trump and other Republican leaders have continued to attack the credibility of the whistleblower and the complaint, highlighting that many of the allegations rely on secondhand information from other U.S. officials.

Thursday’s private event, which was closed to the press, was intended to honor the staff and families of the U.S. delegation, but Trump took it as an opportunity to grouse about his enemies. During his speech, the president again went after Biden, the “crooked” media and the whistleblower’s complaint.

“Basically that person never saw the report, never saw the call,” Trump said of the whistleblower on Thursday. “Heard something, and decided that he or she or whoever … it is – sort of like, almost, a spy.”

Then the president appeared to suggest that the whistleblower and whoever may have supplied the person with information about the Ukraine call had behaved like spies. Trump also mentioned treason, which in the past has been punished by death.

In an interview with MSNBC on Thursday, Booker said Trump sounded “more like a threatening thug than giving forth the ideals of a statesman” and accused the president of using rhetoric that “gives license to people to do dangerous things.”

“It’s not surprising that Donald Trump doesn’t know the difference between patriotism and treason,” the New Jersey senator said. “If there’s any treasonous actions here it is coming from the White House.”

Castro, who also appeared on MSNBC, called the president a “dictator.” In Castro’s view, Trump had suggested that the whistle-blower “should basically be killed.”

Meanwhile, other presidential candidates took aim at Trump on Twitter, echoing criticisms that his comment constituted a threat.

“This is wrong and this is un-American,” Walsh tweeted about Trump’s attacks on the whistleblower. “And Congressional Republicans say nothing. Shameful. History is watching.”

Several politicians also defended the whistleblower, with some referencing federal laws protecting those who expose wrongdoing. There are specific guidelines for whistleblowers in the intelligence community, who are protected from retaliation so long as they follow proper protocol when submitting complaints.

“This person is not a spy,” Hurd said at an event in Austin on Thursday night, according to the Dallas Morning News. “Let me say that very clearly. This is clearly somebody who knew the consequences of what he or she was doing . . . and they shared it through the right mechanism.”

Harris expressed concerns that Trump was failing to uphold the law and respect the system created for whistleblowers.

“It should be the president of the United States, above all, who says that we welcome and will always protect people who are fighting for the integrity of our democracy,” she said on MSNBC.

In a video shared on Twitter, Sen. Bernie Sanders, I-Vt., thanked the whistle-blower for “an extraordinary act of courage.”

“Trump has used the word treasonous to describe this whistleblower,” Sanders said. “Well, let me tell you what I think treasonous activity is. It is a president who is trying to undermine the Constitution of the United States and a president who thinks he is above the law.”

Trump did not address the backlash Thursday night over his leaked remarks. Instead, the president appeared to be watching Fox News’s coverage of the Ukraine scandal, going on Twitter to share several clips from host Sean Hannity’s Thursday show.