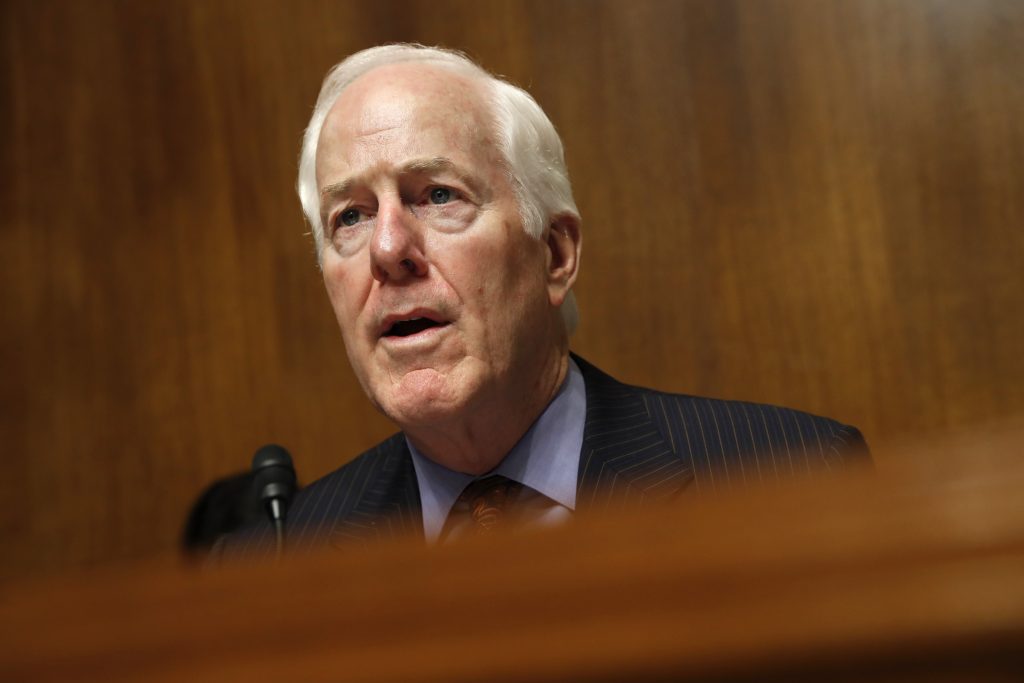 The Senate voted for the second time Wednesday to overturn President Donald Trump’s declaration of a national emergency at the southern border, once again falling well short of a veto-proof majority needed to block the money.

The 54-41 vote was similar to the outcome in March, the first time the Senate voted on the disapproval resolution. Eleven Republicans sided with Democrats on Wednesday to support the measure, which required a simple majority to pass.

The resolution still must clear the House before being sent to Trump. He vetoed a similar measure several months ago.

Senators had important new information as they cast their votes Wednesday — although it didn’t change the result.

When senators last voted on the issue, the Pentagon had not released a list of the $3.6 billion in military construction projects that were being canceled to pay for Trump’s border barrier.

That list was released this month, and senators have a list of the specific projects in their states that are being scrapped to free up funding for Trump’s wall. That dynamic created new pressure for GOP senators, especially those up for reelection in 2020, to weigh their allegiance to Trump and his border wall against their support for much-needed projects at military bases and installations back home.

“If Republicans choose to stand with President Trump, they’ll be saying they fully support allowing the president to take money from our military to fund a border wall,” Senate Minority Leader Charles Schumer, D-N.Y., said ahead of the vote.

Such arguments failed to sway GOP senators who voted for Trump’s emergency declaration the first time around, and no one changed their vote Wednesday.

“How would I square voting differently?” Sen. John Cornyn, R-Texas, asked reporters Tuesday. Cornyn is up for reelection, and his state is losing some $38.5 million in funds for projects in El Paso and San Antonio.

Cornyn declared such concerns “way too parochial” and expressed confidence that the money for the Texas projects would ultimately be restored, even though Democrats have insisted they will not go along with that plan.

“There won’t be any net loss in my opinion,” Cornyn said.

Under an obscure law, the White House has said that declaring a national emergency at the border allows the president to take money from military construction projects already approved by Congress and spend it on his wall instead. Democrats — and some Republicans — have tried to block him, without luck.

The resolution that passed in March was ultimately vetoed by Trump, and Congress didn’t override his veto. The same outcome is expected this time around.

The list of military construction projects being canceled, which includes 41 projects in 23 states, ranges from upgrading a middle school at Ft. Campbell in Kentucky to building a shooting range at a base in Jackson, Mississippi.

Some of the projects are in the home states of the GOP senators who are considered most vulnerable in their reelection fights, and Democratic campaign committees and challengers have already been making plans to use the issue against them.

In Arizona, where Republican Sen. Martha McSally faces a potentially difficult reelection, a $30 million project being canceled would have upgraded vehicle maintenance buildings that date back to the 1930s. The existing structures don’t comply with “life safety” standards, Army officials wrote in 2017, leaving U.S. service members at risk.

Nevertheless, McSally voted Wednesday as she did in March to uphold the emergency declaration, and her spokeswoman Amy Lawrence said the senator had “no new concerns.”

In Colorado, where Republican Sen. Cory Gardner faces reelection in a competitive state, an $8 million project to create a Space Control Facility at Peterson Air Force Base has been canceled. Gardner did not respond to reporters’ shouted questions on the topic as he entered a GOP lunch on Tuesday, and his representatives did not respond to a request for comment.

In North Carolina, where Republican Sen. Thom Tillis is up for reelection, $47 million is being canceled for projects including a health-care facility for active duty Marines at Camp Lejeune. The existing facility “lacks basic requirements such as sinks, proper ventilation and exam rooms with doors,” defense officials wrote in 2017.

Tillis already faced pressure on the issue because before the March vote he announced that he planned to oppose the national emergency declaration, only to reverse himself under pressure from Trump supporters in North Carolina.

At the time, Tillis said he was hopeful of being able to work with the Trump administration to update the National Emergencies Act. A spokesman said Tillis has been working on legislation that has passed the Senate’s Homeland Security Committee to place greater constraints on the use of presidential emergency declarations. As he did before, Tillis voted Wednesday to uphold Trump’s border emergency.

Senate Majority Leader Mitch McConnell, R-Ky., said Wednesday that many of the problems could be solved if Democrats would approve more money for the military projects instead of forcing a “show vote” on the border wall.

“It’s a false choice of Democrats’ own invention,” McConnell said. “The only reason there could be any tradeoff between border security and these other priorities is their refusal to support commonsense border security.”

In a news release the Democratic Senatorial Campaign Committee attacked Republicans who voted with the president, accusing them of “dismissing dire warnings from the Pentagon . . . while doubling down on their craven support for this reckless cash grab.” The committee said it would be releasing digital ads in targeted states to highlight the votes.