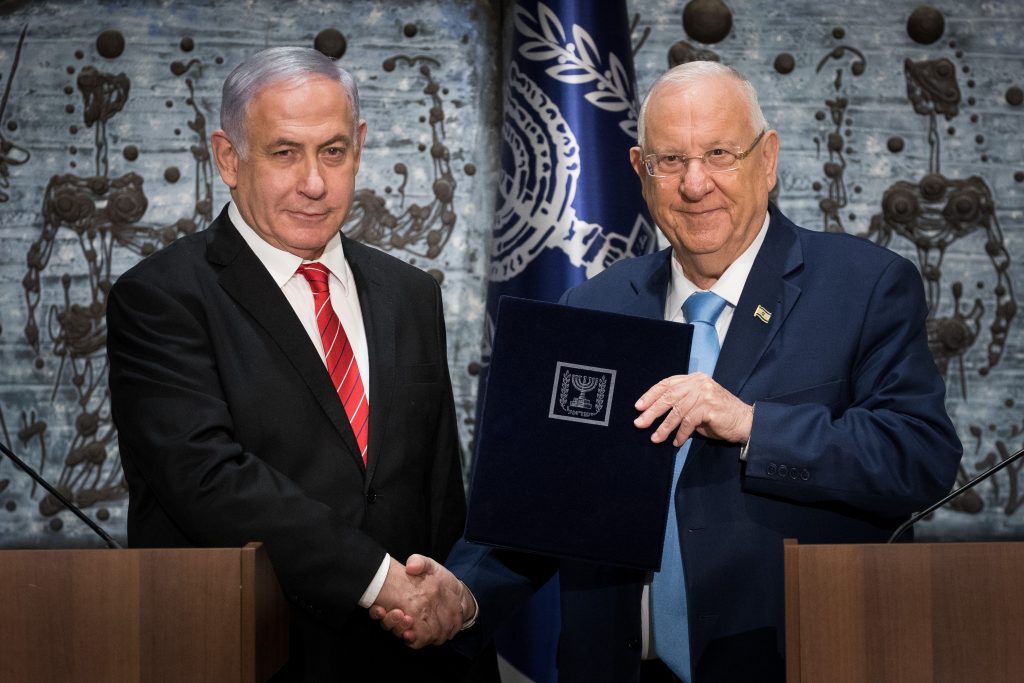 Although the law gives Rivlin seven days to name someone to form a government, he decided to do so without delay, in an effort to bring a quick end to the months of political uncertainty that have hampered the functioning of the government and exasperated the Israeli public.

Standing alongside Netanyahu after a final one-on-one meeting with Gantz ended, Rivlin explained that he made the choice because “Netanyahu has more of a chance to form a government,” a reference to his Likud-led bloc of 55 recommendations to Gantz’s center-left bloc of 54.

Acknowledging the bleak prospects of success in forming a coalition of 61 MKs, Netanyahu said that “my inability to form a government is slightly less than that of Gantz.”

Netanyahu called on Gantz to form a unity government led by him, citing compelling security, diplomatic and economic conditions, including the threat of war with Iran and a peace plan soon to be unveiled by President Donald Trump.

In his remarks, Rivlin also revealed that during their meetings he suggested the possibility of passing a law enabling a prime minister to suspend himself from office while under indictment and have a vice prime minister take over until the prime minister is cleared, as Netanyahu may soon be indicted on corruption charges.

However, Gantz rejected that too. “Blue and White will not sit in a government whose leader is under indictment,” he said. “This issue, along with other essential issues, are more important to us than any discussion on distributing ministerial portfolios or a rotation [of the premiership.]”

Netanyahu will now have 28 days to form a government, with a two-week extension at Rivlin’s discretion.

If Netanyahu fails, presumably Gantz will be invited to try. In addition, if 61 MKs nominate another candidate, that person will also be given a chance.

The alternative would be a third round of elections, probably in January or February.

A while before the announcement, it was already evident that Netanyahu would receive the designation, as cards reserving front-row seats for officials at the press conference bore the names of Likud negotiators but none for Blue and White. But Rivlin’s staff later took away the cards for the chief Likud negotiators, Yariv Levin and Environmental Protection Minister Ze’ev Elkin, according to The Times of Israel.

Earlier in the evening, talks aimed at forging a unity government of Israel’s two major parties appeared headed for a demise, after Rivlin’s office confirmed that he would probably task one of the party leaders with forming a coalition at a meeting currently under way.

Reinforcing the impression that the prospect of power sharing between Likud and Blue and White was rapidly slipping away, the latter’s negotiating team did not arrive for a scheduled meeting to move the talks forward.

In addition, Blue and White’s No. 2, Yair Lapid, predicted in a tweet on Wednesday that “Benny Gantz will be the next prime minister and Bibi [Netanyahu] will go deal with his criminal cases.”

Lapid continued, “The transparent attempts by Likud to stir up [disagreements among members of Blue and White] don’t impress any of us.”

Likud officials were quoted as saying that “the sole culprit for the stalemated negotiations is Yair Lapid, who is ready to drag the country to another election just in order to see Gantz as prime minister.”