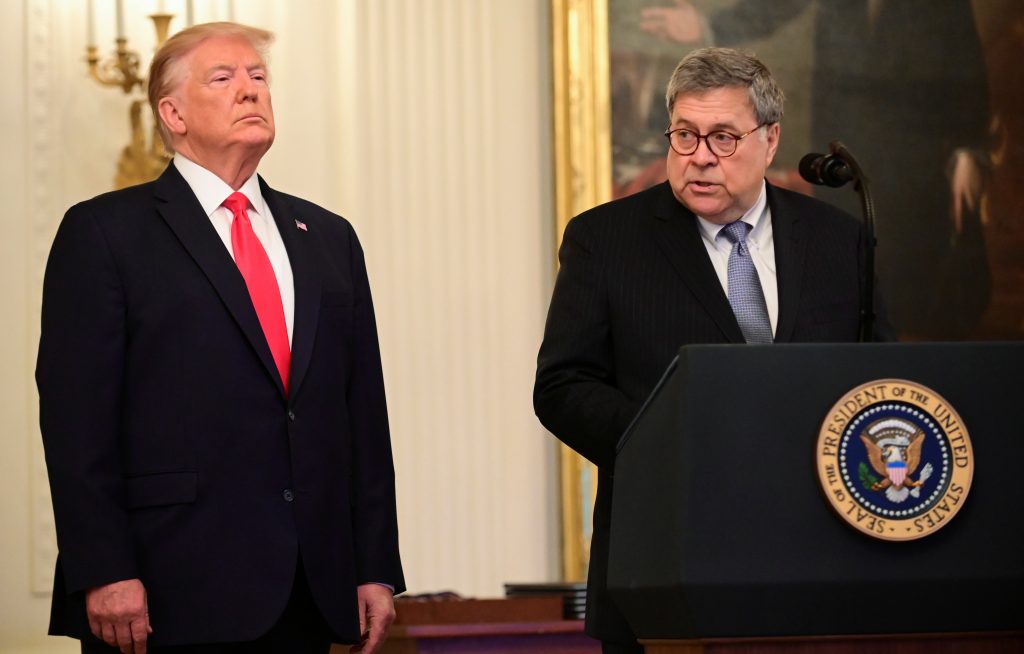 It’s a role Barr has embraced since taking command of the Justice Department in February, most notably by casting special counsel Robert Mueller’s report on the Russia investigation as a vindication for Trump, even though Mueller pointedly said he was not exonerating Trump of obstructing justice.

But even as one of the president’s greatest defenders, Barr has sought to distance himself from President Trump’s conversations with Ukrainian President Volodymyr Zelenskiy. The Justice Department insists he was unaware the president had said he would help investigate a political rival.

Attorneys general traditionally strike a delicate political balance. As members of the Cabinet, they are expected to back a president’s law enforcement agenda. Barr has done that — emphasizing some of the president’s main talking points and standing shoulder-to-shoulder with Trump in defending key policy decisions. But as the heads of the Justice Department, attorneys general are expected to be above politics and not let political considerations guide their actions.

Trump inserted Barr into the latest political firestorm, one that has led to a House impeachment inquiry, when he asked Zelenskiy to dig up dirt on Democratic presidential candidate Biden, and indicated Barr and Trump confidant Rudy Giuliani would be in touch.

“There’s a lot of talk about Biden’s son, that Biden stopped the prosecution and a lot of people want to find out about that so whatever you can do with the Attorney General would be great,” Trump said in the July 25 conversation , according to a rough transcript the White House released on Wednesday.

In the call, Trump seemingly equates Barr with Giuliani, who has no role in the administration and, in media appearances, is one of Trump’s most vocal defenders.

Rep. Jerrold Nadler, D-N.Y., chairman of the House Judiciary Committee, said Wednesday that Barr must step aside from the Ukraine investigation now that the transcript shows that Trump “dragged the Attorney General into this mess.”

Barr saw no need to recuse himself after the Justice Department was made aware of a whistleblower’s complaint about the conversation and other matters. The intelligence community’s internal watchdog had raised concerns that in the call Trump may have violated campaign finance law.

The Justice Department found no crime and the matter is now closed. Those close to the attorney general argue there would have been no reason for him to recuse, or even consult ethics officials, because he was unaware of the president’s conversation at the time it occurred and was not involved in any discussion of investigating Biden and his son, Hunter.

In a statement, the Justice Department sought to distance Barr from the situation, insisting that the attorney general was unaware that the president offered him up to investigate one of the president’s political rivals.

The attorney general was generally aware of the whistleblower complaint after it was submitted to the Justice Department, weeks after the call, a person familiar with the matter said. But Barr was not involved in any of the legal analysis and did not make the decision that the president’s actions did not amount to a crime.

The person spoke to The Associated Press on condition of anonymity in order to discuss internal investigative deliberations.

Under Barr, the Justice Department has supported the White House’s decision to claim broad executive privilege to prevent the testimony of administration officials that could be potentially damaging for Trump. Barr has also defied subpoenas from Congress — in line with the Trump administration’s stance to block Democrats’ efforts to investigate Trump.

Barr also has not been reluctant to joust with congressional Democrats.

After a House panel voted to hold him in contempt, Barr baited House Speaker Nancy Pelosi at an event on Capitol Hill in May, asking her if she brought her handcuffs to arrest him.