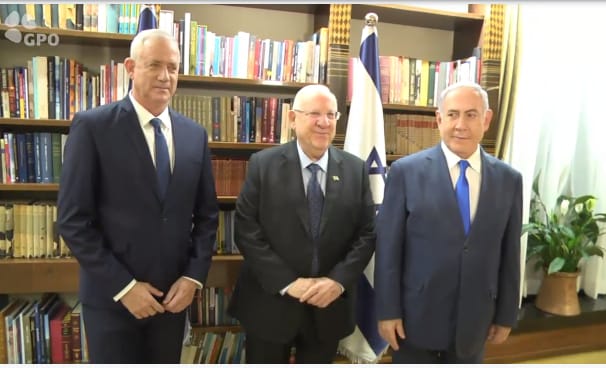 Reports that Prime Minister Binyamin Netanyahu was “only interested in talking about rotation issues” at his three-way meeting with Benny Gantz and President Reuven Rivlin – and his willingness to overlook and ignore the policies of his right-wing partners – are just more media “fake news,” the Likud said Tuesday morning. The report on Channel 12 was an effort to sow discord among right-wing parties, and there was no truth to it.

The report Monday night quoted Blue and White sources as saying that Netanyahu had hinted to Gantz that he was prepared to dump the religious and chareidi parties he just days ago signed a deal with, which would have the Likud, Yamina, United Torah Judaism and Shas all negotiate together as a single bloc, with none of the parties entering any government without the others. The Blue and White sources said that “Netanyahu was interested only in talking about rotation, and he said nothing about his partners,” the report said.

Nonsense, the Likud said in a statement Tuesday. “The Likud again wishes to clarify that as prime minister Binyamin Netanyahu told President Reuven Rivlin and Blue and White chairman Benny Gantz Monday night [that] Minister Yariv Levin will be representing the Likud and its partners in all negotiations. That representation will not be just for the Likud. The false reports in the media are designed to sow discord on the right and to prevent the establishment of a unity government,” the statement said.

Although no decision on either a unity government or on whether Netanyahu or Gantz would get the first opportunity to form a government emerged from the Monday night meeting, it was decided that Likud and Blue and White would discuss the possibility of a unity government. Levin will represent the Likud and its partners, and Yoram Turbowitz will represent Blue and White. The two will meet Tuesday. Netanyahu and Gantz are scheduled to meet again on Wednesday, without Rivlin present.