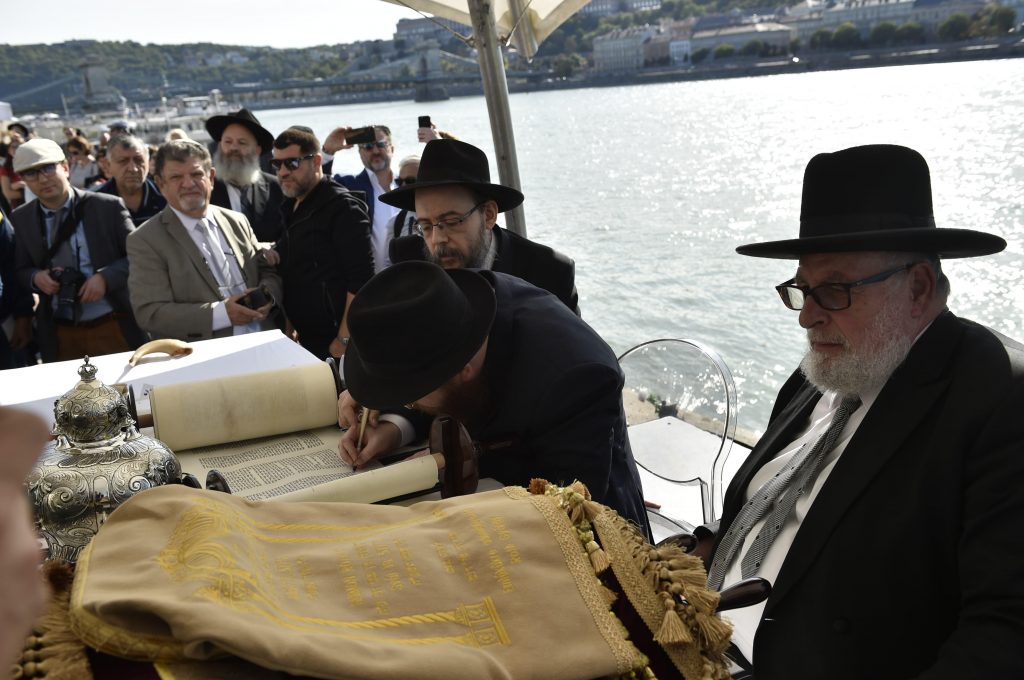 Last Sunday was a joyful day for the Jewish community in Budapest, as two new shuls marked their inauguration with a joint hachnasas sifrei Torah.

The highlight of this emotional day was the siyum sifrei Torah on the banks of the River Danube, right next to the “Shoes” Holocaust memorial. On the very spot where thousands of people, many of them Jews, were shot into the river in 1944-45, Torah and Yiddishkeit were now being reinforced. The sifrei Torah were dedicated l’ilui nishmas these martyrs. Harav Eliezer Simcha Weiss, representing the Israeli Chief Rabbinate, said, “You can kill us, but we shall live on! They can now rest in peace and the Budapest community will continue to grow.”

Chief Rabbi of Chabad Budapest, Harav Boruch Oberlander, who began to revitalize the community from the moment Communism crumbled, grew emotional as he recalled his father’s words. “My son, I saw Jews being shot into the Danube with my own eyes!” Harav Oberlander thanked Hashem “that as his son I stand at this very spot and commemorate the sifrei Torah.”

Harav Shlomo Köves, Chief Rabbi of the United Hungarian Jewish Community (EMIH) under whose auspices the event was organized, proudly spoke of the renaissance he has witnessed in Budapest since his childhood, saying “The community has risen from the ashes.”

One sefer Torah was dedicated in Szentendre, a suburb of Budapest, accompanied by music and dancing through the streets. Hungary’s deputy prime minister spoke of the country’s deep-rooted connection to its Jewish community and reconfirmed its commitment to their security.

The second sefer Torah was placed in the aron kodesh of the new Zsilip Shul in Budapest’s 13th District amidst joyous singing and dancing. The evening concluded with a young boy’s moving rendition of the Rebbe Reb Eizik Kailver’s Szola Kakas and a buoyant dance to the words Sheyibaneh Beis Hamikdash.