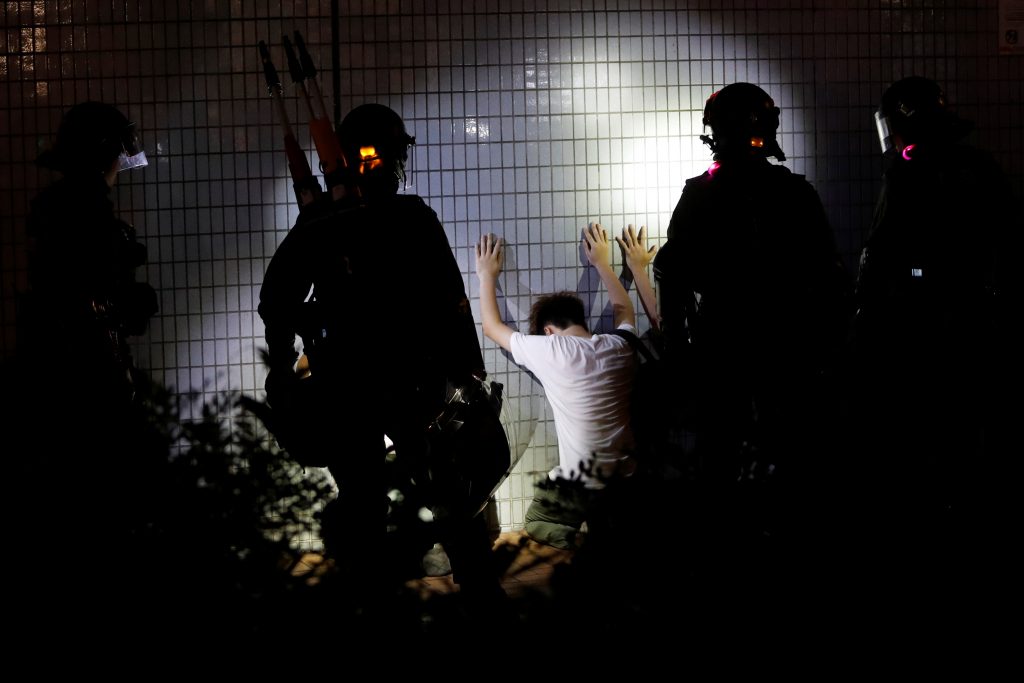 Hong Kong cleaned up on Monday and train services in the city resumed, after another weekend of sometimes violent protests that saw pro-democracy activists vandalize a railway station and a shopping mall.

The Chinese-ruled territory is on edge ahead of the 70th anniversary of the founding of the People’s Republic on Oct. 1, with authorities eager to avoid scenes that could embarrass the central government in Beijing.

The Hong Kong government starts an official dialogue with community members this week in a bid to heal rifts in society and has already called off a big fireworks display to mark Oct. 1 in case of further clashes.

The former British colony also marks the fifth anniversary this weekend of the start of the “Umbrella” protests, a series of pro-democracy demonstrations in 2014 that failed to wrestle concessions from Beijing.

Activists plan to gather on Saturday at the so-called Lennon Walls in the heart of the financial center, which feature antigovernment messages and are named after the original John Lennon Wall in Communist-ruled Prague, built in the 1980s,  and plan to spread protests to different areas across Hong Kong island.

Another rally is planned on Sunday in the bustling shopping and tourist district of Causeway Bay, the site of some fierce recent clashes between police and protesters.

Police on Sunday fired tear gas to disperse protesters in the latest clashes in more than three months of unrest that has plunged the city into its worst political crisis in decades.

Forty-seven people, 42 males and five females aged between 14 and 64, were arrested.

The biggest of several clashes took place in or near Mass Transit Railway (MTR) stations, now a familiar target of attack because stations are often closed at the government’s behest to stop demonstrators from gathering.

Hundreds of protesters had gathered in the New Town Plaza in the New Territories town of Sha Tin on Sunday, chanting: “Fight for freedom” and “Liberate Hong Kong.”

Activists trampled on a Chinese flag near the train station and rounded on a man they believed had opposed them. Protesters also smashed video cameras and ticket booths in the station.

Some started to trash fittings at the entrance of the mall. The protesters then spilled outside where they set fire to barricades made of cardboard, broken palm trees and other debris.

MTR said on Monday that train services had returned to normal.

China, which has a People’s Liberation Army garrison in Hong Kong, has said it has faith in Hong Kong leader Carrie Lam to solve the crisis.

Demonstrators are frustrated at what they see as Beijing’s tightening grip over the Asian financial hub, which returned to China in 1997 under a “one country, two systems” formula intended to guarantee freedoms that are not enjoyed on the mainland.

China says it is committed to the “one country, two systems” arrangement and denies interfering.

Scores of airlines wrote jointly to the Hong Kong government earlier this month to seek airport fee waivers as they struggle to deal with the financial fallout from the protests that have led to a sharp drop in traveler demand.