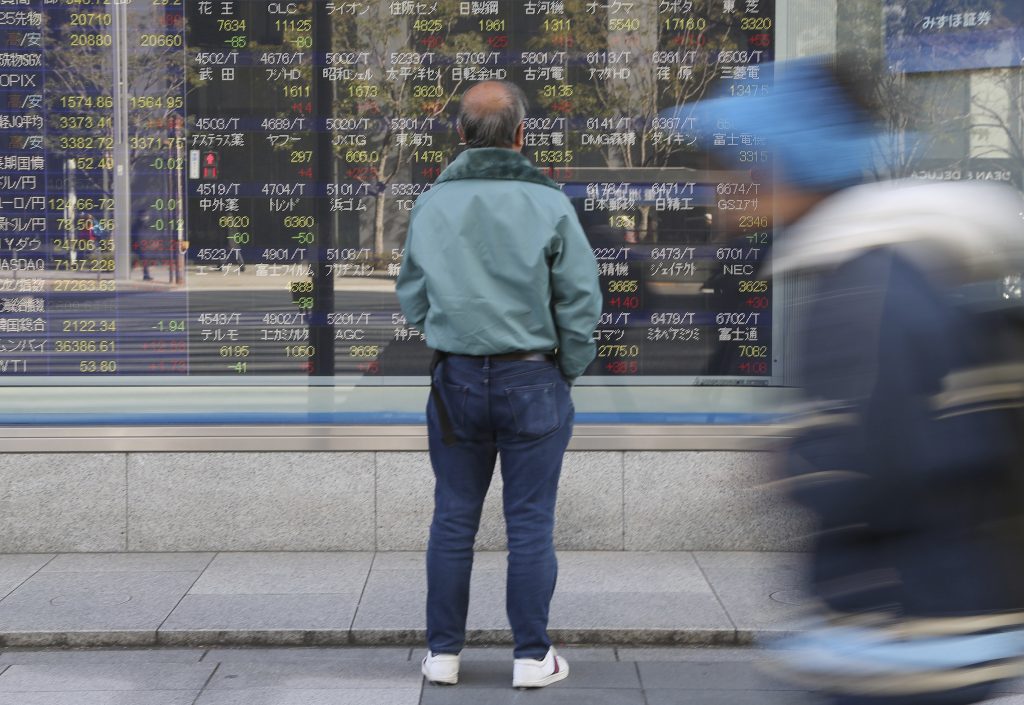 Market sentiment was fragile with civil unrest in Hong Kong, tensions in the Middle East and worries that a trade deal between the United States and China could take a long time to materialize. Moves were further exaggerated by low volumes as Japanese markets were shut for a public holiday.

The dour mood was likely to spread elsewhere with pan-region Euro Stoxx 50 futures easing 0.3% in early European trade and Germany’s DAX futures off 0.2%. London’s FTSE futures were, however, a tad higher.

Chinese shares were in the red, with Shanghai’s SSE Composite stumbling 1.5% while the blue-chip index was down 1.65%.

South Korea’s Kospi ended flat after spending most of the day in negative territory following disappointing trade data, while Australian and New Zealand shares bucked the trend to finish 0.3% and 0.4% higher, respectively.

That left MSCI’s broadest index of Asia-Pacific shares outside Japan down 0.2% at 510.04 points. It is still up more than 3% so far in September.

“There are real concerns about the impact on economies from the trade dispute,” said Michael McCarthy, Sydney-based strategist at CMC Markets. “People are probably getting an idea that this will be a long negotiation. And the longer it lingers the more impact it will have economically.”

Over the weekend, the U.S. Trade Representative’s office issued a brief statement characterizing the two days of talks with China as “productive.” It added that a principal-level trade meeting in Washington would take place in October, as previously planned.

China’s Commerce Ministry, in a brief statement, described the talks as “constructive,” and said they had also had a good discussion on “detailed arrangements” for the high-level talks in October.

Additionally, the United States removed tariffs from more than 400 Chinese products in response to requests from U.S. companies.

Despite the improved tone, markets still remain unconvinced about the possibility of an imminent deal.

Investors were rattled by news on Friday that Chinese officials unexpectedly canceled a visit to U.S. farms this week following their two days of negotiations in Washington.

One Shanghai-based analyst at Tebon Securities said the cancellation had hit investor sentiment and could be a major drag on Chinese A-shares in the near term.

The Pentagon has ordered additional troops to be deployed in the Gulf region to strengthen Saudi Arabia’s air and missile defenses following an attack on Saudi oil facilities.

U.S. Secretary of State Mike Pompeo said on Sunday the additional troops are for “deterrence and defense” and Washington aimed to avoid war with Iran.

Markets will closely watch September manufacturing activity surveys due from the United States and European Union later in the day for any signs of a rebound.

Action in currency markets was muted.

The euro and the British pound were barely changed, leaving the dollar index mostly flat at 98.471 against a basket of six major currencies.