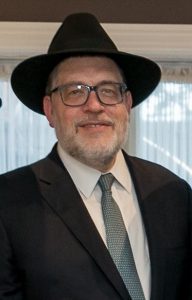 Mr. Feivish Smoke begins his day by delivering a Daf Yomi shiur in the Beis Medrash Tefillo L’Moshe Dzibo on Barclay Avenue in Montreal, Quebec. The shiur, given at 6:30 each weekday morning (and 45 minutes before Minchah on Shabbos), is the perfect way for the dedicated group of Yidden to begin their busy workdays.

When did you start delivering this shiur?

Feivish Smoke: Our group started the shiur in 1996 around Lag BaOmer, and we were not learning Daf Yomi. We had our own seder, and we learned various masechtos. Beginning Purim of 5763/2003, we decided to change the nature of the shiur and began learning Daf Yomi, and we had tremendous chizuk when we learned Maseches Avodah Zarah. In the beginning, we had a large group, a full house I would call it, but as the years have gone on, some of the original group have passed on. Today, the shiur has about 8 to 10 regular members.

The Rav of the beis medrash, the Dzibo Dayan, Harav Yechiel Mayer Katz, is very happy that we learn Daf Yomi in his beis medrash. Although he is aligned with Satmar, and is a staunch Chassid of the late Satmar Rebbe, zy”a, nevertheless he supports our shiur and gives us encouragement.

In fact, shortly after we began learning Daf Yomi, I had to be away for a day, so I decided we would learn one and a half blatt the day before I left, and we learned another blatt and a half the day when I returned, to complete the extra blatt which we missed in my absence. The Rav protested and said we must learn yeiden tug, each and every day, and must not miss even a single day. So these days, when I must miss a day, I get someone to substitute, so the shiur will continue in my absence.

Since that is the case, who takes over when you are unavailable to say the shiur?

Usually I have to juggle a bit, since it is not always easy to find someone who can take over. I have a chaver who is a neighbor, Mr. Leiby Goldberger, and although he is not a member of the shiur, nevertheless he is kind enough to step in most of the time when I cannot be there.

How do you prepare for your shiur?

I must say that meiHashem maaneh lashon, Hashem puts the right words into my mind and mouth. When delivering a Daf Yomi shiur, which has a set amount to be covered in a limited amount of time, it is very important to convey the most meaning in the fewest amount of words. In order to accomplish that, a proper hakdamah is needed, and once I can present that sort of introduction, the rest usually falls into place.

I prepare whenever time allows me to, which varies from day to day. But I know that the quality of the preparation will affect the way the shiur goes and how well it will be understood.

Time is always a challenge, since I must prepare for the shiur properly. Some masechtos, which are more familiar to me and the participants, go more easily, such as Maseches Megillah. Now we just learned Maseches Krisus, and that masechta, and a masechta like Horiyos, which are more complicated and which we are less familiar with, are a greater challenge. Generally, masechtos like Gittin and Kedushin which are bakant (familiar) from our yeshivah days are easier, while Seder Kodshim is fremd (foreign) and it is always harder. But at the end of the day, sadne d’ara chad, the landscape is similar, and it depends on the preparation and how it is given over.

I have tremendous gratitude for my wife who assists me by allowing me the time to prepare.

When there is a complicated sugya and the group understands it, it is a gratifying feeling that the effort bore fruit.

Another rewarding part of the shiur is discovering how the cases of the Gemara are relevant to our daily lives. We have three accountants in the shiur, and when we learned the sugya of kesubas b’nin dichrin, which deals with estate planning, they told us how Chazal were well ahead of curve, how they thought of the concepts used by every financial planner!

After a while, by learning through Shas, one develops a thought process which aligns with the Gemara, and you begin to think of things in terms of how the Gemara deals with it. This, too, is a side benefit of learning Daf Yomi.

How do you respond when a participant asks a good question for which you do not have a ready answer?

I feel that whenever someone asks a question, it is my responsibility to build him up, and let him know that what is bothering him is addressed in Rashi, or Tosafos, or the Maharashah. I often tell them, “aleh gutte kushyos freigt der Gemara. All good questions are asked by the Gemara.” About 90% of the questions raised by the members of the shiur will be dealt with in a future Gemara.

So, as they say in finances and business, if I knew yesterday what I know today, I would have been a millionaire. Similarly, I often acknowledge that what we are learning today answers a question which we came across in the past. Nevertheless, even if I do not provide an answer on the spot, it is important to acknowledge a good kushya.

I have not gone to past siyumim in the New York Metro area. But I will tell you what my father experienced. Although he was not learning Daf Yomi, nevertheless in the 1990s, when the Siyum was celebrated in Madison Square Garden in New York City, he wanted to attend. I did not have a ticket, but Mr. Feifer, who was associated with Agudas Yisrael, was able to get him a ticket. My father was hearing impaired at the time, so he did not quite hear all the drashos, but he shared this machshavah with me. 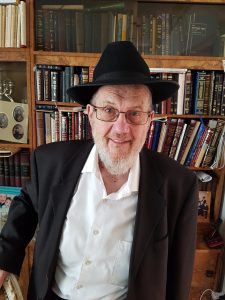 After learning in Yeshiva Ner Yisrael in Baltimore, Rabbi Yitzchak Zryl was a Rebbi in Yeshiva Merkaz HaTorah of Montreal, the forerunner of Yeshiva Gedola of Montreal which presently serves the mesivta-age bachurim. He then began his career as a beloved Rebbi in Hebrew Academy of Montreal, and upon his retirement several years ago, he took up learning Daf Yomi…several times a day.

What inspired you to begin learning Daf Yomi?

Rabbi Yitzchak Zryl: My father, Reb Eliezer Lipa, z”l, was a shochet and he would often discuss what he was learning with his friends. This inspired me to learn Daf Yomi, which I began in the late 1960s. There was a time when I bought some Daf Yomi tapes from Torah Tapes, which helped me and many other Daf Yomi learners keep up with the Daf. Once, I was on a trip to New York City, and I had the opportunity to purchase all the tapes of the series which I had not yet bought. I even built a special cabinet to hold these tapes, and the Daf Yomi has become an important part of my life.

Many years ago, when Mr. Feivish Smoke began the Daf Yomi shiurim in Dzibo, I felt it was something that I should join, and I have been part of it ever since then. I’m happy to say that my son, Yossie, is also learning Daf Yomi, so it seems to have rubbed off from generation to generation. 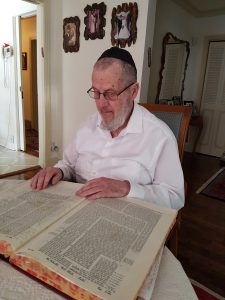 How much time do you spend learning Daf Yomi?

Although I learned Daf Yomi for decades, ever since I retired some 20 years ago, I, baruch Hashem, have the time and freedom to learn the day’s Daf several times. I begin in the morning at 6:30 a.m., with the wonderful shiur given by Mr. Smoke, and at night I join the Dirshu chaburah which learns from 8:30 until 9:30 p.m. In addition, I have a chavrusa whom I learn with during the afternoon, so I can say, “v’chut hameshulash lo bimheirah yinateik — the triplicate rope does not break easily.”

[In a discussion with Rabbi Zryl’s son, Yossie, he mentioned that at any time during the day, he finds his father reviewing the Gemara by himself. BZK]

What are your biggest challenges when it comes to learning Daf Yomi?

I always find learning Maseches Krisus, which Daf Yomi is doing right now, quite hard. There never seems to be enough time to learn it. Every seven and a quarter years, I have to struggle to get a better understanding of it. I always hope that next time around, I will get to know it better.

One advantage this generation has, and which I take advantage of, is the availability of the Artscroll Gemara. When I am on my own, I can look things up or go through the explanations it provides in order to clarify whatever I need.

I am not so young, and getting around is a bit more difficult for me. Traveling to the Metlife Siyum will not be in my plans. But I will definitely celebrate with the olam here in Montreal as we complete Shas once again, and join in with Klal Yisrael as we begin the journey through Shas another time.