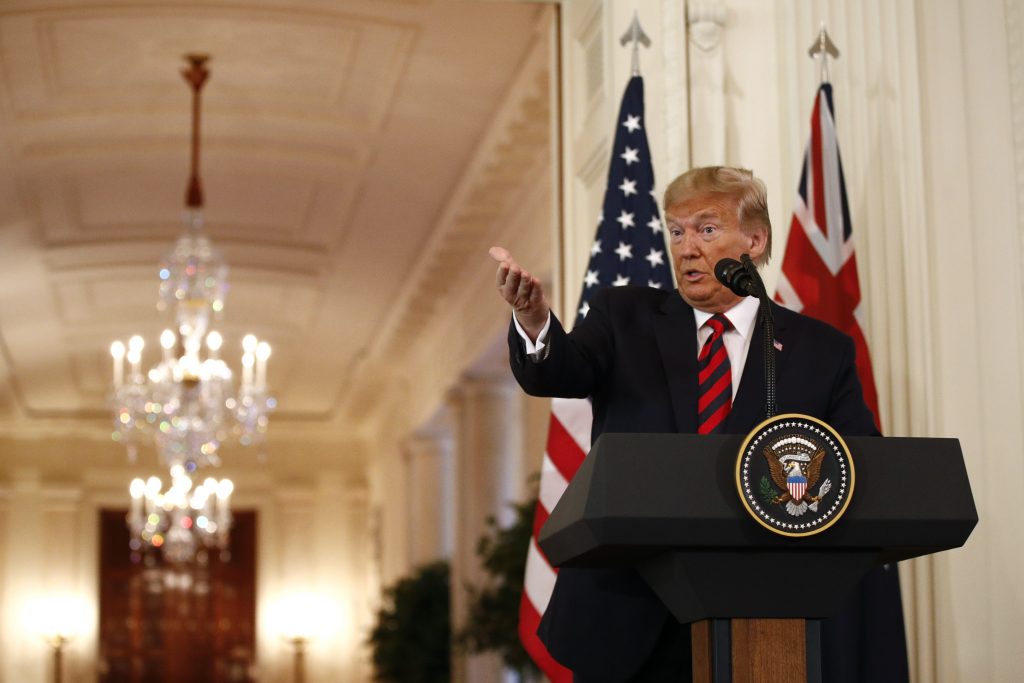 President Donald Trump announced new sanctions Friday on Iran’s central bank, calling them “the highest sanctions ever imposed on a country,” and saying that Iran is “practically broke.”

“It looks to me like they want to keep going at it. . . . And when they go at it with us, there’s no way they win,” he said, a day after Iranian Foreign Minister Mohammad Javad Zarif said that any military strike against his country would bring “all-out war.”

Treasury Secretary Steven Mnuchin, who joined Trump at an Oval Office meeting with the visiting prime minister of Australia, said that “we’ve now cut off all source of funds to Iran.”

Trump promised the new sanctions earlier this week after cruise missiles and drone strikes against Saudi oil facilities that both the United States and Saudi Arabia have charged came from Iran. They follow a series of “maximum pressure” measures including a ban on Iranian oil exports.

Trump is scheduled to meet later Friday with his national security team to discuss additional options to respond to Iran.

“Going into Iran would be a very easy decision,” Trump said at a press conference with Australian Prime Minister Scott Morrison after their Oval Office session. “Most people thought I would go in within two seconds,” he said, referring to a U.S. military strike. “But plenty of time, plenty of time.”

“I think I’m showing great restraint. A lot of people respect it, some people don’t,” he said, referring to advice he’s received about a possible U.S. military strike. “I don’t do it for anybody. I do it for the United States, what’s good for our allies. And it’s working out very well.”

The Treasury Department charged that the Central Bank of Iran, whose directors were sanctioned last year, provides funding directly to the Islamic Revolutionary Guard Corps-Quds Force, itself designated as a terrorist organization for its support of proxy militias in Iraq, Syria, Yemen and elsewhere.

Other governments are now “on notice that they are risking the integrity of their financial systems by continuing to work with the Iranian regime’s arm of terror finance, its Central Bank,” Sigal Mandelker, the top Treasury official on terrorism finance, said in a statement.

The central bank was first sanctioned by Congress in 2011, but those restrictions were lifted by the Obama administration under the 2015 Iran nuclear deal. Trump reimposed them, and the new measures, under executive order, add an additional layer.

Sanctions on the National Development Fund, however, are a first.