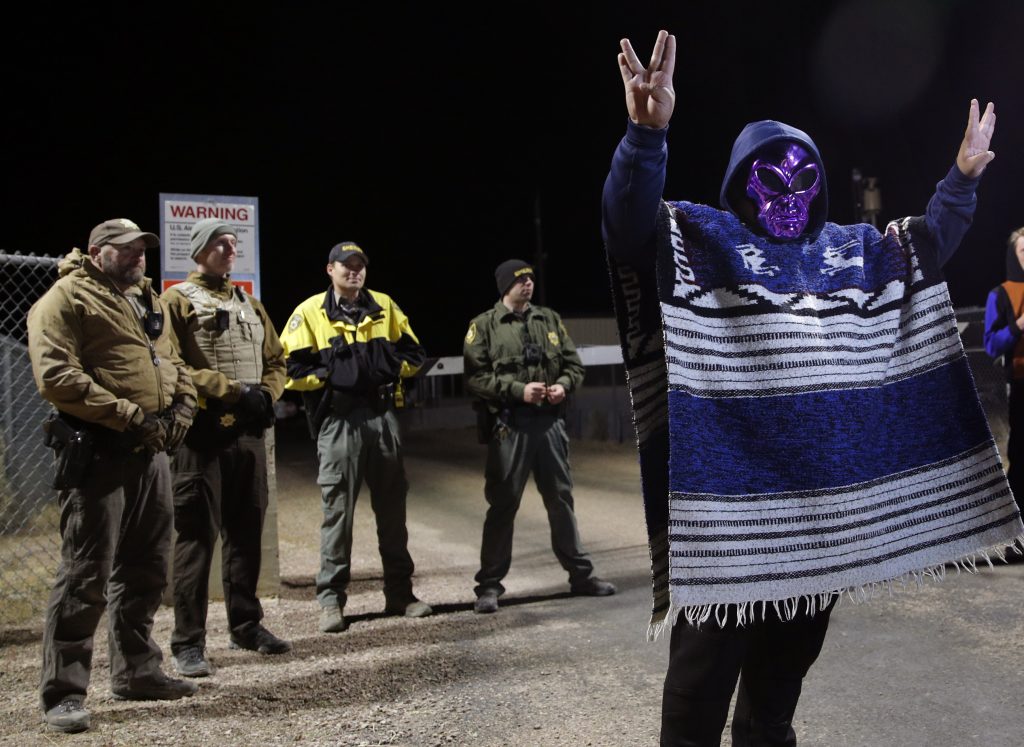 About 75 people arrived early Friday at a gate at the once-secret Area 51 military base in Nevada — at the time appointed by an internet hoaxster to “storm” the facility to see space aliens — and one person was arrested, authorities said.

The “Storm Area 51” invitation spawned festivals in the tiny Nevada towns of Rachel and Hiko nearest the military site, a more-than-two-hour drive from Las Vegas.

Lincoln County Sheriff Kerry Lee estimated late Thursday that about 1,500 people had gathered at the festival sites and said more than 150 people also made the rugged trip several additional miles on bone-rattling dirt roads to get within selfie distance of the gates.

Millions of people had responded to a June internet post calling for people to run into the remote U.S. Air Force test site that has long been the focus of UFO conspiracy theories.

“They can’t stop all of us,” the post joked. “Lets see them aliens.”

The military responded with stern warnings that lethal force could be used if people entered the Nevada Test and Training Range, and local and state officials said arrests would be made if people tried.

“It’s public land,” the sheriff said. “They’re allowed to go to the gate, as long as they don’t cross the boundary.”

A music group erected a stage Thursday near the Little A’Le’Inn in Rachel and began playing after dark for several hundred campers who braved overnight temperatures around 45 degrees.

Daniel Martinez, 31, a Pokemon collectible cards dealer from Pomona, California, was among the first to whirl and dance at the dusty makeshift festival grounds — warm beneath a wolf “spirit hood” and matching faux fur jacket.

“Here’s a big open space for people to be,” he said. “One person starts something and it infects everybody with positivity. Anything can happen if you give people a place to be.”

The entertainment kicked off weekend events that also feature a gathering Friday and Saturday at the Alien Research Center souvenir store in Hiko.

Owner George Harris said it would focus on music, films and talks about extraterrestrial lore.

Authorities reported no serious incidents related to festivals scheduled until Sunday. Hiko and Rachel are about a 45-minute drive apart on a state road dubbed the Extraterrestrial Highway, and a two-hour drive from Las Vegas.

Michael Ian Borer, a University of Nevada, Las Vegas, sociologist who researches pop culture and paranormal activity, called the festivities sparked by the internet joke “a perfect blend of interest in aliens and the supernatural, government conspiracies, and the desire to know what we don’t know.”

The result, Borer said, was “hope and fear” for events that include the “Area 51 Basecamp” featuring music, speakers and movies in Hiko, and festivals in Rachel and Las Vegas competing for the name “Alienstock.”

“People desire to be part of something, to be ahead of the curve,” Borer said. “Area 51 is a place where normal, ordinary citizens can’t go. When you tell people they can’t do something, they just want to do it more.”

Eric Holt, the Lincoln County emergency manager, said he believed authorities could handle 30,000 visitors at the two events. Still, neighbors braced for trouble after millions of people responded to the “Storm Area 51” social-media post weeks ago.

“Those that know what to expect camping in the desert are going to have a good time,” said Joerg Arnu, a Rachel resident who can see the festival grounds from his home.

Those who show up in shorts and flip-flops will find no protection against “critters, snakes and scorpions.”

“It will get cold at night. They’re not going to find what they’re looking for, and they are going to get angry,” Arnu said.

The Federal Aviation Administration closed nearby airspace, although Air Force jets could be heard in the sun-drenched skies, along with an occasional sonic boom.