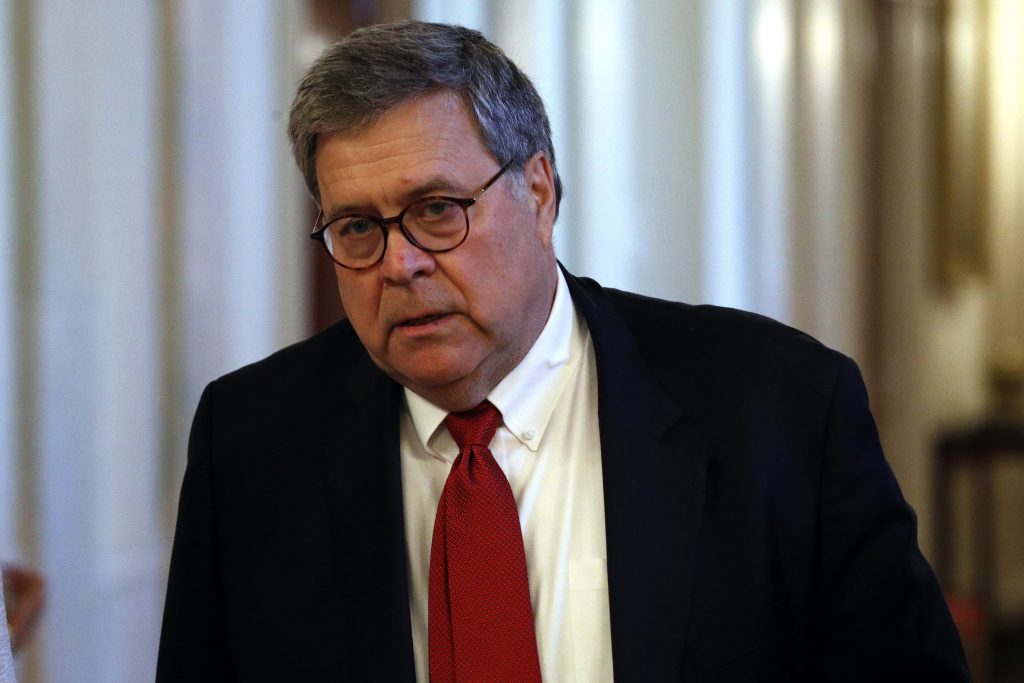 In a Fox News interview, Trump said no deal is imminent, more than six weeks after mass shootings in Texas and Ohio killed more than 30 people.

“We’re going very slowly,” Trump said, adding that while he doesn’t want “bad people” to have weapons, he won’t allow any plan to move forward that takes guns away from law-abiding people or restricts Second Amendment rights.

A proposal being floated by Barr would require background checks on all commercial gun sales, including at gun shows.

The leaked proposal caused an uproar on Capitol Hill as lawmakers wondered whether Trump was poised to support expanded background checks in the face of opposition from fellow Republicans and the National Rifle Association.

But speaking to reporters on Air Force One as he returned home from California late Wednesday, Trump said the plan was just one of many ideas under consideration.

“Those are ideas that we’re talking to Republicans, Democrats, everybody about. Some they like, some they don’t like. Just a series of concepts,” Trump said.

Trump told Fox that a call by Democratic presidential candidate Beto O’Rourke to confiscate assault-style rifles has made it more difficult for Republicans to reach agreement on gun control.

“… yes, we’re going to take your AR-15, your AK-47, and we’re not going to allow it to be used against your fellow Americans anymore,” O’Rourke, a former Texas congressman, declared during a Democratic presidential debate last week.

“Dummy Beto made it much harder to make a deal,” Trump tweeted Wednesday. “A lot of people think this is just a way of taking away guns,” Trump told Fox, adding that he won’t let that happen.

Asked about the proposal to expand background checks for gun purchases, Trump distanced himself, saying the document was put out by Barr.

Still, Trump said Barr was working on his behalf to try to reach a deal. “We got Bill Barr involved. He’s an expert on guns and gun control,” Trump said.

Barr and Eric Ueland, the White House director of legislative affairs, have been meeting with lawmakers to talk about ways to reduce gun violence. Among the things they have discussed is a one-page document that would require background checks on all advertised commercial gun sales. The plan builds on a proposal by Sens. Joe Manchin, D-W.Va., and Pat Toomey, R-Pa., to expand background checks.

Asked whether he would recommend the background check plan to Trump, Barr said “a number of different proposals” were being considered.

Even so, the NRA weighed in immediately, calling the proposal “a non-starter” with the NRA and its 5 million members.

Manchin, who met with Barr on Wednesday, along with Toomey and Sen. Chris Murphy, D-Conn., said he remained hopeful.

Referring to Barr, Manchin said, “I think we’re close to where he can take something to the president, to see if the president really wants to do something” on gun control.

Toomey said Barr’s idea “is a mechanism for expanding background checks beyond what we have today. I have (Republican) colleagues who are open to that, so I’m modestly encouraged.”

Trump has previously pledged to veto a House-passed bill to expand background checks for gun purchases, but McConnell said he is hopeful there are other gun-related proposals that Congress can approve and Trump can support.

Trump and White House aides have discussed a number of gun control measures with lawmakers, including steps to go after fraudulent buyers, notify state and local law enforcement when a potential buyer fails a background check, issue state-level emergency risk protection orders, boost mental health assistance and speed up executions for those convicted of mass shootings.

Senate Minority Leader Chuck Schumer and House Speaker Nancy Pelosi have warned Trump that gun-control legislation must include the House-passed bill to expand background checks. Any proposal that does not include the House legislation “will not get the job done” because dangerous loopholes will be left open, the Democrats said.