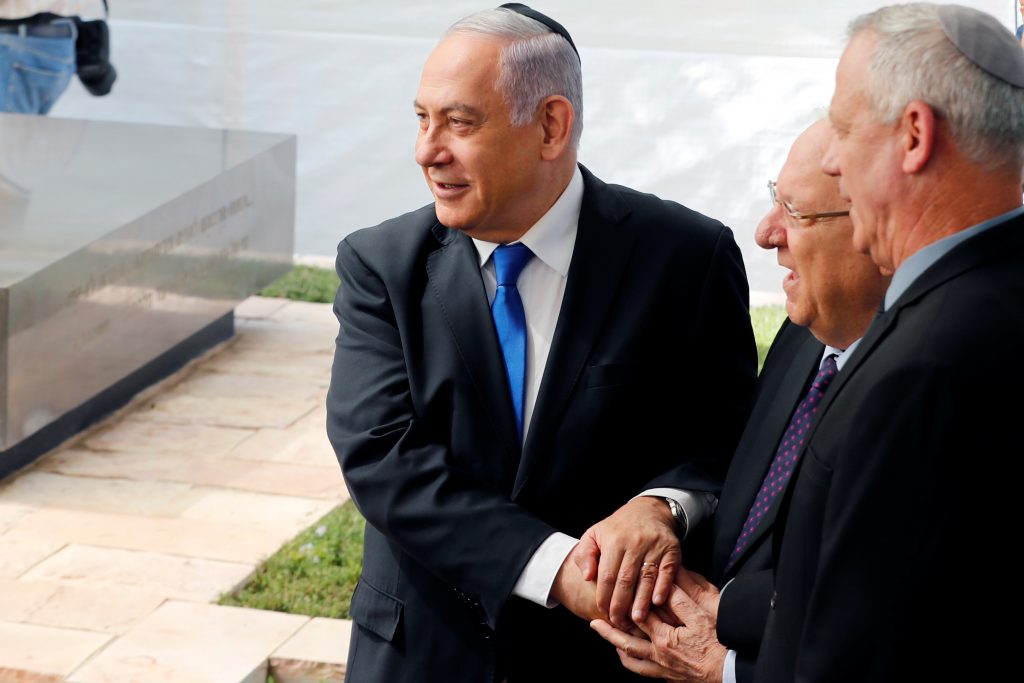 Binyamin Netanyahu’s office on Thursday called for Blue and White head Benny Gantz to meet with the prime minister to discuss the possibility of a unity government – and while it’s not clear that such a discussion was held, the two did meet at a memorial marking the anniversary of the passing of former President Shimon Peres. The two appeared in good spirits as they shook hands after the ceremony at Mt. Herzl in Yerushalayim. President Reuven Rivlin also appeared cheered at the prospect of the two rivals getting along, at least in their first face-to-face meeting since the beginning of the just-finished election campaign.

In his remarks at the event, Rivlin said he would “do everything necessary to avoid a third round of elections and to work for the establishment of a unity government. The period of temporary government that we are currently in has been going on for far too long, and it is badly damaging the ability of the government to make decisions for the benefit of Israelis. We must have a government in order to deal with the security, political and economic challenges we face.”

Rivlin also commended Netanyahu for his statement earlier Thursday, when the prime minister said that the only choice at this point was a unity government. “I congratulate you, Mr. Prime Minister, for joining the calls for a unity government. The responsibility for this lies on the shoulders of the heads of the large parties. The Israeli people have had their say. Next week, when the heads of the parties come to make their recommendations, they will have to explain to me and all of Israel what they intend to do to ensure that a stable government is formed.”

Netanyahu also spoke at the event, recalling another unity government. “When there was no clear mandate from the people” in the elections of 1984, “Shimon proposed a unity government. He agreed with Yitzchak Shamir on working together. We have a similar situation in the current elections, where there is no clear winner. We should be taking the same tact here as well. I call on Benny [Gantz] to meet with me, as the president himself has suggested, to create a unity government that includes all those who believe in Israel as a Jewish and Democratic state.”

Earlier, Netanyahu said in his first official statement about the prospects for a new government that it appeared that there was no choice but to set up a unity government. “During the election campaign I called for a rightwing government, but unfortunately, based on the results, it does not appear that that will be possible,” Netanyahu said. “Therefore, there is no choice but to establish a large unity government, as large as possible, that will include all groups who value the State of Israel.”

In response to that statement, Kan News quoted officials in Blue and White as saying that it was “unbelievable. This is just another pathetic media ‘spin’ by Netanyahu. He is a dangerous man, disconnected from reality, refusing to accept the results of the election. Since when do the losers invite the winners for talks? We want a unity government too, but we will be the ones to form it,” the officials were quoted as saying.