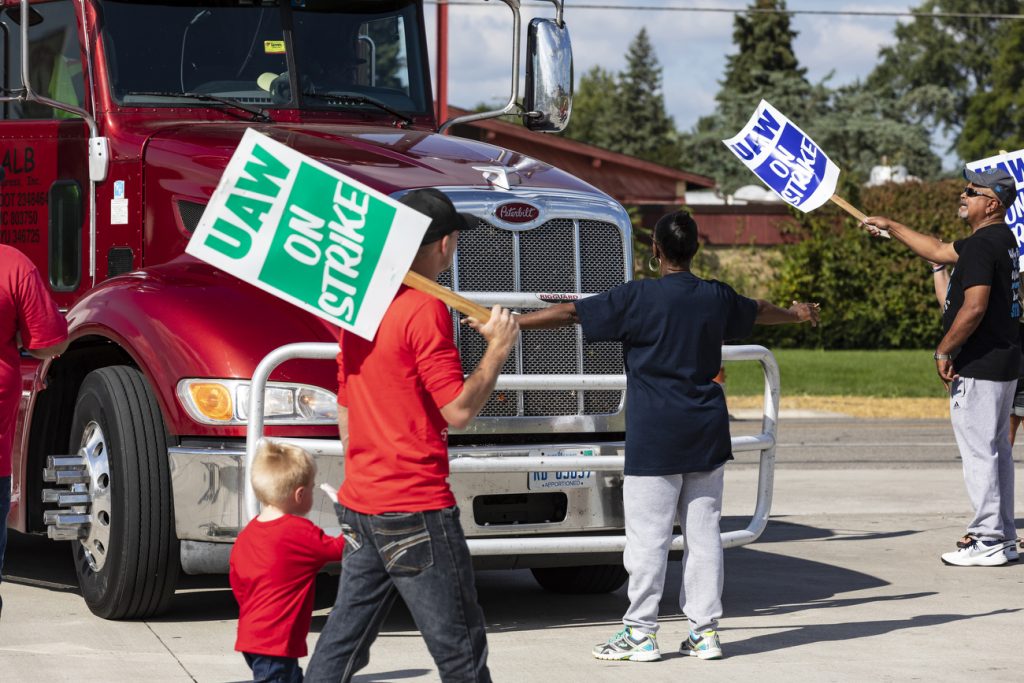 Union and company bargainers are making progress toward a new contract as a strike by United Auto Workers brought 33 General Motors factories to a halt continued into its third day.

Committees working on thorny issues such as wages, health insurance costs, use of temporary workers, and new work for plants slated to close met until early evening Tuesday, and are scheduled to resume bargaining early Wednesday.

More than 49,000 workers walked off their jobs on Monday in a dispute over the union’s quest to get a bigger share of GM’s profits and the company’s goal of cutting labor costs so they are closer to those at U.S. auto plants run by foreign companies.

On the picket lines, many workers were hoping for a quick resolution, but said they are willing to stay out as long as needed.

“I can’t see this lasting too long,” said machinist Clarence Trinity as he carried a union sign at GM’s engine and transmission factory in the Detroit suburb of Romulus, Michigan. “Both sides are losing bad.”

Citi analyst Itay Michaeli, in a note to investors, estimated that the strike is costing the company $100 million per day in earnings. However, GM has enough inventory to supply dealers for 77 days at the current sales pace, although it is running lower on big SUVs, according to Cox Automotive.

If the strike ends soon, GM will be able to crank up production to make up for lost production time and mitigate some of the losses. But if it lasts more than a week, it will start to affect production in Canada and Mexico, putting more pressure on GM’s inventory. If supplies dwindle, consumers may go to other brands, costing GM sales and market share.

GM and the union are negotiating at a time of troubling uncertainty for the U.S. auto industry.

GM is facing weakening sales, a deteriorating global economy and an unpredictable trade war as it tries to keep its labor costs in check through 2023. But workers want a bigger share of GM’s healthy profits, which totaled more than $30 billion in the past five years.

Driven up by the longest economic expansion in American history, auto sales appear to have peaked and are heading down. Long-term challenges also loom: GM and other carmakers are struggling to make the transition to electric vehicles.

Gary Chaison, professor emeritus of industrial relations at Clark University in Massachusetts, expects the strike to end within a week. He sees it as more of a message to show how effective the union is, especially for nonunion workers who might be asked to join the UAW.

GM’s offers, he said, seem to be pretty good, so the strike is a mystery to him. “I can’t see a prolonged strike coming out of this,” he said. “I think there’s too much to lose and not enough to gain.”