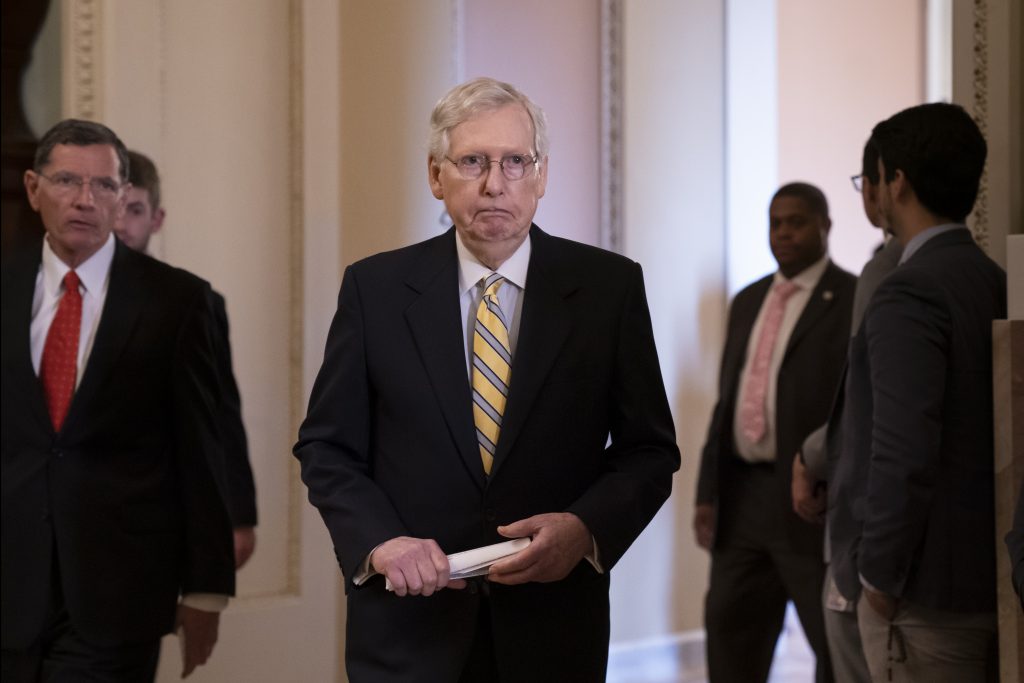 Senate Democrats Wednesday blocked debate on the almost $700 billion Pentagon budget and other spending bills amid a feud between the chamber’s leaders over the rules of engagement for translating this summer’s hard-won budget deal into binding legislation.

Minority Leader Chuck Schumer orchestrated the party-line filibuster vote, claiming Senate GOP leaders were doing President Donald Trump’s bidding on the U.S.-Mexico border fence and paying for it by shortchanging health and education programs. Both sides accused the other of violating the bipartisan spirit of July’s budget blueprint, which gave Trump a must-have increase in the government’s borrowing limit and new spending “caps” to avert sweeping cuts to the Pentagon and domestic programs.

Democrats are chiefly upset that the Senate GOP would permit Trump to again shift money from military accounts to wall funding that he has otherwise been unable to win from Congress. He’s seeking $5 billion after winning only $1.4 billion for the current year.

“It does nothing to prevent the president from stealing billions of dollars more from our troops to pay for the president’s cynical campaign promise to build a gigantic wall across our southern border,” said top Appropriations Committee Democrat Patrick Leahy of Vermont. “The president has already raided $6.1 billion from Department of Defense accounts in the fiscal year 2019 bills for his border wall — all without congressional approval.”

Republicans countered that Democrats are injecting wall-related fights with Trump into a time-tested appropriations process that relies on bipartisanship and compromise that is in increasingly short supply in the halls of Congress.

“Congressional leaders and the president laid the groundwork for sensible, bipartisan funding process. But instead, over the past week and a half we’ve seen our Democratic colleagues suggest that they may try to shoe horn their long-standing disagreements with President Trump into this appropriation process,” McConnell said. The Kentucky Republican said Democrats should chill out and let the process advance — knowing that Democrats controlling the House will have their back in upcoming negotiations.

Appropriations Committee Chairman Richard Shelby added that the terms of July’s budget pact guaranteed Trump’s powers to transfer billions of dollars around within the Pentagon’s budget.

“Our Democratic colleagues may now regret having agreed to these terms, but that does not change the fact that they did,” Shelby said.

It’s unclear what the next steps will be, though both sides have come too far to let a spat over tactics derail the spending bills, which are main must-do business for Congress each year. The ultimate backstop for Senate Democrats is House Speaker Nancy Pelosi, who will play a key role in talks down the road and is chiefly interested in getting negotiations under way.

House Democrats, who have passed most of the spending bills under terms generous to domestic agencies, are eager to kick-start negotiations in hopes of wrapping up the $1.4 trillion appropriations bundle before Thanksgiving.

“They know what they have to do,” Pelosi said Wednesday as she shuttled between meetings. “Hopefully they’ll get moving so we can have this all done in a predictable, well organized way.”

To buy time, both House and Senate are set to pass a government-wide stopgap spending bill that would keep the lights on through Nov. 21. There seems to be no risk of a government shutdown when the budget year ends on Sept. 30, as fights over the wall and other hot-button issues are being put off until later.

The stopgap measure, known as a continuing resolution, is likely to be unveiled Wednesday. Talks have taken longer than hoped as Pelosi and Republicans have wrangled over the details of the legislation, including add-ons like replenishing farm bailout accounts and a variety of expiring health care provisions. It would also extend the charter of the Export-Import Bank and continue the federal flood insurance program.