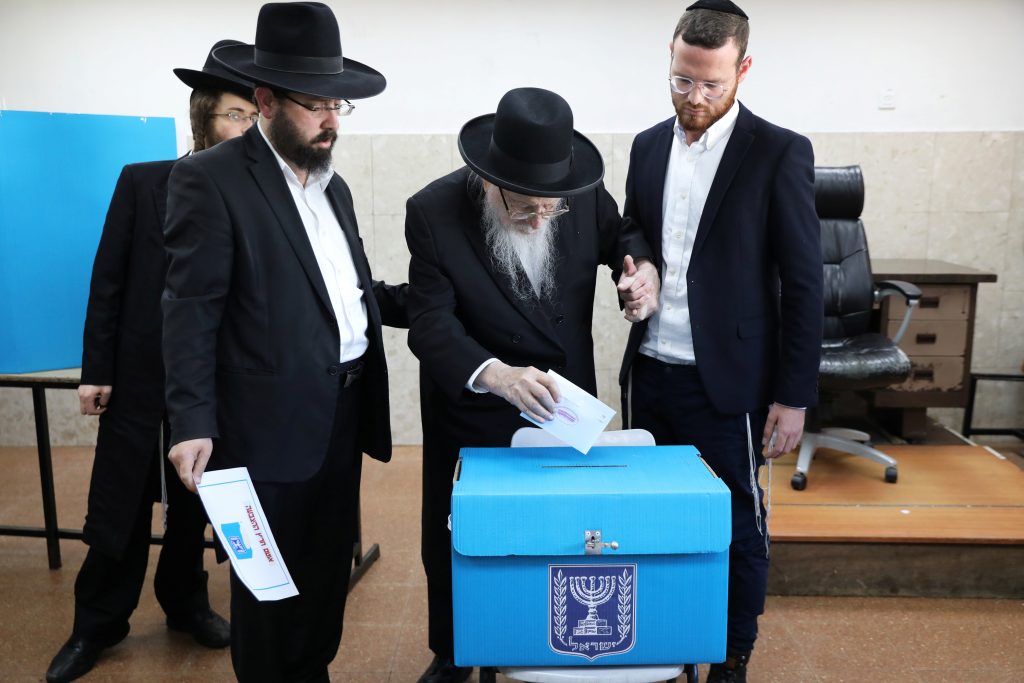 Voting in Israel proceeded on Tuesday as election officials, political parties and the media were poised for any reports of fraud, violence or other illegal activities, such as bringing cameras into polling stations.

As of early Tuesday evening, violations appeared to be minor and scattered under the watchful eye of some 20,000 police and 3,000 election inspectors.

In the most serious incident so far, the Central Elections Committee said police temporarily closed five polling stations in the northern Druze town of Yarka over voting irregularities. Once reopened, the stations will remain open until midnight, two hours longer than the 10 p.m. closing time elsewhere, the committee announced. According to CEC director Orly Adas, ballot envelopes were found missing in one station, and were then recovered when a local woman was caught attempting to stuff them in the ballot box. All the voting and counting of votes is by hand.

A number of cases of vandalized ballot slips prompted the EEC to validate those defaced by extraneous marks or holes punched in them. Apparently, certain miscreants have been out to invalidate the ballot slips of parties they oppose while they stand behind the voting partition where privacy is guaranteed.

Elections chief Justice Hanan Melcer therefore instructed officials to count as valid “slips with small holes or on which someone may have drawn with a pen or sketched on the back or the front in a way that makes clear the drawing was intended to invalidate the slip,” the committee said in a statement.

Two Likud activists were caught masquerading as Labor-Gesher activists who had infiltrated two polling stations in Bnei Brak. A complaint was filed.

Prime Minister Binyamin Netanyahu’s social media was reinstated after Likud MK David Bitan promised it will no longer be used to publish poll results, which is illegal on election day. The reinstatement is also conditioned on Netanyahu stopping his illegal media interviews, which are also not allowed on election day. CEE chairman Hanan Melcer asked the social network to shut down the account, but allowed it to operate again after two hours.

The Blue-and-White website was hit by a major cyber-attack (DDOS) involving over 500 assaults from various servers abroad at around 7 p.m., forcing it to shut down, the party reported.

Nobel laureate Yisrael Aumann alleged that Otzma Yehudit “spread a false report” of his endorsement of the far-right party. However, he explained that his decision not to support them was not because he disagreed with their policies, but because he didn’t think they would pass the 3.25 percent electoral threshold.

“I said that if there was a reasonable chance that they’ll pass the threshold, then maybe it would be worthwhile to help them do so,” the eminent mathematician told the Srugim website. “But I added that in my view the polls showing them getting four seats was spin, that they don’t have a reasonable chance of passing the threshold, and that [voters] should back Yamina.” Professor Aumann filed a complaint with the CEE

Some reports of wrongdoing were found to be erroneous. Channel 13 reported that Likud installed dozens of “face-recognizing” cameras outside Arab polling stations, but retracted after the reporter clarified on Twitter that “‘Face recognition’ — Likud means it will watch the video afterwards and mark down faces. This isn’t some amazing technology.”

The Central Elections Committee denied a media report claiming that it had ruled not to count votes for the far-right Otzma Yehudit party because of widespread voter fraud. A spokesman for Melcer said the report was false.