Save the Mustard Seed 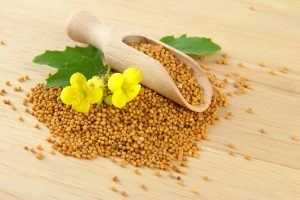 A Nordic effort reminds us of a mitzvah for our time.

As Jews the world over listened to Krias HaTorah on Shabbos morning Parashas Shoftim, someone at The New York Times was preparing to post a news story quite pertinent to a passuk in the parashah, although he or she was likely oblivious to the connection.

The passuk (Devarim 20:19) forbids the destruction of a fruit tree even during a war, and is the source for the prohibition of bal tashchis, the wanton destruction of anything useful.

The story, which appeared the very next day, was datelined Helsinki, Finland, and described “Happy Hour” at one of a supermarket chain’s 900 stores, all of which steeply discount hundreds of items about to run afoul of their expiration dates. Finns crowd the stores to buy the goods.

According to the U.N. Food and Agriculture Organization, close to a third of the food produced and packaged for human consumption is lost or wasted. Here in the United States, nine out of 10 supermarket chains assessed last year by a nonprofit group, the Center for Biological Diversity, were given a C grade or lower on food-waste issues.

We citizens of industrialized Western countries live, baruch Hashem, in a world of plenty. Suffering poverty might tempt someone to steal or cheat. But swimming in a sea of abundance presents its own challenges — like the temptation to overindulge, with the resultant obesity and other health risks. And, for Klal Yisrael, the inadvertent flouting of bal tashchis.

I know from speaking with others that I am not the only one whose parents rinsed out plastic cups instead of throwing them away, or who refrigerated even small amounts of a meal’s leftovers rather than consigning them to the garbage, or who opted to darn holey socks instead of just tossing them out and buying a new pair.

And I know, too, that I’m not the only one who tries — even if very imperfectly — to maintain the mindset that yields such practices. It is, after all, a very Jewish mindset.

Some stereotypes are outright falsehoods. Mexicans may take siestas (as do many Israelis) during the hottest time of the day, but all the workers from south of the border whom I’ve observed have been anything but lazy; in fact they are exceedingly hardworking.

The stereotype of Jews as penny-pinching, however, isn’t necessarily false, only mischaracterized. While there may be people who are stingy for selfish reasons, frugality can — and in Yiddishkeit is meant to — bespeak a deep appreciation for the worth of every single resource with which Hashem has gifted us.

We are enjoined by the Torah to not waste materials or money. When it comes to tzekakah, “Each and every penny,” Rabi Elazar is famously quoted as saying, “adds up to a fortune” (Bava Basra 9b). And fortunes, we all know, can be put to very worthy and effective use. Those same Yidden from previous generations who sewed up holes in clothing and reused disposable utensils were impressively generous with their resources when it came to helping others.

There are, to be sure, situations where destroying or discarding a useful item is permitted, as when a greater good is thereby accomplished, or where there is some special need. Here is not the place to enter the realm of the halachic implications of our throwaway society. But the fact that there actually exist such concerns with common contemporary practices is something that deserves our consideration.

The Finnish effort was spurred by the increase in greenhouse gas emissions and the effects of climate change. Still and all, it might serve to stimulate us to take bal tashchis more seriously in this era of abundance and at this annual time of teshuvah. Whatever our thoughts about carbon footprints, we are enjoined to recognize that wasting any resource debases it, and us.

Every year on Shabbos Parashas Shoftim, I reread the words of the Sefer Hachinuch (mitzvah 529). He explains that the bal tashchis prohibition aims to “teach our souls to love what is good and useful, and to then cleave to it,” adding that “through this, the good will cleave to us and we will distance ourselves from every evil thing and every destruction. This is the way of exemplary Jews, who love peace, rejoice in the good of creation and bring everyone close to the Torah.

“They do not destroy anything — even a mustard seed — and it pains them to encounter any destruction or harm. If they can act to save anything from destruction, they use all their strength to do so.

“Not so,” he adds by contrast, is the way of resha’im, “the cohorts of mazikim [destructive forces], who rejoice in destroying the world.”

That attitudinal polarization is well evident in our world. Broken windows, smashed bottles and graffiti-marred walls are the yield of one end of the spectrum.

And rinsed-out plastic cups in dish drainers, with filled-to-their-brims tzedakah boxes on nearby kitchen window sills, the other.