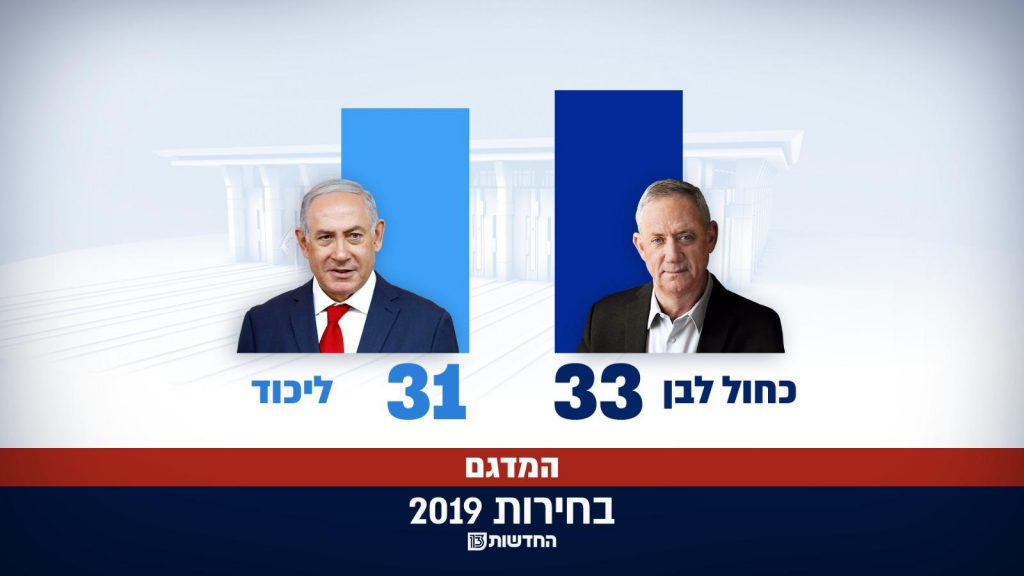 Chareidi parties performed beyond expectations, with Shas getting 9 seats in the Knesset and United Torah Judaism 8, according to two polls, 8 and 8 according to a third. Netanyahu reportedly has already phoned Rabbi Aryeh Deri of Shas and Rabbi Yaakov Litzman of UTJ to invited them to join his coalition.

Avigdor Liberman’s Yisrael Beytenu was seen with 8-10 seats. The news was greeted with victory whoops at their campaign headquarters, as once again Liberman holds the keys to a Netanyahu government. Unless, that is, the prime minister can win Labor-Gesher over to his side, with possibly a little help from one or two MKs pried from Blue and White.

All three exit polls said that the far-right Otzma Yehudit was wiped out with 0 Knesset seats, having fallen short of the electoral threshold, a loss of tens of thousands of votes that leaders on the right had been warning about for weeks. The outcome was met with shock and “utter silence” at party headquarters, according to Times of Israel. Party leader Itamar Ben-Gvir had predicted they would be in the next Knesset, and thus refused to back out of the race.

Party officials began reacting to the preliminary results. Blue and White MK Yoaz Hendel proclaimed “the Netanyahu era is over” and called for a unity government without him.

Likud Minister Tzachi Hanegbi, on the other hand, said he’s “convinced” that the exit polls are all wrong. Netanyahu “will continue to lead us for the next five years,” he declared.

Culture Minister Miri Regev (Likud) told Ynet that the party will stick with Netanyahu as its leader, regardless of the election outcome.

Speaking to journalists, Likud MK Yoav Kisch said he believes that “Binyamin Netanyahu will either be prime minister or we will go to third elections, I can’t see another option.” Kisch added that “we must wait for the final results which I hope will be better for Likud.”

The Joint List was jubilant as the polls showed it regaining its lost strength of 13 seats, at least according to one poll.

“The Netanyahu era is over. We are back as the third largest party in the Knesset,” declared party leader Ayman Odeh triumphantly, according Kan. The Arab parties ran on two separate slates in April, receiving just 10 seats combined. In 2015, they had 13 seats.

But it’s all premature. The official election results will not be known until sometime Wednesday morning, possibly not until the afternoon.

The Times of Israel cautioned readers to “bear in mind: The [exit polls] in the past have been wildly off-mark and should be viewed with a fair measure of skepticism.”

“In April, for example, Channel 12 gave Blue and White 37 seats, compared to 33 for Likud. Channel 13 — the most accurate of the batch — said the two largest parties would tie at 36 seats, but had the New Right passing the electoral threshold. And Kan also gave Blue and White a slight edge, with 37 seats (and 36 for Likud). In the end, the two parties received 35 seats,” and New Right got none.

What this means is that since the leader of the party with the most seats is customarily given first opportunity to form a coalition government, that won’t be known until Wednesday.

Twenty were arrested and 69 investigated for breaking election laws during the day. But the disruptions that had been feared did not materialize.

Here are the results so far published: