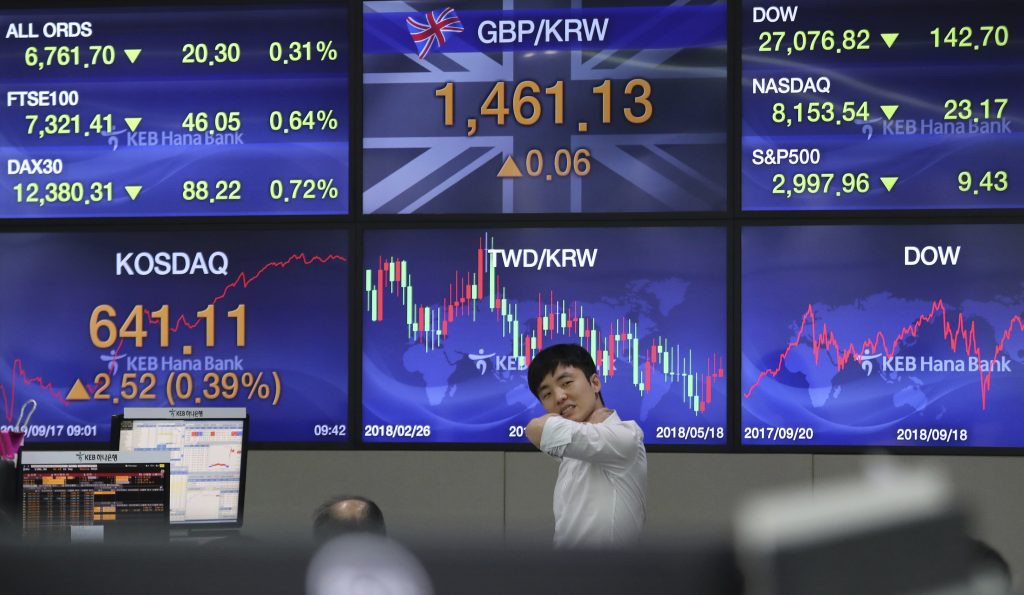 The U.S. and international benchmarks for crude fell back slightly after vaulting more than 14% overnight after an attack on Saudi Arabia’s largest oil processing plant.

But the Shanghai Composite index skidded 1.7% to 2,978.71 and Hong Kong’s Hang Seng slipped 1.0% after Moody’s shifted its outlook to “negative.” Fitch Rating did so earlier.

Moody’s said in a statement that the protests and their handling showed weaknesses in Hong Kong’s institutions. The turmoil was “damaging its attractiveness as a trade and financial hub,” it said.

Elsewhere in Asia, India’s Sensex fell 0.8%. Shares also lost ground in Taiwan and Singapore but rose in Indonesia and Thailand.

Shares of oil producers jumped, while prices for Treasurys, gold and other investments seen as less risky rose.

The weekend attack on the Saudi Aramco plant halted production of 5.7 million barrels of crude a day, more than half of Saudi Arabia’s global daily exports and more than 5% of the world’s daily crude oil production.

The attack raised worries about the risk of more disruptions in the supply of oil at a time when the global economic outlook is clouded by uncertainty.

Still, analysts expressed doubts that the disruption in Saudi Arabia’s oil production would have much of an impact on the U.S. economy, at least in the short term.

The bigger concern is over whether there might be more attacks.

The double-digit spike in crude prices on Monday was comparable to a 14.5% jump on Aug. 6, 1990, following Iraq’s invasion of Kuwait.

The spike in oil prices has helped oil producers but weighed on shares in airlines, whose operations can be hurt by any rise in the price of fuel.

Concern over higher oil prices in a region heavily dependent on imports from the Middle East is understandable, Mizuho Bank said in a commentary.

“Higher oil imports will weigh on trade balances. For countries that are running trade deficits, such as Indonesia and Philippines, this will widen their deficit and subsequently exert downward pressure on the currency. A weakened currency will then push up oil import bill further,” it said.

However, it added that there is still no cause for excess concern.

The oil price gyrations have somewhat overshadowed this week’s headline event, the Federal Reserve’s meeting on interest rates. Investors are confident the central bank will cut short-term rates by a quarter of a percentage point to a range of 1.75% to 2%. It would be the second such cut in two months, as the Fed tries to protect the economy from a global slowdown and the effects of the U.S.-China trade war.