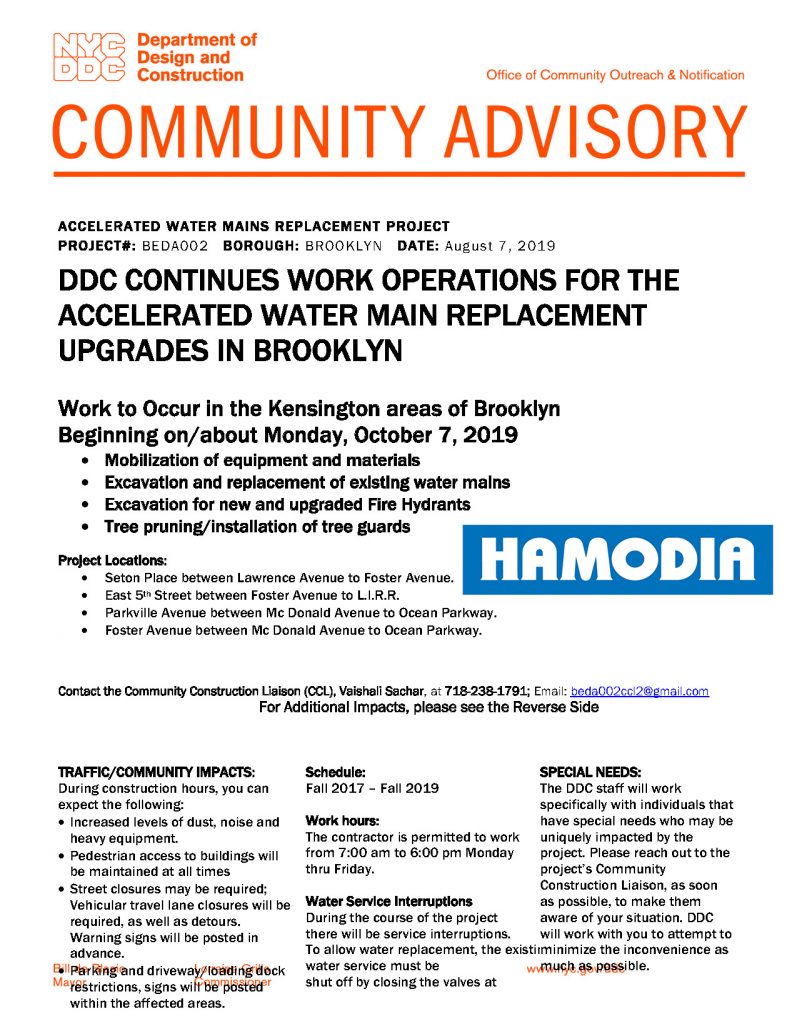 A planned water-main replacement project in Kensington has been postponed until after the upcoming Yamim Tovim, following advocacy from local officials.

The city’s Department of Design and Construction last month began to post notices of the planned work in the neighborhood, set to begin Monday, October 7, one week before Sukkos.

Jewish residents were dismayed to learn that the equipment setup and work would take place over the Yamim Tovim, causing a major inconvenience during what is generally a busy shopping period followed by a peaceful time that includes large family gatherings. Even if the actual work wouldn’t begin until later, merely having the equipment on the streets from Rosh Hashanah through Sukkos would mean a significant loss of parking spaces over the holidays in an already heavily congested area.

Many constituents reached out to state Sen. Simcha Felder, himself a Kensington resident.

In a letter to DDC Commissioner Lorraine Grillo in early August, Felder wrote, “Any disruption of water service to residents during [the holidays] would cause immense hardship and create a crisis across the neighborhood. Moreover, any street closures during this same time would unfairly and adversely impact local traffic, which is already heavily burdened during this time. I hope the scheduling of this project was simply an oversight.”

Following an intense advocacy effort by Felder along with city Councilman Kalman Yeger, district manager of Community Board 14 Shawn Campbell and Pinny Ringel, community liaison to the mayor’s office, DDC agreed to direct its contractor not to perform any work in Kensington or to store any materials on the street between September 23 and October 23, the day after Simchas Torah.

“Unfortunately, it is not shocking when cultural sensitivity falls short of religious sensitivity; nevertheless, this was an egregious example,” Felder told Hamodia. “The timeline we requested was the bare minimum required to respect the needs of the community and was non-negotiable. It took some time, but I am thankful to the DDC for redirecting their resources and rescheduling the project so that the community can prepare for and enjoy Yom Tov in peace.”

“Thanks to Senator Felder’s quick advocacy,” Councilman Yeger told Hamodia, “our Kensington neighbors can count on having their neighborhood back during the busy month of Yamim Tovim. I’m thankful the city agreed to our request to give us back our streets – a reasonable accommodation for our traffic-congested community.”