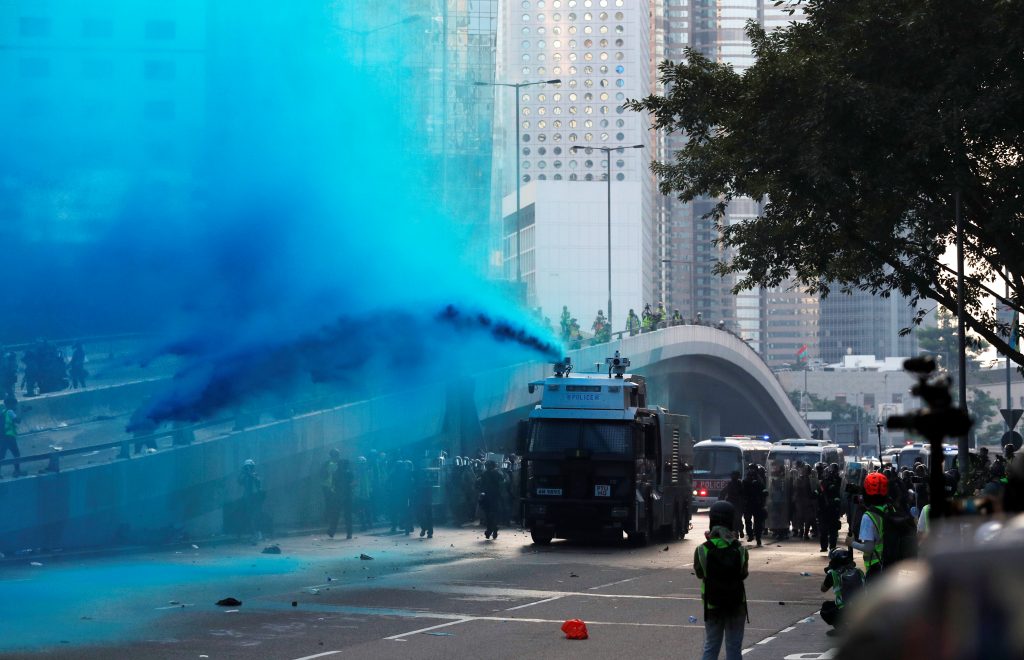 Hong Kong police fired water cannons and volleys of tear gas to break up protesters throwing petrol bombs and bricks near the Legislative Council building and central government offices on Sunday, the latest in weeks of sometimes violent unrest.

Some protesters threw bricks at police outside the nearby Chinese People’s Liberation Army base in the city and tore down and set fire to a red banner proclaiming the 70th anniversary on Oct. 1 of the founding of the People’s Republic of China.

One water cannon caught fire after being hit by a petrol bomb. The water cannon fired blue jets of water, used elsewhere in the world to help identify protesters later.

“Police warn the protesters to stop their illegal acts and leave the scene immediately,” police said in a statement.

The Chinese-ruled territory has been rocked by more than three months of clashes, with demonstrators angry about what they see as creeping interference by Beijing in their city’s affairs despite a promise of autonomy.

On July 1, the anniversary of the city’s 1997 return to China, protesters wearing hard hats, masks and black shirts laid siege to the Legislative Council building and swarmed inside.

Earlier in the day, protesters gathered peacefully outside the British Consulate, calling on Britain to rein in China.

The Sino-British Joint Declaration, signed in 1984, lays out Hong Kong’s future after its return to China in 1997, a “one country, two systems” formula that ensures freedoms not enjoyed on the mainland.

“Sino-British Joint Declaration is VOID,” one placard read in the protest outside the British Consulate.

“One country, two systems is dead,” protesters shouted in English under umbrellas shielding them from the sub-tropical sun, some carrying the colonial flag also bearing the Union Jack. “Free Hong Kong.”

Violence has broken out on previous weekends with protesters trashing metro stations and setting fires in the streets. The police have responded with tear gas, rubber bullets and water cannons.

The spark for the protests was planned legislation, now withdrawn, that would have allowed people to be sent to mainland China for trial.

The protests have since broadened into calls for universal suffrage.

China says it is committed to the “one country, two systems” arrangement, denies meddling and says the city is an internal Chinese issue. It has accused foreign powers, particularly the United States and Britain, of fomenting the unrest and told them to mind their own business.

Britain says it has a legal responsibility to ensure China abides by the 1984 declaration.

Hong Kong island was granted to Britain “in perpetuity” in 1842 at the end of the First Opium War. Kowloon, a peninsula on the mainland opposite Hong Kong island, joined later, after the Second Opium War.

The colony was expanded to include the New Territories, to the north of Kowloon, on a 99-year lease, in 1898.

Britain returned all of the territory to China, which never recognized the “unequal treaties,” in 1997.

“The Joint Declaration is a legally binding treaty between the U.K. and China that remains as valid today as it was when it was signed and ratified over 30 years ago,” a British Foreign Office spokeswoman said in June.

“As a co-signatory, the U.K. government will continue to defend our position.”

But it was not immediately clear what Britain could or would want to do to defend that position. It is pinning its hopes on closer trade and investment cooperation with China, which since 1997 has risen to become the world’s second-largest economy, after it leaves the European Union at the end of next month.