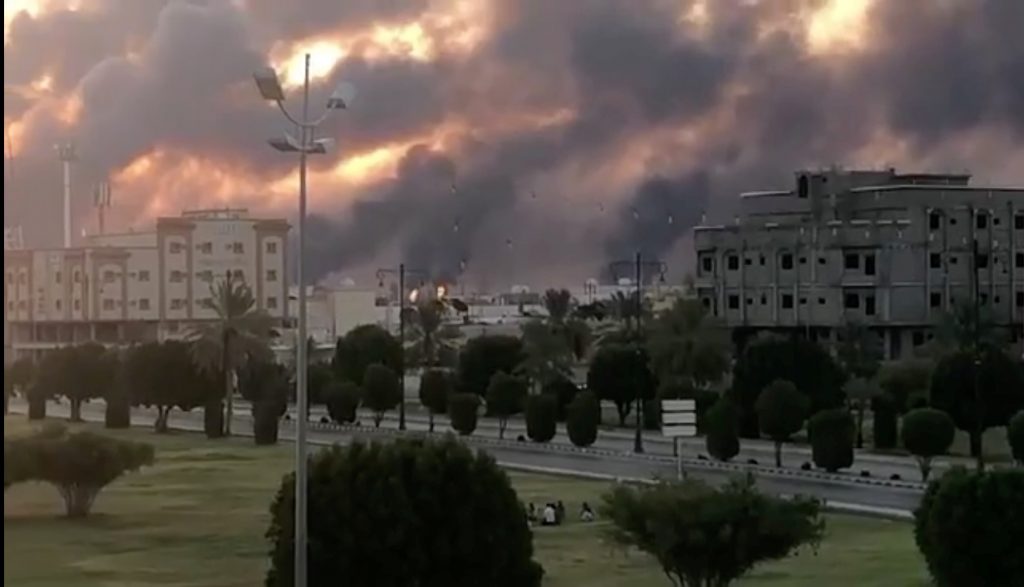 It remained unclear hours later if anyone was injured at the Abqaiq oil processing facility and the Khurais oil field or what effect the assault would have on oil production. Smoke from the fires could be seen by satellites.

The attack by the Iranian-backed Houthis in the war against a Saudi-led coalition comes after weeks of similar drone assaults on the kingdom’s oil infrastructure, but none of the earlier strikes appeared to have caused the same amount of damage. The attack likely will heighten tensions further across the Persian Gulf amid an escalating crisis between the U.S. and Iran over its unraveling nuclear deal with world powers.

First word of the assault came in online videos of giant fires at the Abqaiq facility, some 20 miles northeast of the Saudi capital, Riyadh. Machine-gun fire could be heard in several clips alongside the day’s first Muslim call to prayers, suggesting security forces tried to bring down the drones just before dawn. In daylight, Saudi state media aired a segment with its local correspondent near a police checkpoint, a thick plume of smoke visible behind him.

The fires began after the sites were “targeted by drones,” the Interior Ministry said in a statement carried by the state-run Saudi Press Agency. It said an investigation was underway.

Saudi Aramco, the state-owned oil giant, did not respond to questions from The Associated Press.

In a short address aired by the Houthi’s Al-Masirah satellite news channel, military spokesman Yahia Sarie said the rebels launched 10 drones after receiving “intelligence” support from those inside the kingdom. He warned that attacks by the rebels would only get worse if the war continues.

“The only option for the Saudi government is to stop attacking us,” Sarie said.

The rebels hold Yemen’s capital, Sanaa, and other territory in the Arab world’s poorest country. Since 2015, a Saudi-led coalition has fought to reinstate the internationally recognized Yemeni government.

President Donald Trump called Saudi Arabia’s Crown Prince Mohammed bin Salman in the wake of the drone strikes and expressed the United States’ readiness to cooperate with the kingdom in supporting its security and stability, according to a news release from the Saudi Embassy in Washington. Trump said recent attacks against Saudi state-run oil facilities have had a negative impact on the U.S. and global economies.

The crown prince assured Trump that Saudi Arabia is “willing and able to confront and deal with this terrorist aggression,” according to the release.

The U.S. Embassy in Riyadh said it was unaware of any injuries to Americans. Saudi Aramco employs a number of U.S. citizens, some of whom live in guarded compounds near the site.

“These attacks against critical infrastructure endanger civilians, are unacceptable, and sooner or later will result in innocent lives being lost,” U.S. Ambassador John Abizaid, a former Army general, said.

Saudi Aramco describes its Abqaiq oil processing facility in Buqyaq as “the largest crude oil stabilization plant in the world.”

The plant has been targeted in the past by militants. Al-Qaida-claimed suicide bombers tried but failed to attack the oil complex in February 2006.

There was no immediate impact on global oil prices as markets were closed for the weekend. Benchmark Brent crude had been trading at just above $60 a barrel.

While Saudi Arabia has taken steps to protect itself and its oil infrastructure, analysts had warned that Abqaiq remained vulnerable. The Rapidan Energy Group, a Washington-based advisory group, warned in May that “a successful attack could lead to a months-long disruption of most Saudi production and nearly all spare production.” It called Abqaiq, close to the eastern Saudi city of Dammam, “the most important oil facility in the world.”

The Washington-based Center for Strategic and International Studies separately issued its own warning just last month.

“Though the Abqaiq facility is large, the stabilization process is concentrated in specific areas, including storage tanks and processing and compressor trains — which greatly increases the likelihood of a strike successfully disrupting or destroying its operations,” the center said.

The war has become the world’s worst humanitarian crisis. The violence has pushed Yemen to the brink of famine and killed more than 90,000 people since 2015, according to the U.S.-based Armed Conflict Location & Event Data Project, or ACLED, which tracks the conflict.

Since the start of the Saudi-led war, Houthi rebels have been using drones in combat. The first appeared to be off-the-shelf, hobby-kit-style drones. Later, versions nearly identical to Iranian models turned up. Iran denies supplying the Houthis with weapons, although the U.N., the West and Gulf Arab nations say Tehran does.