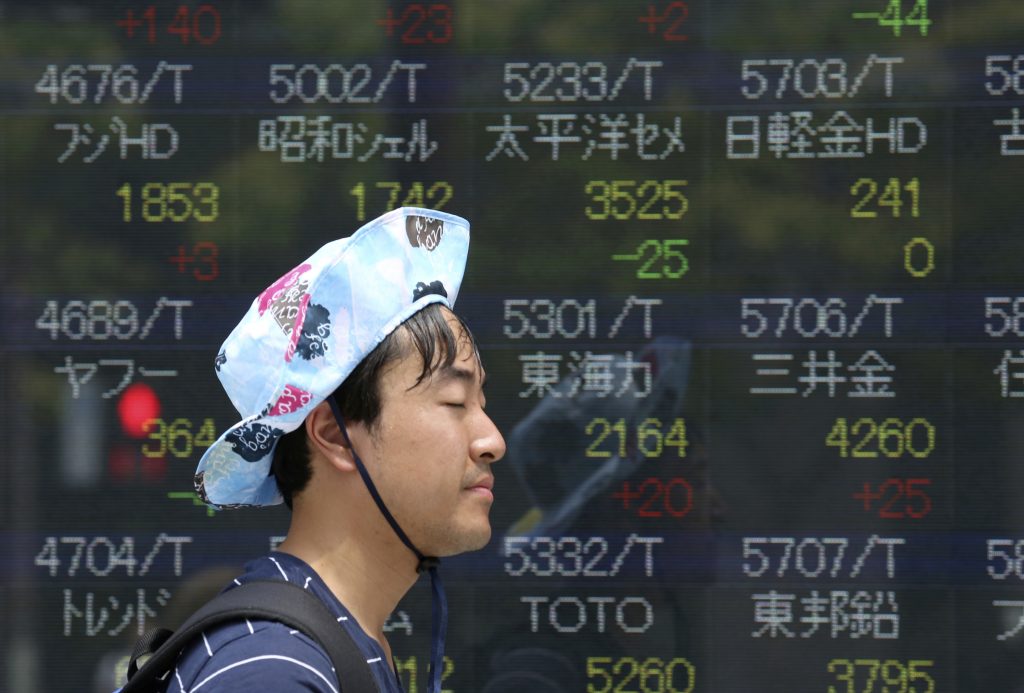 Stocks were broadly higher in Asia on Friday after gains overnight on Wall Street. Investors have stepped up buying on hopes for an easing of tensions in the costly trade war between the U.S.

Stocks rose on Wall Street after the U.S. and China took steps to ease tensions in their costly trade war.

Technology, financial and consumer-focused stocks helped power the modest rally, which extended the market’s solid gains from the day before despite losing some momentum in the final hour of trading. The benchmark S&P 500 index closed within 0.6% of its all-time high set July 26.

The U.S. agreed to delay another round of tariffs on Chinese imports by two weeks to Oct. 15. Meanwhile, Chinese importers have asked U.S. suppliers for prices for soybeans, pork and other farm goods — a sign they might step up purchases of American agricultural products.

The gestures stoked cautious optimism among investors that the next round of trade talks in October between Washington and Beijing may lead to some progress after a string of failed attempts at resolving the longstanding dispute.

“What’s driving markets today is the potential for an interim trade deal,” said Tony Roth, chief investment officer at Wilmington Trust. “There’s enough pain to [China’s] domestic economy and there’s enough pain to our domestic economy that it’s in both presidents’ interests to take a step back and have a little bit of breathing room right now. That’s what’s changed.”

The U.S.-China talks have basically gone nowhere since early May, when the two sides appeared to be nearing a deal. Along the way, the countries have slapped import taxes on hundreds of billions of dollars’ worth of each other’s products.

Financial markets were rattled in August as the trade conflict escalated yet again, fueling worries that more tariffs and a slowing global economy could bump the U.S. into a recession. The economic uncertainty has also become a drag on companies.

The two countries’ conciliatory moves Wednesday and Thursday have raised hopes on Wall Street that the upcoming round of trade negotiations may yield a different outcome than previous attempts.

The reason? The trade war has begun to take its toll economically on both economies.

“Six months ago, even three months ago, you weren’t registering as much economic deterioration as you are now in both economies,” Roth said. “The markets are believing that there’s some credibility in the idea that there may be an interim trade truce, let’s call it, where they roll back some of the tariffs, the Chinese would buy some stuff, and there would be relief to both economies.”

Several weeks of solid gains have helped the S&P 500 more than recoup its losses in August, nudging it closer to another record high close this week.

The index is also on track for its best September since 2013. The S&P 500 is up 2.8% this month after slipping 1.8% in August. That’s notable because the index has fallen in September 55% of the time since World War II, although the record has been better during the 10-year bull market.

Small companies are the star performers so far this month. The Russell 2000 index of smaller-company stocks is up 5.4%, with much of the gain coming this week. Those smaller companies are viewed as more insulated from the impact of volatile swings in the U.S.-China trade war.

Tech stocks notched solid gains Thursday. The sector’s companies, particularly chip makers, are heavily impacted by the trade war because many of them make products in China or rely on Chinese suppliers.

The yield on the 10-year Treasuries rose to 1.78% from 1.73% a day earlier, giving a boost to financial sector stocks. Higher yields drive interest rates on mortgages and other consumer loans higher, which drives up bank profits. SunTrust Banks gained 1.3% and American Express rose 0.9%.

Benchmark crude oil fell 13 cents to $54.96 per barrel in electronic trading on the New York Mercantile Exchange. It lost 66 cents to settle at $55.09 a barrel on Thursday. Brent crude oil, the international standard, dropped 19 cents to $60.19 a barrel. It gave up 66 cents to $60.38 a barrel overnight.