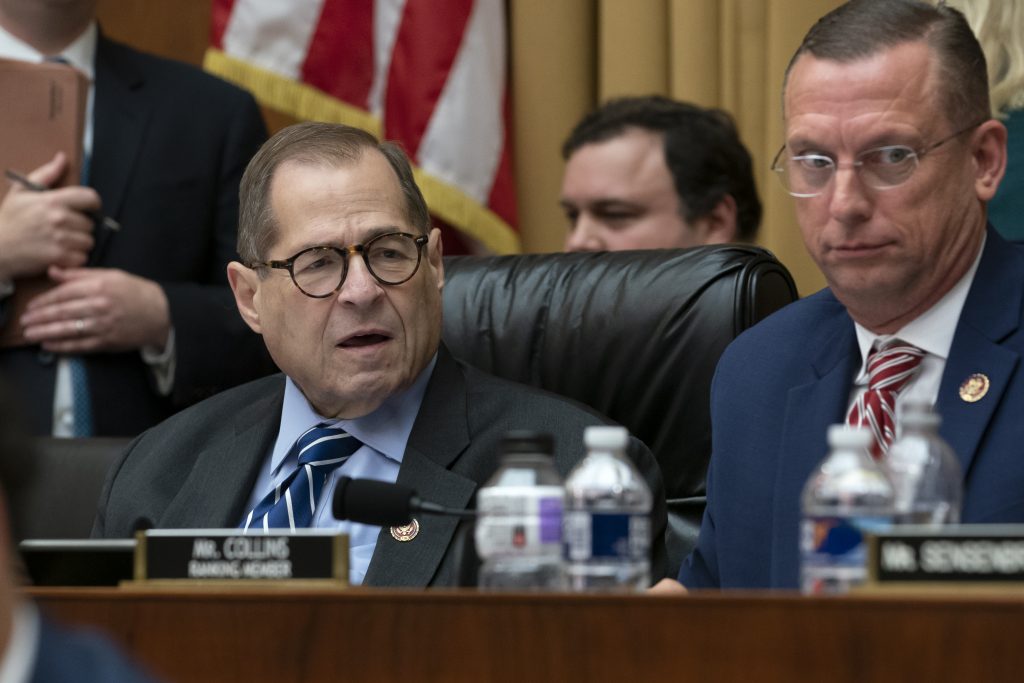 House Judiciary Committee Chairman Jerrold Nadler tried to clear up confusion within his caucus about impeachment on Thursday as the committee approved guidelines for impeachment hearings on President Donald Trump.

Nadler says there’s no uncertainty about what his committee is doing: It’s an impeachment investigation, no matter how you want to phrase it.

Some of Nadler’s fellow Democrats — including House Majority Leader Steny Hoyer — have stumbled over how to explain what they’re doing, and House Speaker Nancy Pelosi has been reluctant to echo the committee’s assertions that they are in the midst of an impeachment probe.

At a news conference after the committee vote, Pelosi was on the defensive. She said she supports what the committee is doing, and “I salute them for that work.” She said, though, that when she travels the country, “people are saying it’s good to be careful about how we proceed.”

Impeachment has divided Democrats who control the House. Democrats on Nadler’s committee, including some of the most liberal members of the House, have been eager to move forward with the process. But moderates, mostly first-term lawmakers who handed their party the majority in the 2018 election, are concerned about the committee’s drumbeat on impeachment and the attention that comes with that continued action.

Given those divisions, Nadler and Pelosi have been talking about impeachment very differently. While Nadler has been clear that his committee is moving ahead, Pelosi is reluctant to mention the “I” word and has repeatedly said the strategy is to “legislate, investigate and litigate.” In private meetings, she has urged caution and told the caucus that the public isn’t there yet on impeachment.

At the same time, she has signed off on the committee’s moves.

Pressed on whether there were mixed messages coming from leadership and the committee, she wouldn’t answer. “I have said what I am going to say on the subject,” Pelosi said.

Nadler, too, declined to answer a similar question. “I’m not going to get into that,” he said after the committee’s vote.

At the hearing, he was forceful about the Judiciary panel’s path.

“Some call this process an impeachment inquiry. Some call it an impeachment investigation. There is no legal difference between these terms, and I no longer care to argue about the nomenclature,” Nadler (D-N.Y.), said earlier as he opened the meeting. “But let me clear up any remaining doubt: The conduct under investigation poses a threat to our democracy. We have an obligation to respond to this threat. And we are doing so.”

The confusion was highlighted Wednesday when Hoyer (D-Md.), indicated to reporters that there was not an impeachment investigation — and then issued a clarification saying he thought the question was “in regards to whether the full House is actively considering articles of impeachment, which we are not at this time.” Like Pelosi, he said he supported the committee’s work.

As the committee said it would move ahead, several freshman lawmakers met with Nadler on Wednesday and expressed concerns about the path ahead.

“It’s sucking the air out of all the good stuff that we’re doing, so that’s our concern,” said Florida Rep. Donna Shalala, who attended the meeting. She said very few constituents in her swing district asked her about impeachment over the August recess.

With lawmakers divided, it’s unclear whether the impeachment process will ever move beyond the committee’s investigation. The committee would have to introduce impeachment articles against Trump and win approval from the House to bring charges. The Republican-led Senate is unlikely to convict Trump and remove him from office.

Still, the committee has persisted in advancing the impeachment issue, partly to bolster two lawsuits against the Trump administration as the White House has repeatedly blocked witness testimony and document production. The suits say the material is needed so the committee can decide whether to recommend articles of impeachment.

The resolution the committee approved along party lines would allow the committee to designate certain hearings as impeachment hearings, empower staff to question witnesses, allow some evidence to remain private and permit the president’s counsel to officially respond to testimony. The committee says the resolution is similar to procedural votes taken at the beginning of the impeachment investigations into Presidents Richard Nixon and Bill Clinton.

“Under these procedures, when we have finished these hearings and considered as much evidence as we are able to gather, we will decide whether to refer articles of impeachment to the House floor,” Nadler said in his opening statement.

The first hearing scheduled under the new impeachment rules is with onetime Trump campaign manager Corey Lewandowski on Sept. 17. Lewandowski was frequently mentioned in special counsel Robert Mueller’s report, which the committee has been investigating. According to Mueller’s report, Trump asked Lewandowski to deliver a message to then-Attorney General Jeff Sessions requesting that he limit Mueller’s inquiry.

In addition to Mueller, the committee is investigating the spending of taxpayer money at the president’s hotels and properties and hush money payments. Nadler said all of those investigations will inform the decision on whether to vote on articles of impeachment.

Republicans expressed their frustration with the entire process before the committee voted on Thursday. They say the committee cannot be in impeachment because the House has never voted to open an official inquiry.

Georgia Rep. Doug Collins, the top Republican on the committee, said the committee “has become a giant Instagram filter … it’s put in there to look like something, but it’s really not.”

Collins said Democrats are trying to have it both ways.

“My colleagues know very well they don’t have the votes to authorize impeachment proceedings on the House floor, but they want to impeach the president anyway,” Collins said. “So, they are pretending to initiate impeachment.”