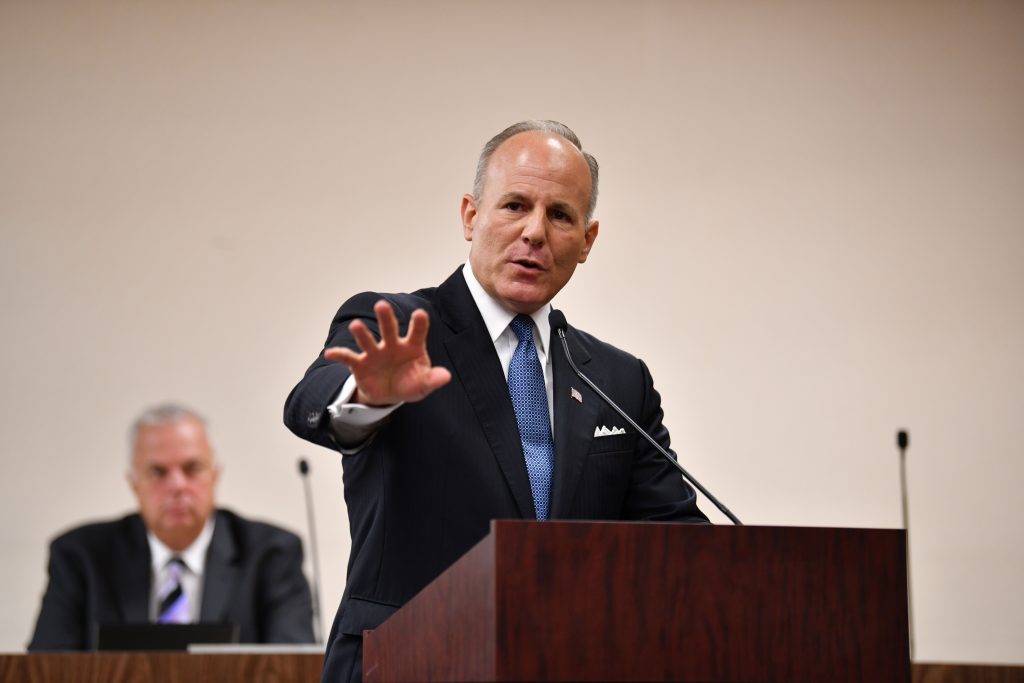 Elan Carr, the State Department’s Envoy for Combatting Anti-Semitism, called on Ocean County officials to condemn hateful speech against Jews, at an event held in Lakewood.

While his remarks at the event, billed as a “Regional Discussion on Combatting Hate,” were wide ranging, his call for leaders to look beyond local politics and act to prevent bias from going unchecked were among his strongest.

“If a person expresses himself in a certain way and there’s a tsunami of disgust, he’s going to think twice before he does it again, and that’s just not happening around here,” he said. “Even if there’s an election coming up we have to be unequivocal and say there’s no place for something like this in the United States of America.”

Lakewood is an expected stop for any official tasked with fighting anti-Semitism. In recent years, a significant number of Orthodox families have purchased homes in the surrounding townships of Jackson and Toms River.

This development has met with significant pushback. In Jackson, the town’s government passed ordinances that banned eruvin and the construction of new schools. Anti-Semitic rhetoric has become a regular feature of on-line forums such as Jackson Strong, Toms River Strong, and Rise up Ocean County (RUOC) whose virulent rhetoric often borders on incitement.

Mr. Carr’s words seemed pointed specifically at the response of some local officials to RUOC. After the group gained wider media attention with the release of a video clip that used Holocaust imagery to encourage county residents to take action to stop the Orthodox community’s growth, an effort was made by some local activists for townships to adopt a measure condemning RUOC. Such a resolution was passed by Ocean County’s government as well as by Lakewood, but was not taken up by either Jackson or Toms River, who instead made vague statements decrying bigotry without naming RUOC.

Mr. Carr warned of dire consequences that could come from a failure to call out vitriolic speech.

“If somebody can express themselves that way and no one says anything, and then candidates run for office and placate it and feed it and say ‘I’m going to try to get votes this way,’ it normalizes it and its going to happen more and more, and then the hate is going to turn to vandalism, and vandalism will turn to a street assault, and the street assault will turn to Pittsburg and Poway, G-d forbid. And then when Pittsburgh and Poway happen…everyone will say ‘how can this happen?’ Well, this is how it happens,” he said.

While the Special Envoy position at the State Department tasks Mr. Carr with tracking anti-Semitism and engaging in diplomacy to fight it overseas, he mentioned at the event that since his appointment in February, the Trump administration has instructed him to work together with other agencies to help confront rising domestic threats facing Jews as well.

Saying that the very creation of his post speaks to America’s historic admiration and commitment to the Jewish People, Mr. Carr said that the government’s interest in maintaining the envoy’s office goes beyond its stated task.

“This is not just about Jews, this is about the future of our country… [Anti-Semitism] is the greatest barometer of human suffering…every society that has drank this poison has rotted to the core,” he said.

In response to a question from Hamodia, Mr. Carr said that rising anti-Semitism in America had not undercut the ability of his office to discuss threats facing Jews in other countries with foreign governments.

“I’m very candid about acknowledging our imperfections here, I readily acknowledge what our problems are and that gives me credibility,” he said. “What’s happening here in America is really the same thing as in the rest of the world…we are seeing hatred from three disparate sources: the extremist far right which has a hatred for anybody who is not like them, certainly Jews most of all; the Israel hating radical left, and from militant Islam.”

Both at the event and in greater depth on a conference call held with local media later that afternoon, the Special Envoy differentiated between broader trends of anti-Semitism and animus in Ocean County stemming from “community change.”

“This isn’t the first time we’ve seen this in America, but it has to be dealt with in an open and honest way, but if it comes out as ethnic hatred which it clearly has around Lakewood, that’s something that has to be called out,” he said.

The event, held in Lakewood’s municipal building, was hosted by the Lakewood Neighbors, a coalition of civic leaders and other stakeholders from around Ocean County which aims to reduce tensions between communities by encouraging bridge building, and by publicizing stories they hope will engender greater harmony between Jews and non-Jews in the area.

Rabbi Aaron Kotler, President of Beth Medrash Gevoha, addressed the event on behalf of the coalition which he co-founded. He emphasized the effects of rising anti-Semitism by recalling his first meeting with Mr. Carr in Antwerp under the protection of armed guards and bemoaned the increasing tensions locally, but expressed hope that efforts such as Lakewood Neighbors could play a role in fighting the trend.

“It’s tragic that such a level of hatred has metastasized here in Ocean County [but it’s] a wonderful thing that there are those in civil society that want to do better,” he said.