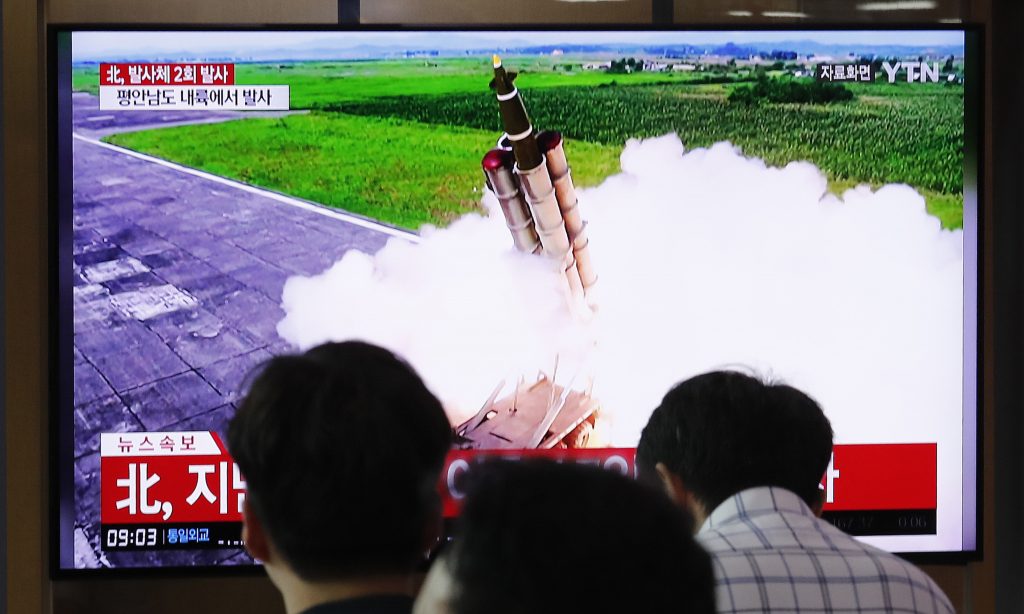 North Korea fired a new round of short-range projectiles on Tuesday, South Korean officials said, only hours after it signaled a new willingness to resume stalled denuclearization talks with the United States.

The launches were detected early in the morning by the South Korean military, which said they appeared to be short-range projectiles.

The launches came hours after Vice Foreign Minister Choe Son Hui said in a statement carried by state media that North Korea was willing to have “comprehensive discussions” with the United States in late September at a time and place to be agreed.

Choe warned that the United States needed to present a new approach or the talks could fall apart again. A U.S. State Department spokeswoman said she did not have any talks to announce at that time.

Shares of South Korean construction firms with exposure to North Korea surged after the announcement that North Korea was willing to restart talks with the United States and continued to gain despite the latest launches.

U.S. President Donald Trump and North Korean leader Kim Jong Un met at the demilitarized zone (DMZ) between the two Koreas in June and agreed to restart working-level negotiations that had been stalled since an unsuccessful second summit between the two leaders in Vietnam in February.

Since the DMZ meeting, however, American officials said their attempts to resume talks had gone unanswered. North Korea has also conducted at least eight test launches since then, usually with multiple missiles each time.

“All of these acts by North Korea that escalate tensions do not help efforts to ease tension on the Korean Peninsula, and we reiterate our calls for an immediate halt,” South Korea‘s Joint Chiefs of Staff said in a statement.

Biegun has led working-level talks with North Korea. He discussed with Lee how to make substantive progress on denuclearization and peace, according to the ministry, which did not mention Choe’s comments or the latest launches.

While analysts said North Korea conducts missile tests for a range of purposes, including technical development and reassurance for the defense establishment, Tuesday’s launches appeared to have been timed to send a message to Washington.

The launches were probably the latest case of Kim turning to missile tests as diplomatic signalling, said Daniel DePetris, a fellow at Defense Priorities, a Washington-based think-tank.

“Far be it from me to get inside Kim’s head, but the simplest answer may be the most accurate: North Korea is demonstrating what will happen if the U.S. doesn’t come to the table with realistic proposals,” he said.

Trump has played down previous tests this year, saying he did not believe short-range missiles violated any agreements.

Other officials, including Trump’s national security adviser John Bolton, have said even short-range launches by North Korea are banned under U.N. resolutions.

North Korea declared last year a self-imposed moratorium on tests of nuclear weapons as well as launches of its long-range intermediate and intercontinental ballistic missiles.

“Going by what they’ve said so far, they’re not too concerned about effects on talks with the U.S.,” said Joshua Pollack, a North Korea expert at the Middlebury Institute of International Studies in California.

“Trump has given them a pass on short-range missiles,” he said. “Instead, they have indicated their displeasure with Seoul.”

North Korea has said its development of new weapons aims to counter military threats and offensive pressures against its security, including joint military exercises by the United States and South Korea and the arrival of new stealth fighter aircraft in the South.

While the missiles unveiled this year have been short-range, analysts warn they have shown significant technological advances and could be used to evade missile defenses.