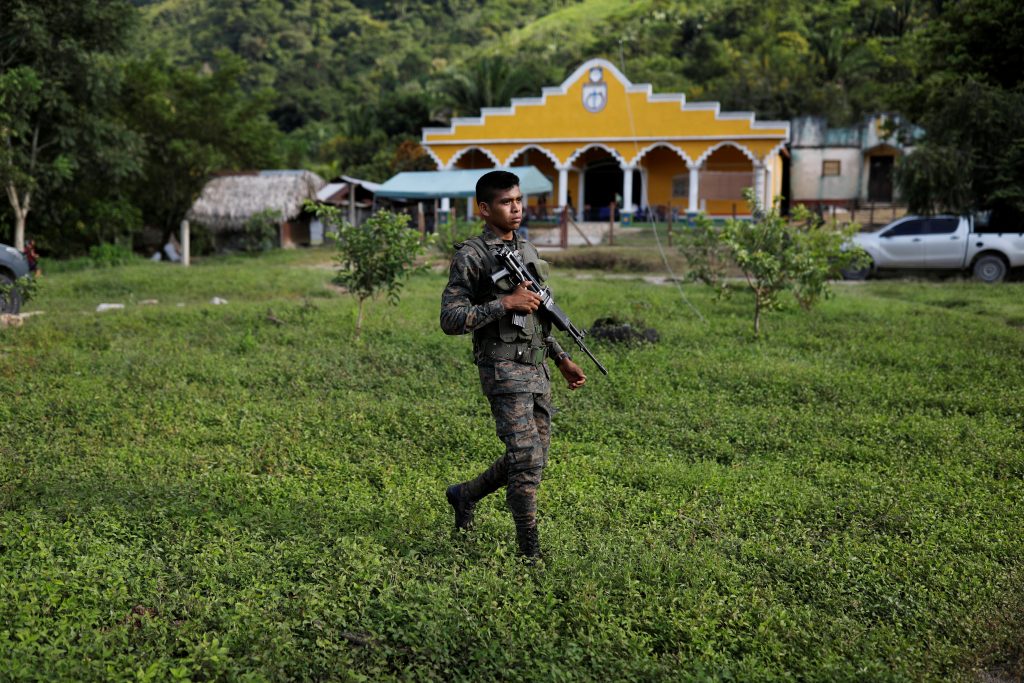 Hundreds of Guatemalan soldiers were deployed on Monday to an area near the border with Honduras and Mexico, home to long-standing social conflicts, in a bid to improve security after three soldiers were gunned down by suspected contraband traffickers.

Defense Minister Luis Miguel Ralda told reporters that 2,000 soldiers had been sent as part of the mission following a declaration of emergency powers granted by the Congress two days ago.

“We expect them to bring calm, security and peace to the people of this region,” he said, acknowledging that the area was marked by lawlessness due to extortion and other mob-related crime.

The area has played host over decades to a range of conflicts among locals and land owners, miners and palm oil plantations, including indigenous communities.

Guatemala’s army said last week a group of suspected traffickers ambushed a patrol of nine soldiers in Izabal province who were sent to detain an aircraft allegedly transporting contraband. Three of the soldiers were killed.

While some community members dispute parts of the army’s account, officials say they identified nearly 50 illegal runways that they say are used to transport contraband.

The attack on the soldiers, one of the worst incidents of violence perpetrated against the army in years, prompted lawmakers to authorize a 30-day emergency decree on Saturday that imposes a night-time curfew in the northeastern provinces of Alta Verapaz, El Progreso, Izabal, Peten, Zacapa and Baja Verapaz.

The six provinces make up a trafficking corridor that runs from Honduras to the Mexican border. The decree also gives the military new powers to arrest and interrogate suspects and prohibits organized protests in the targeted areas.

Soldiers could be seen in the lush Izabal countryside on Monday stopping and inspecting passing vehicles and setting up new bases.

A school in the town of Semuy II, where the soldiers were attacked, was empty on Monday because classes have been suspended indefinitely.

Guatemala, like neighbors El Salvador and Honduras, is a hub for the trafficking of contraband from South America to the United States.