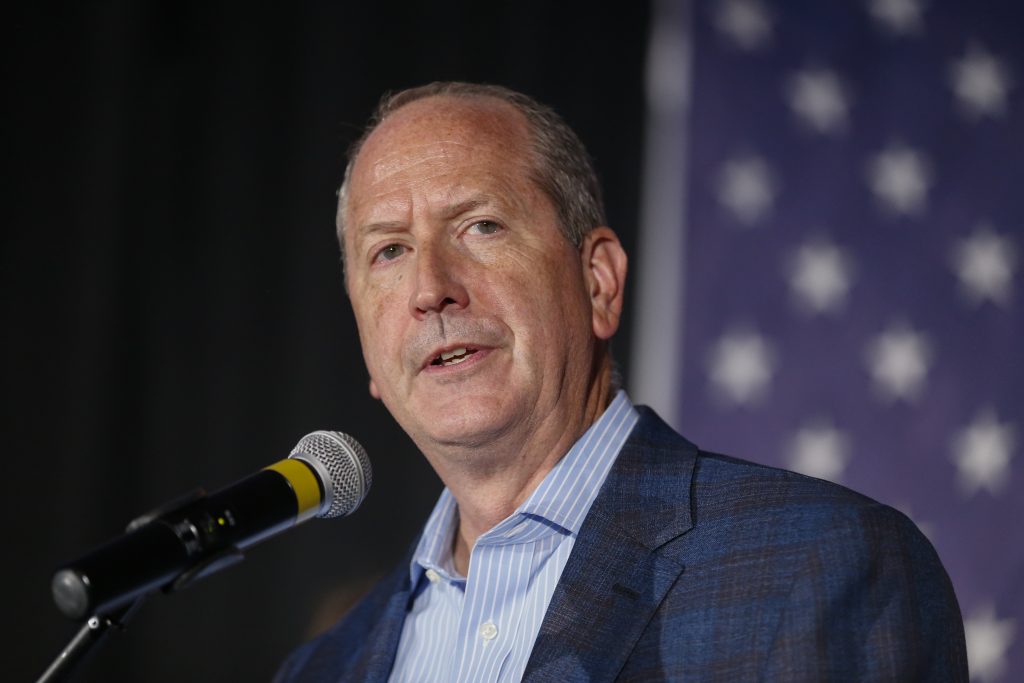 Republican Dan Bishop pulled out a narrow win in North Carolina’s 9th Congressional District on Tuesday, giving the GOP a victory in a district that President Donald Trump won easily in 2016 but which proved to be a fierce battleground.

With 95 percent of precincts reporting, Bishop was leading with 50.6 percent to Democrat Dan McCready’s 48.8 percent.

Bishop’s victory came one day after Trump and Vice President Mike Pence campaigned in the district to help boost the state lawmaker in the surprisingly competitive race in a district Trump won by 12 percentage points in 2016.

The outcome in the 9th District was the culmination of a political saga that stretched over more than two years – exploding into allegations of ballot fraud that prompted state and federal investigations and the nullification of November’s general election.

“Congratulations to Dan Bishop on his definitive victory tonight in North Carolina’s 9th Congressional District,” the National Republican Congressional Committee said in a statement. “North Carolinians rejected the Democrats’ socialist agenda and elected a representative who will defend North Carolina values, and will always fight for freedom and against socialism.”

The stakes for the special election were substantial – for one, measuring whether Trump had been able to recover any support in affluent suburbs such as the leafy districts south and east of downtown Charlotte, where McCready found surprisingly strong support.

Bishop, 55, is a Trump loyalist. McCready, meanwhile, is a 36-year-old former Marine Corps officer and solar-energy investor who had been running for more than two years on a centrist platform.

For Democrats, Bishop’s win is likely to send signals that 2018’s “blue wave” could be ebbing in a presidential cycle, with Trump driving higher turnout among Republicans, offsetting the suburban erosion. It may also spark a round of second-guessing about national party strategy after Democratic groups spent millions of dollars in the final week to get McCready over the finish line.

Bishop got a late personal boost from the president, who held a campaign rally in Fayetteville on Monday to get out the vote. The president told the crowd, “To stop the far left, you must vote in tomorrow’s special election.”

In Monroe, North Carolina, voter Carolyn Slover, 27, said Tuesday that Trump’s visit “made me want to vote for Dan Bishop. It shows who he’s for and how they are a partnership.”

In a sign of the toss-up nature of the race, leaders of both parties in Washington sought to play down the implications of the outcome before polls closed Tuesday.

House Minority Leader Kevin McCarthy, R-Calif., who flew to the district Monday with Trump, suggested that the outcome of the race wouldn’t necessarily offer clues about 2020. “I can sit back, and I can tell you about all the special elections we lost in 2009 and that we won 63 seats” in the 2010 midterms, he said. “Special elections are just what they are: They’re special.”

House Minority Whip Steve Scalise, R-La., called the district “a very tough swing district,” even though Trump won it by double digits and Republicans have had a lock on the seat for decades.

Rep. Cheri Bustos, D-Ill., chairwoman of the Democratic Congressional Campaign Committee, which poured millions of dollars into the race, also declined to discuss what a McCready win would mean. “It’s neck and neck,” she said. “But I can tell you we left everything, and I do mean everything, on the field.”

Several voters in Cumberland County who backed Bishop said Tuesday morning that Trump didn’t influence their choice, but rather that the Democratic Party did.

“It wasn’t so much about voting for him as it was voting against the Democrats,” said Tom Driggers, 76. “I simply don’t believe in most of their policies. I’m like George Bush; I’m a conservative with common sense.”

Wayne Canady, 71, said he didn’t share any values with Democrats.

“You name an issue and I’m against their stance. All the troubles in the world stem from communism or socialism. Look at the Democrats’ policies,” Canady said.

“I don’t necessarily vote for a party. I vote for an individual,” he said. “At the end of the day, I don’t agree with all that candidates represent, but I try to choose the best candidate to serve my community.”

The 9th District stretches from the affluent Charlotte suburbs east to poor rural counties and north to the military stronghold of Fayetteville. The race revolved largely around support for Trump and, to a lesser degree, was influenced by the fallout from the fraud scandal.

The state elections board found evidence that Leslie McCrae Dowless – a contractor for Mark Harris, McCready’s initial Republican opponent – illegally collected and in some cases filled out absentee ballots for voters in rural Bladen County, many of them elderly and African American. The board ordered a new election in January, and Harris, who had led in unofficial returns by 905 votes, opted not to run again.

“I’m dressed in blue today and voted for Dan McCready because he was robbed last time,” said Jill Salas, 51, a voter in Monroe.

Spending on the race approached $20 million, making it one of the most expensive special elections in U.S. history. McCready’s campaign spent nearly $5 million, while Bishop’s spending approached $2 million. Outside Republican-aligned groups added $6.8 million, while Democratic groups spent about $3.5 million, according to federal records compiled by the Center for Responsive Politics.

Much of that spending was funneled into TV attack ads. Republicans targeted McCready’s business record, suggesting that he prospered at taxpayers’ expense by lobbying state officials for tax breaks. Democrats, meanwhile, accused Bishop of doing the bidding of health insurance companies and the pharmaceutical industry.