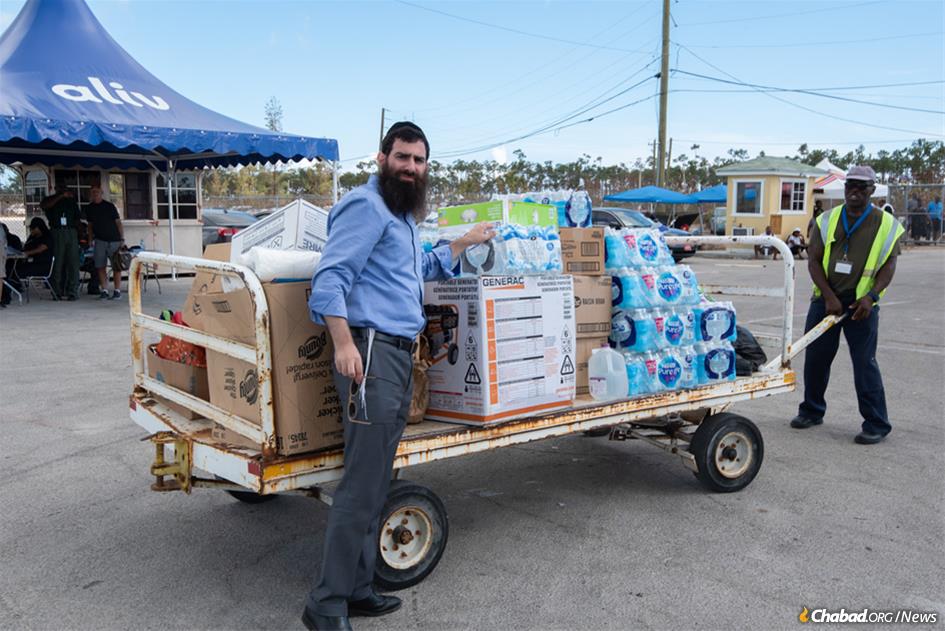 The need is tremendous on Grand Bahama Island. In addition to potable water, food, personal-hygiene supplies, shelter and clothing, local residents crave the knowledge that someone cares.

That is the lesson that Rabbi Sholom Bluming, co-director of Chabad of the Bahamas with his wife, Sheera, is taking away as he shares supplies and support in Freeport, meeting with people and overseeing Chabad’s relief efforts on the ground. Bluming flew into the island, which was decimated by Hurricane Dorian more than a week ago. Tens of thousands of people are homeless and hundreds are feared dead, though the official death count stands at 45, according to local authorities.

Since the storm, Chabad has sent five containers full of supplies by airplane and boat to those in the impacted areas. Among the supplies in the most recent shipments were 46,000 meals; 46,800 water bottles; 3,900 rolls of toilet paper; 22,700 bars of soap; 2,000 tubes of toothpaste; 3,440 toothbrushes; and thousands of baby diapers, granola bars and many more items.

The rabbi recruited a team of local young adults and teens, who are staffing 17 distribution points, where people receive necessities donated by Jewish communities and individuals.

He and his team also walk down dirt roads, often climbing over debris, to reach people, notably the elderly, who are unable to make it to the distribution centers. “I met an elderly woman sitting on a stoop in front of a dilapidated and broken home,” he recalled. “Upon seeing the case of water and food items we had for her, she told me, ‘I haven’t had a drop of water in 24 hours!’ ”

“I saw tremendous destruction. I was talking to people who lost everything in their life, yet they had a sense of resilience. They promised not to give up,” Bluming told Chabad.org. “Besides for giving food and aid, my focus right now is to bring strength and comfort — to give a toy to a little boy so he has something to play with while he sits in the shelter all day. To give a hug to a man who, when I tried to move away, wouldn’t let me go for several minutes. He needed that hug, he needed love, he needed to feel that people care for him.”

The rabbi recounted the moment when he gave a little girl a teddy bear. She held it tight and started to cry, saying, “Mom, this reminds me of the doll I left on my bed before our house fell down!”

Bluming handed out cards written by children from a Jewish school in Baltimore, toys and other items, which Chabad purchased with generous donations from people all over the world.

“My message to them was that the Jewish world cares, and that people around the world are with them. I told them that we are here now and in the long term,” he said. “The Jewish people are ingrained with the message of kindness, chesed and generosity, and they certainly have showed it in the aftermath of this storm and devastation.”