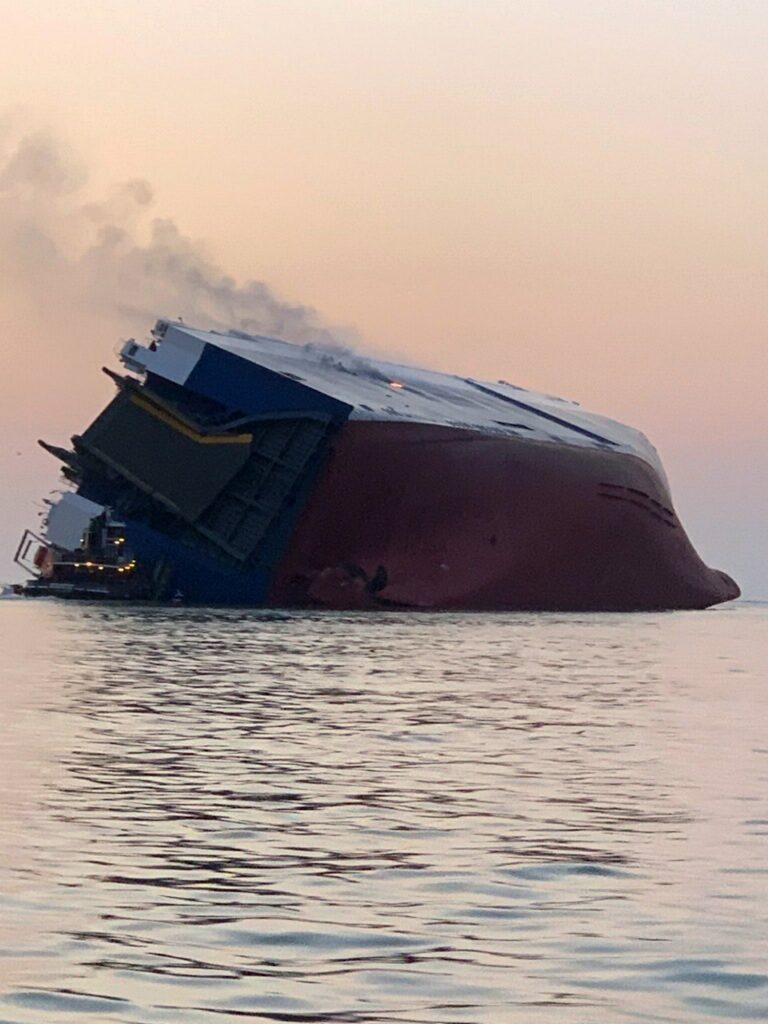 A rescue team has heard noises from inside a cargo ship where four crew members are missing after their huge vessel overturned and caught fire, but the flames and smoke have so far prevented the rescuers from safely penetrating the unstable vessel, the U.S. Coast Guard said Monday.

A Coast Guard helicopter was able to land on the side of the ship Monday as part of the rescue effort.

The Golden Ray listed heavily and then rolled over on its side early Sunday in St. Simons Sound as it left the Port of Brunswick with a pilot and 23 crew members, bound for Baltimore with a load of cars.

Coast Guard Capt. John Reed said 20 were safely evacuated from the ship before rescuers determined the smoke and flames and unstable cargo made it too risky to venture further inside. The 656-foot vehicle carrier is now stuck in the shipping channel, its hull exposed and its deck empty, in view of beachgoers on the shoreline.

Dickinson sought Monday to clarify comments Coast Guard Station Brunwick Commander Justin Irwin made to The Brunswick News on Sunday. Irwin said they heard tapping from locations coming from inside the vessel, and that Coast Guard members were tapping back on the Golden Ray’s hull to let them know they are not forgotten.

“We don’t know if it is all four of them, but there has to be something in there tapping back at us,” Irwin said then. “We are going to go at it tomorrow and try to find them.”

Dickinson said the Brunswick commander “has a positive mindset, which is something we all have.”

Rescued crew members have been helping the Coast Guard focus the search for their four missing mates, he added.

“It is our understanding that they are inside the vessel. We’ve had crews talking with the crew of the Golden Ray, trying to hone on in the best place to search,” Dickinson said.

Reed told a news conference Sunday afternoon that the Coast Guard was trying to determine if it’s safe to get inside.

“Once salvage professionals have determined the vessel to be stable, we will identify the best option to continue our rescue efforts for the four crew members who remain onboard,” Reed said.

The Coast Guard said it was notified of the capsized vessel by a 911 call at about 2 a.m. Sunday.

The cause remains under investigation. Dickinson said it isn’t clear if weather conditions caused the ship to lurch. Hurricane Dorian was already well beyond the Georgia coast, where it blew past last week before being downgraded to a post-tropical cyclone.

The Coast Guard said the overturned ship hasn’t released any pollutants so far, but mitigation responses are ready in case they’re needed.

The Golden Ray is flagged out of the Marshall Islands and was headed to Baltimore, according to the website vesselfinder.com. The ship’s registered owner is Hyundai Glovis, a South Korean company.

The Port of Brunswick, one of the busiest U.S. seaports for shipping automobiles, is currently closed to vessel traffic, with an established emergency safety zone in St. Simons Sound. Vessels are not authorized within a half mile of the Golden Ray. Nearly 614,000 vehicles and heavy machinery units moved across its docks in the 2019 fiscal year that ended June 30, according to the Georgia Ports Authority.