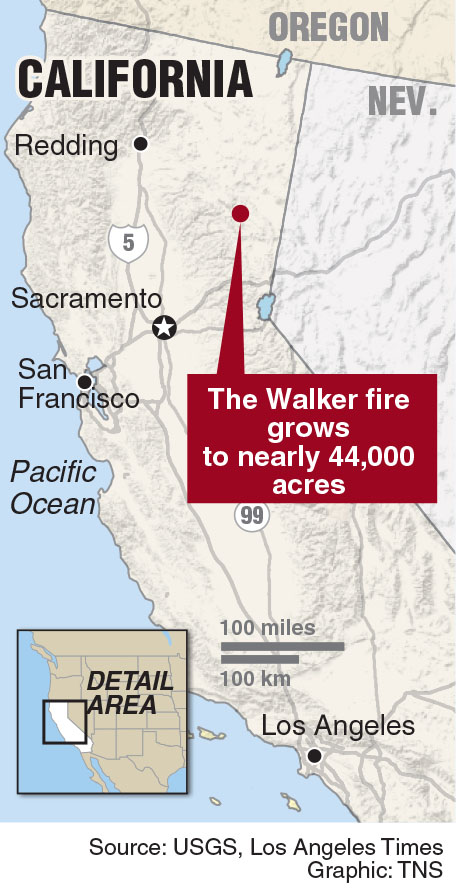 Road closures and mandatory evacuation orders remain in place for a number of nearby communities as the wildfire, which broke out about 11 miles east of Taylorsville, is now mapped at 43,931 acres with 7% containment, the Forest Service said in an update just before 7 a.m. Monday.

Fast growth continues on the blaze as the Forest Service observes “critical fire weather,” which led the fire to explode from 2,000 acres on Friday morning to 17,000 acres that evening. A total of 825 fire personnel remain assigned to the wildfire. Better mapping increased the size of the wildfire to 43,931 acres, up from a previous estimate of just over 38,000 acres.

Mandatory evacuation zones include the Genesee Valley road corridor, the Ward Creek area, the Flournoy Bridge area, the communities of Milford and Brockman Canyon, along Highway 395 from Thunder Mountain Road to the Laufman Grade and the area from Antelope Lake to the Plumas county line, according to the Forest Service.

An evacuation center has been set up at Lassen County Fairgrounds in Susanville.

The U.S. Forest Service says fire activity finally started to decrease on Sunday night and a containment line that has been constructed has held so far.

The Walker Fire ignited on Wednesday. Its cause remains under investigation.