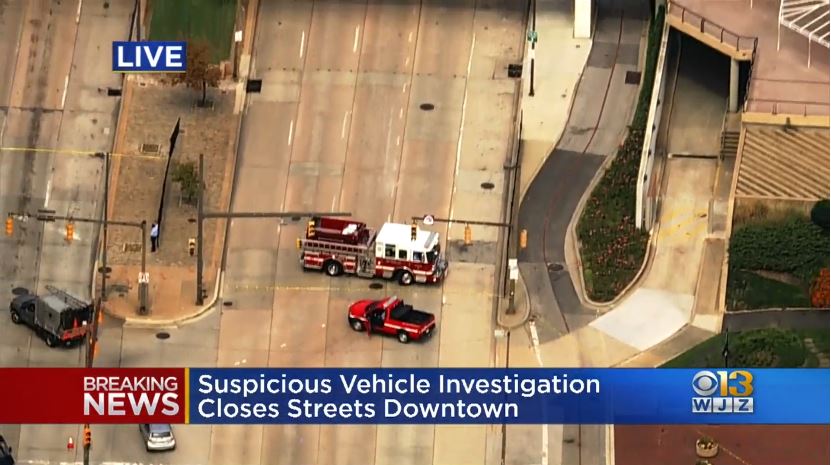 A suspicious vehicle that prompted calls to the bomb squad and shut down much of downtown Baltimore on Monday turned out to contain only stolen diesel fuel, police said.

Baltimore police Col. Richard Worley told reporters that the 15-passenger van had been rigged to steal diesel, which was stored in two large containers.

Police responded to a call about the van parked on the second floor of a garage late Monday morning.

Worley said that after the ensuing evacuations and road closures, “we then went in and examined the vehicle with our robot and found that the devices that we thought could have possibly been hazardous are just used to basically steal diesel fuel.”

Worley declined to name the vehicle’s owner but said the owner had no intent to put others in danger.

Baltimore Mayor Bernard “Jack” Young said in a statement on Monday afternoon that police had investigated the vehicle for several hours. People whose vehicles were stuck downtown were encouraged to find another way home.

Young’s office said the episode began about 10:40 a.m. when the city’s fire department received a call about a suspicious vehicle parked at a building. The statement said local and federal law enforcement officials were on the scene and that all buildings in the surrounding area were evacuated.

One of the evacuated buildings is the headquarters of T. Rowe Price and houses the firm PricewaterhouseCoopers. Stephen Luck, a security specialist at T. Rowe Price, told The Baltimore Sun that the building’s fire alarm activated shortly after 11 a.m.

He said the company later told employees that a suspicious vehicle was being investigated in the garage.

People in some of the surrounding buildings were asked to shelter in place. No one was reported hurt.

Carrie Meyers, 28, a downtown Baltimore resident and veterinary technician, said she had never before seen authorities block off the streets next to her apartment building. She said she wasn’t ordered to evacuate, but was still concerned about the situation.

“I got an alert on my phone and then I looked out the window and saw a firetruck,” she said while walking her dog with a firetruck in the backdrop and sirens blaring. “I wasn’t sure if I needed to leave the building.”

Christian Law, 33, had planned to walk his Yorkie after work but was interrupted by the evacuation. He worried about how long he would have to wait to get to his condo.

“I came home from work and found the yellow tape,” Law said referring to the police tape being used to mark the evacuation area. “(The police officer) told me we couldn’t get to the building.”