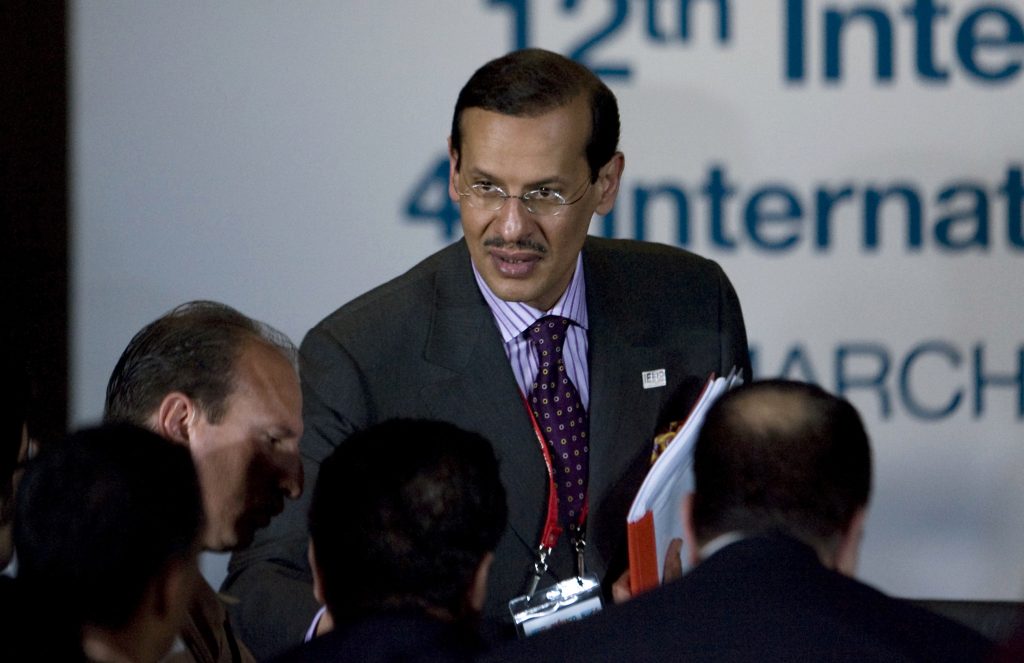 Saudi Arabia’s King Salman replaced the country’s energy minister with one of his own sons Sunday, naming Prince Abdulaziz bin Salman to one of the most important positions in the country as oil prices remain stubbornly below what is needed to keep up with government spending.

The new energy minister is an older half-brother to 34-year-old Crown Prince Mohammed bin Salman and replaces Khalid al-Falih, who’d been in the role since 2016.

Prince Abdulaziz is an experienced oil industry figure in Saudi Arabia. He has been minister of state for energy affairs since 2017, but is not known to be close to Prince Mohammed, the king’s most powerful son and heir to the throne.

His appointment marks the first time a Saudi prince from the ruling Al Saud heads the important Energy Ministry.

The move comes as Brent crude oil trades under $60 a barrel, well below the $80-$85 range that analysts say is needed to balance the Saudi budget.

Al-Falih’s top role in the country’s vital energy sector had been curtailed in recent days, signaling a possible rift with the crown prince over his management of various issues, including the kingdom’s plan to sell shares in the state-owned oil company Aramco.

Al-Falih was removed just days ago from his post as board chairman of Aramco, a company that he once ran as CEO. Al-Falih had also seen his Cabinet portfolio diminished recently when mining and industry were removed from his purview and spun off into a new ministry.

Al-Falih’s diminishing role had led to reports that he was out of favor with Prince Mohammed, who is pushing to diversify the Saudi economy away from its dependence on oil revenue for survival.

Aramco’s new board chairman is the finance-minded Yasir al-Rumayyan, who heads the Public Investment Fund, the country’s sovereign wealth fund. Al-Rumayyan is also a close adviser to the crown prince.

Higher oil prices not only help Saudi Arabia balance its budget, but also directly affect Aramco’s overall valuation as it heads toward a potential listing.

Al-Falih, who had taken over the energy portfolio from longtime oil minister Ali al-Naimi, was tasked with playing a key role in Prince Mohammed’s economic overhaul of the country. He expressed concern in January at an energy forum in Abu Dhabi over the “range of volatility” in oil prices seen over the past two to three years.

Still, Saudi Arabia’s diversification efforts have struggled to take off as government spending reaches an all-time high of $295 billion this year.

The kingdom’s new energy minister, Prince Abdulaziz, has a lifetime of experience in Saudi Arabia’s oil sector. In his 20s he became an adviser to the Energy Ministry in 1985 before being named deputy oil minister in 1995, a position he held for nearly a decade. He then served as assistant oil minister until 2017, when he was named minister of state for energy affairs. He holds degrees from King Fahd University of Petroleum and Minerals.

Also on Sunday, the king issued a royal decree removing the current deputy minister of energy, Abdulaziz al-Abdulkarim. He did not name a new deputy energy minister.

The king did, however, name Osama bin Abdulaziz Al-Zamil as deputy minister for the new Ministry of Mining and Industry. The decrees, issued early Sunday, were published by the state-run Saudi Press Agency.