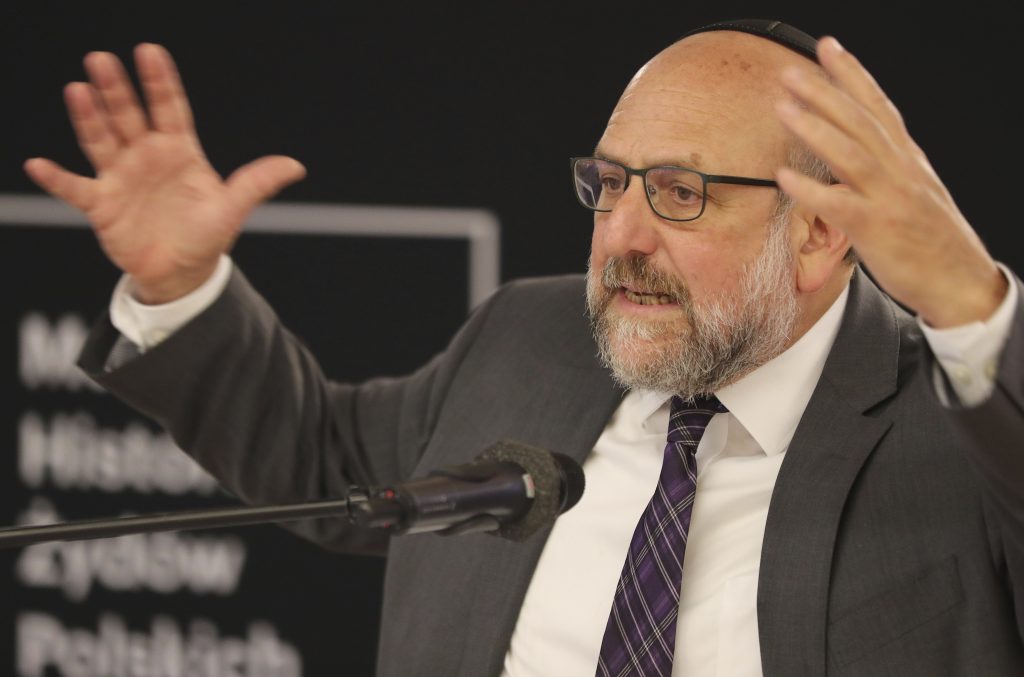 A U.S.-based Jewish foundation honored Polish gentiles who rescued Jews during the Holocaust, a number of which that grows smaller each year, with U.S. and Israeli diplomats also paying their respects at the event Sunday in Warsaw to the elderly Poles who put their lives in danger to save others.

Those still living today, 80 years after the start of World War II, were children or young adults during the war, and in most cases helped their parents in the dangerous job of hiding and feeding Jews. During the German occupation, those caught aiding Jews were punished with the execution of entire families.

Today, the rescuers are in their 80s and 90s, and they arrived at the event in Warsaw helped by their children, with some in wheelchairs.

“On behalf of the Jewish people, I thank you for your noble deeds so many years ago, for when most turned their backs on their Jewish neighbors, you did not,” Stanlee Stahl, the foundation’s executive vice president, told those gathered. “You will always be remembered in our prayers, for you didn’t just save the Jewish person 75 years ago, you made it possible for generations to be born.”

Giving one example, she singled out two brothers in attendance, Andrzej and Leszek Mikolajkow, who with their parents saved a Jewish mother, father and two sons. One of those sons ended up moving to Israel and having 12 sons of his own, and the family today numbers 300.

“You made it possible for hundreds if not thousands of people to be alive today,” Stahl said. “You have helped repair the world.”

All of the rescuers have been recognized as Righteous Among the Nations by Yad Vashem, Israel’s Holocaust museum and memorial.

According to Yad Vashem’s website, 27,362 people have been recognized to date as “Righteous Among the Nations,” even though there are certainly many more who helped Jews who haven’t been recognized because they were killed or there were no survivors to alert Yad Vashem to their actions. The country with the largest number of acknowledged rescuers, with far over 6,000, is Poland, which was home to Europe’s largest Jewish community before World War II.

The Jewish Foundation for the Righteous pays monthly stipends to elderly rescuers in Eastern Europe, many of whom live on pensions of only a few hundred dollars a month in Poland and far less in Ukraine and elsewhere. Last December 25th, each rescuer got an additional $1,500, a gesture that goes far beyond just symbolic help, and the group has also helped them with medicines and hearing aids.

Warsaw is the only place in Europe where there are enough of them in one place to bring together. On Sunday, there were about 30 in attendance.

Anna Bando, who heads an organization of Polish rescuers, thanked the Jewish group for remembering them so many years later, at a time when she says, “We are leaving this world” and so many people no longer remember the war. Another rescuer wept at the beginning of the ceremony from the sorrow she felt of so many people of her generation being gone, including the Jewish family she helped save and remained close to for many years. The last member of that group passed away not long ago at age 101.

Due to sanctions on Russian-annexed Crimea, the organization can no longer send money, however, to a small group of rescuers there, a situation that Stahl described as distressing in a recent interview with The Associated Press.

Before the Russian annexation of Crimea in 2014, the group was helping five people there.

At one point, she received a letter from a Jewish woman in Israel who was rescued by a woman in Crimea, begging her to send money. But with U.S. sanctions in place, it is illegal to do so.

During the Warsaw event, Poland’s Chief Rabbi Michael Schudrich asked G-d to bless them, and described them as a “model for the kind of people that G-d wants us to be.”

Israeli ambassador-designate, Alexandre Ben-Zvi, paid his respects, while the U.S. deputy chief of mission, Bix Aliu, who is of Albanian heritage, paid tribute to their extraordinary courage. In personal remarks, Aliu described meeting an elderly rescuer in Albania, a Muslim majority country that was the only country in Europe where the number of Jews was larger at the end of the war than before, due to a nationwide effort to save Jews.