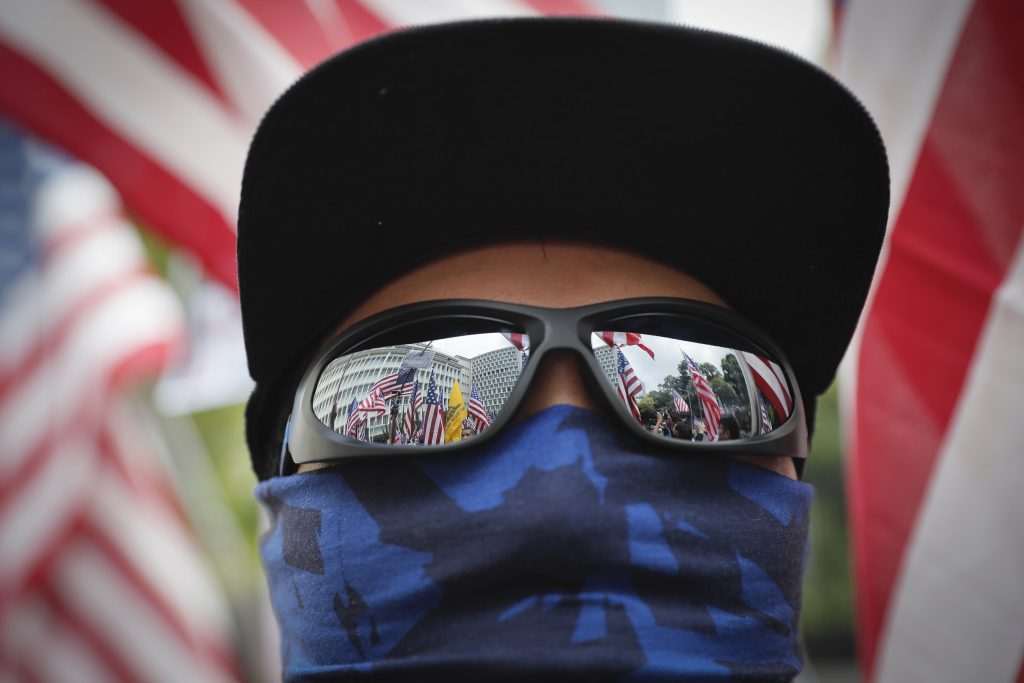 Thousands of demonstrators in Hong Kong marched to the U.S. Consulate on Sunday, urging President Donald Trump to “liberate” their city as they press for more democratic freedom in the semi-autonomous Chinese territory.

Many of them, clad in black shirts and wearing masks, waved American flags and carried posters that read “President Trump, please liberate Hong Kong.” Riot police stood watch during the march to the nearby U.S. Consulate.

“Hong Kong is at the forefront of the battle against the totalitarian regime of China,” said Panzer Chan, one of the organizers of Sunday’s march. “Please support us in our fight.”

Hong Kong has been rocked by a summer of unrest kicked off by a proposed law that would have allowed criminal suspects to be sent to mainland China for trial. Many saw the extradition bill as a glaring example of the Chinese territory’s eroding autonomy since the former British colony was returned to China in 1997.

Hong Kong’s government promised last week to withdraw the bill — an early demand of protesters — but that has failed to appease the demonstrators, who have widened their demands to include other issues, such as greater democracy.

The unrest has become the biggest challenge to Beijing’s rule since Hong Kong’s return from Britain. Beijing and the entirely state-controlled media have portrayed the protests as an effort by criminals to split the territory from China, backed by hostile foreigners.

Protesters on Sunday urged Washington to pass a bill, known as the Hong Kong Democratic and Human Rights Act, to support their cause. The bill proposes sanctions against Hong Kong and Chinese officials found to suppress democracy and human rights in the city, and could also affect Hong Kong’s preferential trade status with the U.S.

The U.S. State Department in a travel advisory Friday said Beijing has undertaken a propaganda campaign “falsely accusing the United States of fomenting unrest in Hong Kong.” It said U.S. citizens and embassy staff have been the target of the propaganda and urged them to exercise increased caution.

Some U.S. lawmakers have spoken out strongly in support of the Hong Kong protesters and voiced concern about the potential for a brutal crackdown by China.

Trump, however, has indicated the U.S. would stay out of a matter he considers between Hong Kong and China. He has said he believes the U.S. trade war with China is making Beijing tread carefully.

Protesters set fire to debris near a metro station that had been shuttered in the crowded Mongkok area but retreated after riot police chased them using pepper spray.