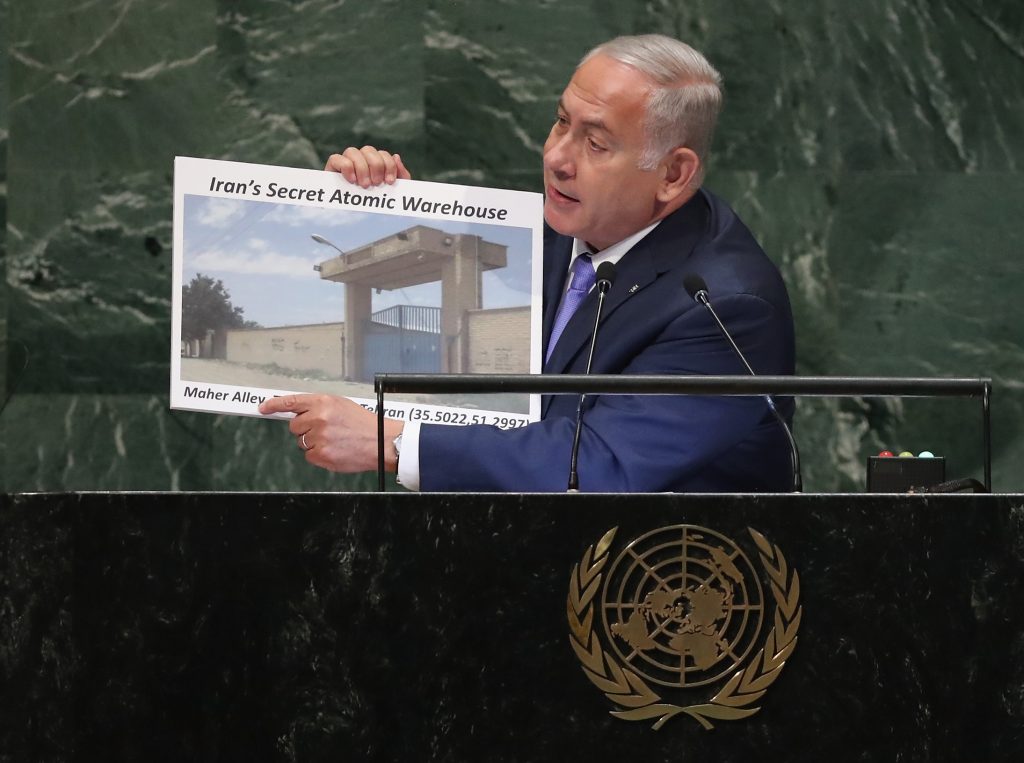 Samples taken by the U.N. nuclear watchdog at what Israel’s prime minister called a “secret atomic warehouse” in Tehran showed traces of uranium that Iran has yet to explain, two diplomats who follow the agency’s inspections work closely say.

The International Atomic Energy Agency (IAEA) is investigating the particles’ origin and has asked Iran to explain the traces. But Tehran has not done so, according to the diplomats, stoking tensions between Washington and Tehran. U.S. sanctions have slashed Iranian oil sales and Iran has responded by breaching its 2015 nuclear deal with world powers.

In a speech a year ago, Israeli Prime Minister Binyamin Netanyahu, who vehemently opposed the deal, called on the IAEA to visit the site immediately, saying it had housed 15 kg (33 lb) of unspecified radioactive material that had since been removed.

Reuters first reported in April that the IAEA, which is policing the nuclear deal, had inspected the site – a step it had said it takes “only when necessary” – and environmental samples taken there were sent off for analysis.

Israeli and U.S. media have since reported that the samples turned up traces of radioactive material or matter – the same vague language used by Netanyahu.

Those traces were, however, of uranium, the diplomats said – the same element Iran is enriching and one of only two fissile elements with which one can make the core of a nuclear bomb. One diplomat said the uranium was not highly enriched, meaning it was not purified to a level anywhere close to that needed for weapons.

“There are lots of possible explanations,” that diplomat said. But since Iran has not yet given any to the IAEA, it is hard to verify the particles’ origin, and it is also not clear whether the traces are remnants of material or activities that predate the landmark 2015 deal or more recent, diplomats say.

The IAEA did not respond to a request for comment. Iranian officials were not available to comment.

The deal imposed tight restrictions on Iran’s nuclear program in exchange for sanctions relief, and was based on drawing a line under Iran’s past activities. Both the IAEA and U.S. intelligence services believe Iran had a nuclear weapons program that it ended more than a decade before the deal.

Iran says its nuclear ambitions have always been peaceful.

Hawks such as Netanyahu, who has repeatedly accused Iran of seeking Israel’s destruction, point to Tehran’s past to argue that it can never be trusted. The Islamic Republic’s previous secrecy might explain why uranium traces were found at a location that was never declared to the IAEA.

The IAEA takes environmental samples because they can pick up telltale particles even long after material has been removed from a site. Uranium traces could indicate, for example, the former presence of equipment or material somehow connected to those particles.

The United States, pulled out of the nuclear deal last year by President Donald Trump, is trying to force Iran to negotiate a more sweeping agreement, covering Tehran’s ballistic missiles and regional behavior, than the current accord.

Iran says it will not negotiate until it is granted relief from U.S. sanctions, which France is trying to broker. In the meantime, Iran is breaching the deal’s restrictions on its nuclear activities step-by-step in response to what it calls U.S. “economic warfare.”

A quarterly IAEA report issued a week ago did not mention the sample results because inspection-related matters are highly confidential. But it did say Iran’s cooperation could be better.

“Ongoing interactions between the Agency and Iran…require full and timely cooperation by Iran. The Agency continues to pursue this objective with Iran,” the report said.

It is far from the first time Iran has dragged its feet in its interactions with the IAEA over the agency’s non-proliferation mandate. The IAEA has made similar calls in previous reports, in relation to promptly granting access for inspections.

The IAEA has likened its work to nuclear accounting, patiently combing through countries’ statements on their nuclear activities and materials, checking them and when necessary, seeking further explanations before reaching a conclusion, which can take a long time.

The process of seeking an explanation from Iran has lasted two months, the IAEA’s safeguards division chief told member states in a briefing on Thursday, diplomats present said. But he described what it was seeking an answer to far more generally, as questions about Iran’s declaration of nuclear material and activities, since the details are confidential.

“It is not something that is so unique to Iran. The agency has these cases in many other situations,” a senior diplomat said, when asked about the current standoff with Iran. “Depending on the engagement it can take two months, six months.”

That does not mean all member states will be happy to wait.

“IAEA Acting Director General going to Iran just as IAEA informs its Board that #Iran may be concealing nuclear material and/or activities,” U.S. National Security Adviser John Bolton said on Twitter on Saturday. “We join with other @iaeaorg Board member states eager to get a full report as soon as possible.”

The IAEA’s policy-making, 35-nation Board of Governors holds a week-long quarterly meeting starting on Monday.