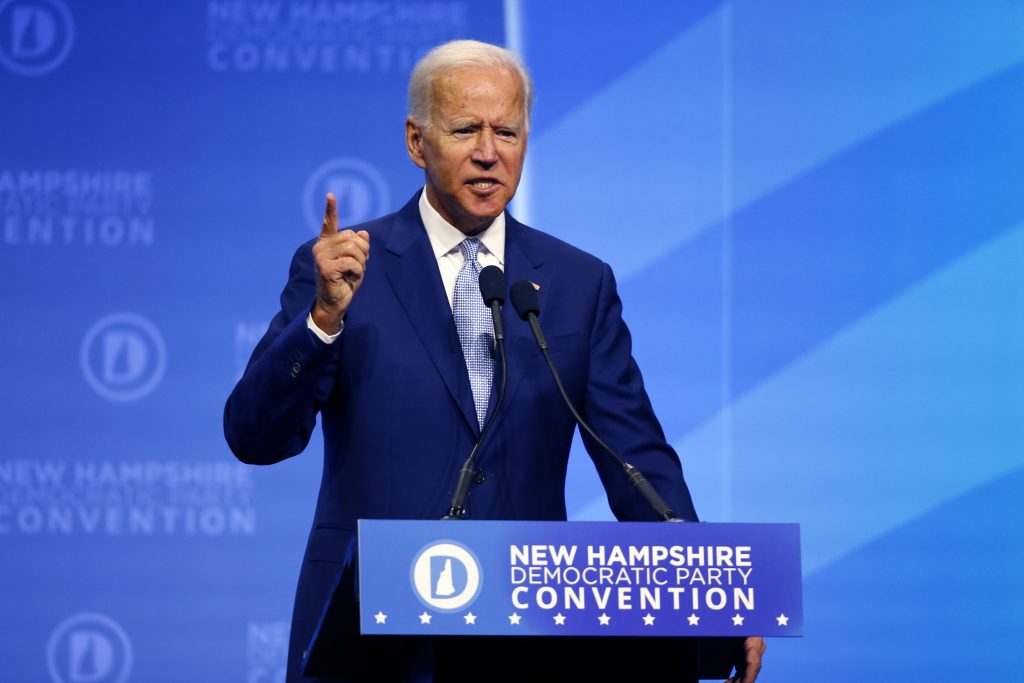 Former vice president Joe Biden holds a modest lead in the contest for the Democratic presidential nomination, bolstered by his personal appeal and current perceptions among Democratic voters that he has the best chance of defeating President Donald Trump in the 2020 general election, according to a Washington Post-ABC News poll.

Despite a field of more than 20 aspirants, the Democratic race shows Biden, Sen. Bernie Sanders, I-Vt., and Sen. Elizabeth Warren, D-Mass., forming the top tier of candidates. They are the only candidates whose support registers in double digits. All the others not only are in single digits but also are trailing the top three by at least 11 percentage points.

Support for Biden and Sanders among registered Democrats and Democratic-leaning independents has remained steady since the last Post-ABC survey, conducted in July. Warren, however, has gained ground and shares second place with Sanders. Sen. Kamala Harris, D-Calif., whose performance in the first debate in Miami in June was lauded by Democratic voters, has since fallen back.

The survey is a snapshot of the still-early Democratic race, with five months of campaigning before the first votes are cast in Iowa, followed by contests in New Hampshire, Nevada and South Carolina. Nearly 6 in 10 Democratic-leaning voters say they would consider switching to support another candidate for the party’s nomination or that they still don’t have a preference.

But the stratification of the field is likely to shape upcoming events and the behavior of the candidates, most immediately in the third debate, which will take place in Houston on Thursday night.

That debate will be the first time all the leading candidates share the same stage, and the first time in particular that Biden and Warren will be debating together. Just 10 candidates have qualified for the Houston debate, which will be limited to a single night and will air on ABC.

Only six other candidates register at 2 percent or more. Harris has 7 percent support, down from 13 percent after the first debate. South Bend, Indiana, Mayor Pete Buttigieg is supported by 4 percent, former congressman Beto O’Rourke, D-Texas, and entrepreneur Andrew Yang by 3 percent apiece, and Sen. Amy Klobuchar, D-Minn., and Rep. Tulsi Gabbard, D-Hawaii, by 2 percent of Democratic-leaning voters each.

Biden has put significant stock in his poll standing, using an early tv ad in Iowa to tout his advantage over President Trump in general-election matchups. During a conference call with reporters last week, Biden advisers said his advantage in Democratic primary polls represents far more than simply name identification and is based on voter knowledge of his years in the Senate and as President Barack Obama’s vice president.

Biden also has made ending Trump’s presidency after one term a principal part of his campaign message, and the new poll underscores the degree to which he is seen – and by a wide margin – as the Democrat best positioned to do that. Currently, 45 percent of Democratic voters name Biden as having the best chance to defeat Trump, the same percentage that said this in July. He is followed by Sanders at 14 percent and Warren at 12 percent.

On a related question, however, Biden’s advantage mostly disappears. Asked who would make the best president, regardless of which candidate has the best chance to defeat Trump, Biden still has an edge, but with 24 percent. On this measure, 20 percent pick Warren and 16 percent choose Sanders.

The Post-ABC poll does, however, show Biden’s support is rooted in more than perceived electability. Among his supporters, roughly 8 in 10 have a strongly favorable view of him, and 7 in 10 say he would be the best president if elected.

The survey finds that a bare majority (51 percent) of Democrats say it is more important to find a candidate who can defeat Trump than one with whom they mostly agree on issues, which is favored by 40 percent. That’s a reversal from April, when 47 percent said they preferred someone with whom they agreed on issues and 40 percent said their priority was to find a candidate most likely to beat Trump.

The demographics of that question show splits within the Democratic Party that have played out over the early months of the campaign. Two in three white Democrats with college degrees put the priority on a nominee who appears best positioned to defeat the president, as do almost 6 in 10 Democrats over age 50. White Democrats without college degrees, at 47 percent, and nonwhite Democrats regardless of educational achievement, at 45 percent, give this a somewhat lower priority, as do Democrats ages 18-49, at 46 percent.

He also is favored by 35 percent of moderate and conservative Democratic voters and by an identical percentage of Democrats age 50 and older and of those with incomes under $50,000.

Biden also enjoys a lead among women, with 31 percent saying they favor him for the nomination. That is similar to the combined support for Sanders and Warren (15 percent and 18 percent, respectively). Men divide more evenly, with 26 percent favoring Biden, 25 percent Sanders and 17 percent Warren.

Biden’s support appears more solid than Sanders’s or Warren’s, with 61 percent of his supporters saying they will definitely vote for him. Among those backing either Sanders or Warren, 38 percent say they are definitely going to vote for their preferred candidate, while 60 percent say they could change their minds and back someone else.

Warren has far stronger support among liberal Democratic voters (29 percent vs. 9 percent of moderates and conservatives), white voters (23 percent vs. 12 percent of nonwhites) and those with incomes of $50,000 or more (24 percent vs. 11 percent among those below $50,000). She also has a slight edge among white Democrats with college degrees, with 27 percent, compared with 19 percent for Biden and 15 percent for Sanders. Harris garners 12 percent among white college graduates.

Among liberal Democrats, Warren’s support rose from 18 percent in July to 29 percent in the current poll. Her support also rose sharply since the last poll among voters with incomes above $50,000.

Sanders fares best among voters ages 18-49, continuing the pattern from his 2016 campaign, when he was embraced by younger voters. But at 26 percent, that advantage is a tenuous one, as Biden has the support of 22 percent of those under age 50 and Warren 17 percent.

When it comes to their assessment of candidates’ ability to win a general election, large majorities of Democrats say neither race nor gender matters much. But among those who think those factors would matter, at least slightly more say male candidates, and white candidates would be more likely to defeat Trump.

Age is another factor in a race where the youngest candidate (Buttigieg, age 37) is roughly half the age of the oldest candidates (Sanders, who turned 78 on Sunday; Biden, 76; and Warren, 70). Among Democrats, 58 percent say it doesn’t matter if their nominee is older or younger than 70 – but 40 percent say a younger candidate would have a better chance against Trump.

Most Democrats do say ideology makes a difference in a candidate’s ability to defeat Trump, with 38 percent siding with the idea that a moderate candidate has a better chance of winning, compared with 13 percent saying a liberal is more electable.

Sanders and Warren are the leading liberal voices in the Democratic field, and favorability ratings suggest there is overlap in support among those backing the two of them. But many of their supporters have warm feelings toward Biden as well.

The Post-ABC poll was conducted by telephone Sept. 2-5 among a random national sample of U.S. adults reached on cellphones and landlines. The margin of sampling error is plus or minus 5.5 percentage points among the sample of 437 Democrats and Democratic-leaning independents, and is plus or minus six points among the sample of 391 Democratic-leaning registered voters.