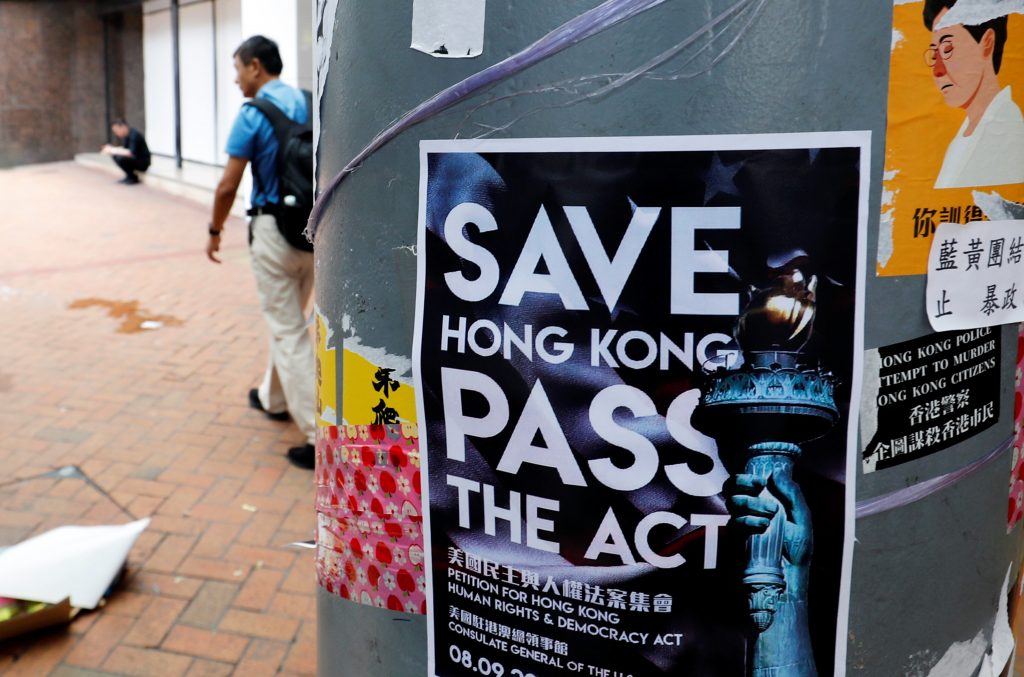 Hong Kong leader Carrie Lam on Friday said measures announced this week to help restore order in the Chinese-ruled city are a first step, and disagreed with a credit downgrade by rating agency Fitch after months of sometimes violent protests.

The Asian financial hub is bracing for more demonstrations this weekend, with protesters threatening to disrupt transport links to the airport, after Lam’s withdrawal of a controversial extradition bill failed to appease some activists.

“The four actions are aimed at putting one step forward in helping Hong Kong to get out of the dilemma,” Lam told reporters during a trip to China’s southern region of Guangxi. “We can’t stop the violence immediately.”

Lam on Wednesday withdrew a controversial extradition bill that would have allowed people to be sent to mainland China for trial in courts controlled by its ruling Communist Party and announced three other measures to help ease the crisis.

The Beijing-backed leader said she disagreed with the Fitch downgrade, adding that said some of the activists’ demands, such as dropping charges against protesters who used violence, violated the law.

Demonstrations have gripped Hong Kong for three months, at times paralyzing parts of the city amid running street battles between protesters and police whose violence has drawn international attention.

“I stressed that the rights and freedoms for (Hong Kong) citizens have to be granted,” Merkel said during a visit to China.

“In the current situation violence must be prevented. Only dialogue helps. There are signs that Hong Kong‘s chief executive will invite such a dialogue. I hope that materializes and that demonstrators have the chance to participate within the frame of citizens’ rights.”

Beijing supported the territory’s government “to end the violence and chaos in accordance with the law, to return to order, which is to safeguard Hong Kong‘s long-term prosperity and stability,” he added.

Protesters plan to block traffic to the city’s international airport on Saturday, a week after thousands of demonstrators disrupted transport links, sparking some of the worst violence since the unrest escalated three months ago.

Many protesters have pledged to fight on despite the withdrawal of the extradition bill, saying the concession is too little, too late.

Several activist and pro-democracy groups say they will not give up on their other key demands, with rallies planned on Friday evening at sites across the city such as subway stations and near government headquarters.

The extradition bill triggered mass protests that have since widened into a backlash against the Hong Kong government and its political masters in Beijing.

The massive, and sometimes violent, protests present Chinese President Xi Jinping with his greatest popular challenge since he came to power in 2012.

Authorities also say the turmoil has weighed on Hong Kong‘s economy, which faces its first recession in a decade. There is evidence some funds are being moved to rival financial centres, such as Singapore.

Many protesters in the densely populated city of 7.4 million remain angry over Lam’s refusal of an independent inquiry into perceived police brutality against them.

Police have fired tear gas, rubber bullets, bean bag rounds and water cannons at protesters, who have retaliated with petrol bombs and bricks.

The protesters’ three other demands are: retraction of the word “riot” to describe rallies, release of all demonstrators arrested and the right for Hong Kong people to vote for their own leaders.

Many residents fear Beijing is eroding the autonomy granted to Hong Kong when it was handed back to China in 1997.

China denies the charge of meddling and says Hong Kong is an internal affair. It has denounced the protests, warning of the damage to the economy and the possible use of force to quell the unrest.

Legislation regarding China’s actions in Hong Kong will be among the top priorities pushed by U.S. Senate Democrats when Congress returns to work after a recess next week, their leader said on Thursday.