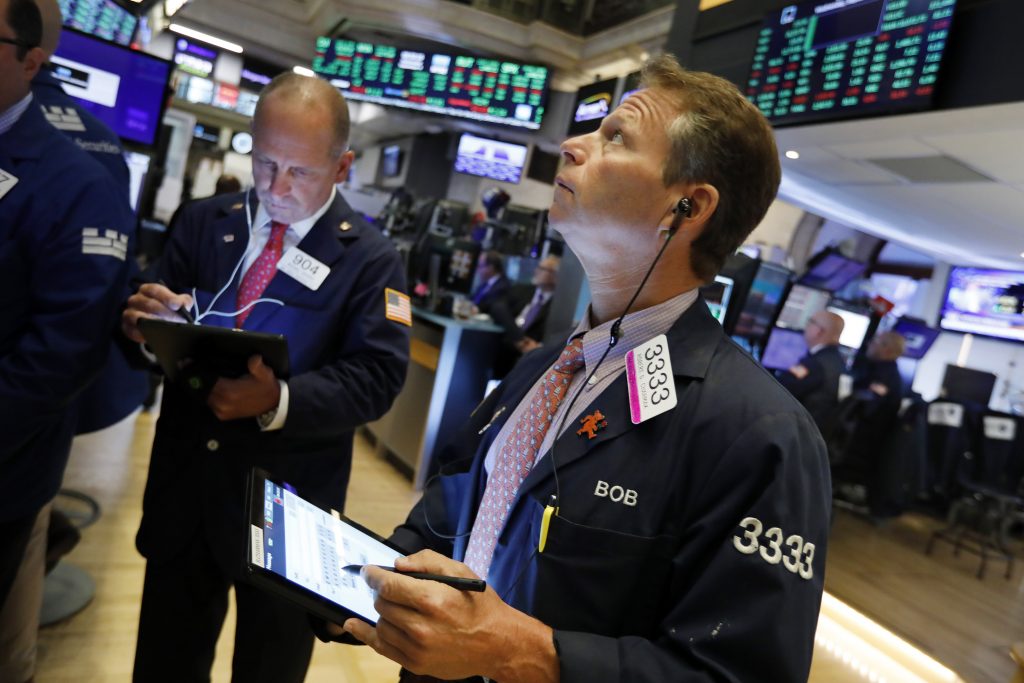 Stocks notched solid gains on Wall Street Thursday after news that the U.S. and China plan to hold talks next month gave investors fresh optimism that the world’s largest economies may yet find a way to resolve their costly trade war.

Markets have been rattled this summer as the longstanding trade conflict escalated and past rounds of negotiations failed to yield any progress. Investors fear that uncertainty over the conflict and the fallout from tariffs goods imposed by both sides will exacerbate a slowdown in global economic growth and hurt corporate profits.

Financial markets were also bolstered by positive economic data showing that companies are still hiring at a solid pace and that productivity rose at a healthy rate last quarter.

Technology stocks led the gains for a second day in a row as investors again fed a bigger appetite for riskier holdings. Chipmakers were among the standouts. Intel rose 2.7% and Nvidia climbed 5.6%. Apple rose 1.4%.

Investors again shunned safe-play holdings, including utilities and bonds, as they gained more confidence that the economy will continue growing.

TRADE WAR TWISTS: U.S. and Chinese envoys have agreed to meet in early October in yet another attempt to end a trade war that has rattled global financial markets and threatened economic growth. Negotiations between the world’s largest economies have been tenuous and the trade war has been escalating with expanded tariffs on each other’s products.

The latest escalation kicked in Sunday, with the U.S. imposing 15% tariffs on $112 billion of Chinese imports. Washington is planning to hit another $160 billion on Dec. 15, a move that would extend penalties to almost everything the United States buys from China. Beijing responded by imposing duties of 10% and 5% on a range of American imports.

THE ECONOMY: Payroll processor ADP reported that U.S. businesses added 195,000 jobs in August, well above economists’ expectations. The private report frequently diverges from the government’s own employment report, which is scheduled to be released Friday. Economists expect that report will show 160,000 jobs were added.

The positive report gave already rising bond yields an additional push. The yield on the 10-year Treasury note rose to 1.57% from 1.46% late Wednesday, a big move.

OVERSEAS: Stocks in Europe moved broadly higher as political developments in Britain point to a less chaotic exit from the European Union. Britain’s Parliament has been pushing back against Prime Minister Boris Johnson and hope to make a deal with the EU before leaving on Oct. 31. Leaving the 28-member trading bloc without a deal could hurt Britain’s economy. The British pound surged on the renewed hopes for a more orderly European Union exit.

NICE THREADS: G-III Apparel jumped 25.2% after the company beat Wall Street’s fiscal second quarter earnings expectations and raised its revenue forecast for the year. The company, which owns DKNY and Wilson’s Leather brands, cited gains from its wholesale business during the quarter.