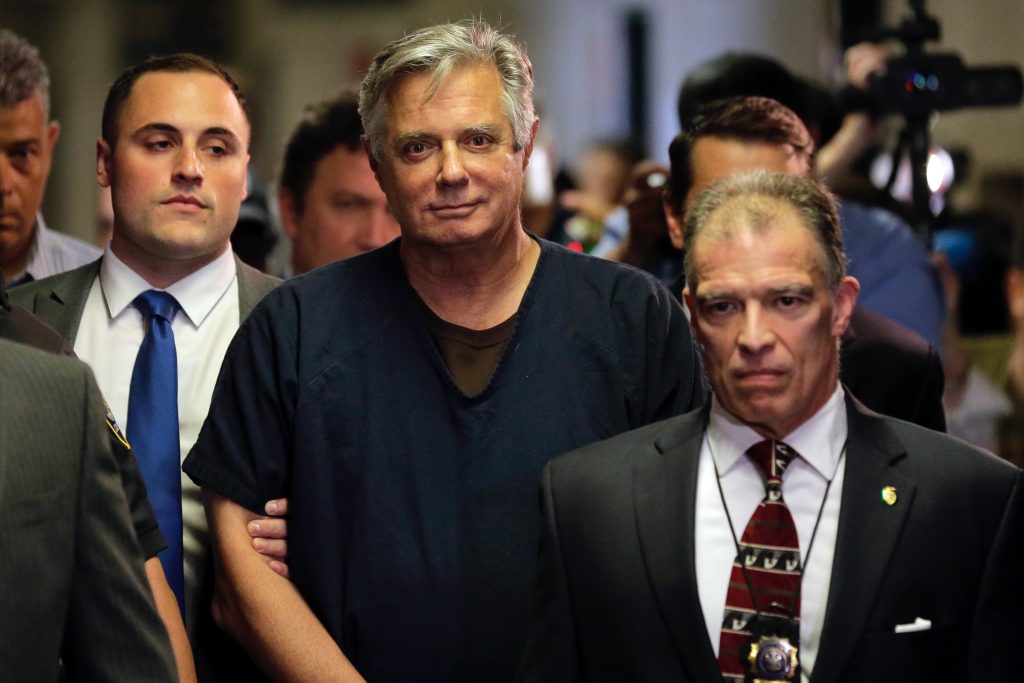 The state case involves some of the same allegations as federal cases that have landed Manafort behind bars, violating a state law that bars repeat prosecutions for the same general conduct, lawyer Todd Blanche wrote in the filing late Wednesday.

The factual overlap between the federal and state cases “is extensive — if not total,” Blanche wrote.

Manhattan District Attorney Cy Vance Jr. announced the state charges in March, minutes after Manafort was sentenced in the second of his two federal cases, which stemmed from the special counsel probe of Russian election meddling.

The state-level indictment was widely seen as a way to keep Manafort, who is serving a 7½-year prison sentence, locked up even if President Donald Trump were to pardon him for his federal crimes. The president can pardon federal crimes, but not state offenses.

“Mr. Manafort is entitled to the equal protection of New York’s double jeopardy statute, which permits no exceptions for defendants who have garnered national interest, nor for favored political causes of the elected district attorney,” Blanche wrote.

The Manhattan district attorney’s office declined to comment, saying it would respond in a court filing by an Oct. 9 deadline.

The New York Post first reported on the defense’s push to get the case dismissed.

Manafort was convicted in federal court of misleading the U.S. government about his foreign lobbying work, hiding millions of dollars from tax authorities and encouraging witnesses to lie for him.

The New York indictment alleges Manafort gave false and misleading information in applying for residential mortgage loans, starting in 2015 and continuing until three days before Trump’s inauguration in 2017.

Paperwork filed by New York prosecutors cited admissions Manafort made last year during his federal trial in Washington regarding misrepresentations in mortgage applications for properties in Manhattan and Brooklyn and on Long Island.

Manhattan prosecutors contend their case is safe from a double jeopardy challenge because mortgage fraud and falsifying business records are state crimes, not federal crimes.

Manafort’s federal cases were byproducts of special counsel Robert Mueller’s probe of Russian influence on the 2016 election, but a judge who presided over one of them made clear they had nothing to do with Russian election interference, but rather with Manafort’s years of “gaming the system.”

In May, New York lawmakers passed a bill to ease the state’s double jeopardy protections and ensure state prosecutors could pursue charges against anyone granted a presidential pardon for similar federal crimes.