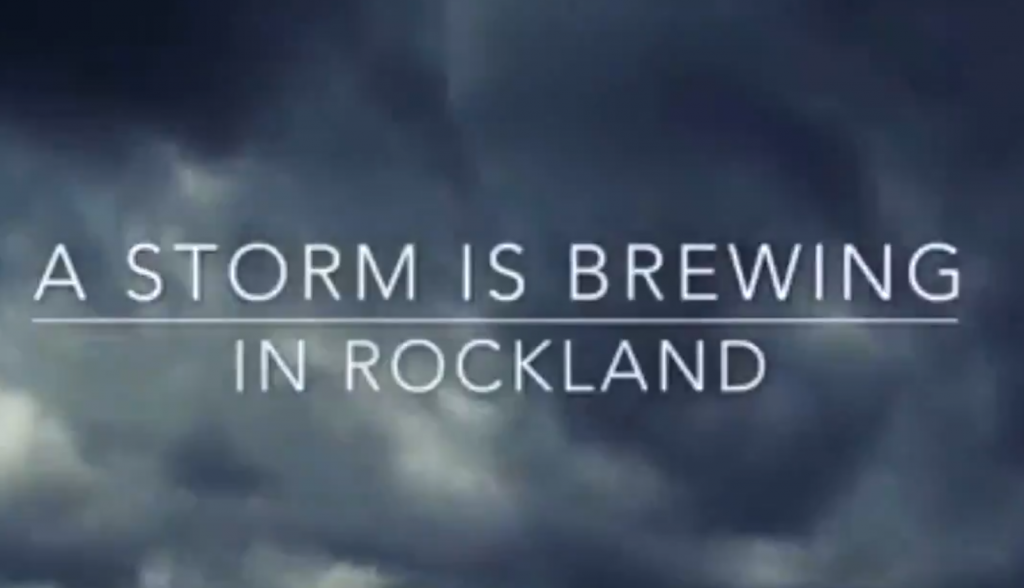 A meeting of the Rockland County Legislature Tuesday night was combative as expected, as controversy rages over battles such as zoning and real-estate development, which many in the local the Orthodox Jewish community says is in fact thinly veiled anti-Semitism.

An overflow crowd began lining up long before the 7:00 scheduled meeting, the first in the wake of recent tensions that included a video posted on the social-media page of the Rockland County Republican Party, entitled “A Storm Is Brewing in Rockland” and warning about “overdevelopment” and that “Aron Wieder and his Ramapo bloc are plotting a takeover,” which was widely condemned as anti-Semitic, including by prominent New York elected officials, and eventually removed; Legislator Aron Wieder publicly calling a community activist who runs a social-media page critical of the Orthodox community “the anti-Semite of Rockland County”; and flyers accusing Legislator Laurie Santulli – who has been critical of the Chassidic community – of using “Nazi tropes,” anonymously left on homeowners’ lawns in bags containing three rusty nails.

Most attendees at the meeting, where residents are allowed to comment publicly, were not Orthodox. Many speakers warned about what they deemed overdevelopment, and denied that they were motivated by anti-Semitism.

“I’m not against any religious group,” declared a speaker named Loretta, who lives in New City and identified herself as a fifth-generation Rocklander. She said she was opposed to “overdevelopment by greedy builders and politicians.”

Another speaker said residents are “concerned [about] the undue political influence of the Hasidic bloc vote.”

Legislator Christopher Carey said, “The real root cause of the anger and frustration” is not anti-Semitism but “the overdevelopment of Ramapo achieved by any means necessary and the irreversible impact it’ll have on all of Rockland County.”

Legislator Itamar Yeger donned his Shabbos frock and hat, and described having heard anti-Semitic slurs as he walked the streets on Shabbos.

Community activist Rivky Feiner told Hamodia on Wednesday that “there were many real haters in the room, and it took guts for Yeger to speak the way did, powerfully showing that when he transitioned from his work clothes into Chassidic-looking Shabbos clothes, he became ‘one of them’ – one who gets cursed at or screamed at.”

But Feiner said she was also “disappointed at the extremely low turnout at the meeting by the Orthodox community. This was the time for everyone to show up,. There were long lines around the building of people who could not get in, but disproportionately few Orthodox.”

She says she believes the video and complaints about overdevelopment are simply “fearmongering political tactics” in advance of the November county elections.

At Tuesday night’s meeting, Santulli also criticized Wieder for having publicly yelled at activist Michael Hull, “I’ll tell it to your face: you’re the anti-Semite of Rockland County,” as Hull was leaving a YAFFED press conference. Hull runs the social-media group “Clarkstown – What They Don’t Want You to Know,” which is critical of the Jewish community.

“To … hijack a public conference about substantially equivalent education for children in this county,” said Santulli, “for you to turn around and make it about anti-Semitism … it’s just disgusting tactics, it’s abusive and its bullying and it’s got to stop.”

Speaker Yehuda Zorger slammed Santulli for having previously referred to Chassidim as “a group of people hiding behind a perverted version of Judaism, who are reproducing at unsustainable numbers.”

“You called my way of life a perverted way of Judaism.” said Zorger. “Really now? Following the Old Testament is a perverted way of Judaism? Is somebody who is a secular Jew, who doesn’t keep the Sabbath, doesn’t eat kosher, a more special Jew than a ‘perverted Jew’ that keeps the Old Testament that G-d gave us at Mount Sinai? Really now? You want to talk about racism and anti-Semitism? I have to carry my pay stub in my pocket because when I go to meetings in this county people yell out, ‘Orthodox – you guys don’t pay taxes!’” Zorger said he pays $18,900 in taxes, but “I don’t even get busing for my children.”

In his own comments Tuesday, Wieder, one of those most in the center of the ongoing battles, chose to focus on the positive of his county.

“The overwhelmingly vast majority of Rocklanders are exceptional, tolerant and wonderful, wonderful people,” said Wieder. “While some would like you to believe that a storm is coming, I am here today to tell you that the sun is shining as bright as ever and will continue to shine on our beautiful and diverse county.”