Israel Netanyahu in Chevron: We Will Be Here Forever
Israel 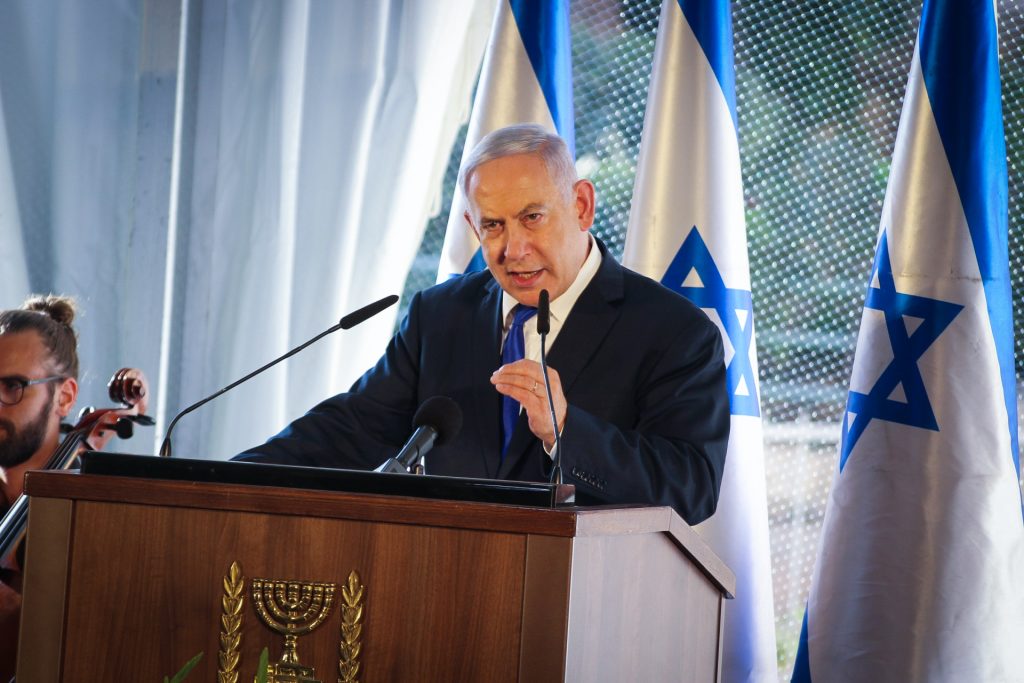 In a rare visit to Chevron on Wednesday, Prime Minister Binyamin Netanyahu declared that Israel will remain in the city forever.

“We have come here to unite in memory, to express victory over the bloodthirsty rioters who committed the horrific massacre 90 years ago today,” Netanyahu said. “They were sure that they kicked us for good, but they made a serious mistake,” referring to the Arab rioters who fell upon the Jewish community there, chiefly the yeshiva of Chevron.

“We have accomplished historical justice, and returned to the city of the Avos,” he says. “Chevron will never be empty of Jews. We are not strangers in Chevron, we will remain here forever,” he says. “We have not come to dispossess anyone, but nobody will dispossess us either.”

Culture Minister Miri Regev and Knesset Speaker Yuli Edelstein, both of Likud, called for annexation of the city.

“There is no better place to start bringing that pledge into fruition than Chevron,” Regev said.

“If there’s no Chevron there’s no Tel Aviv,” Regev added. “Tel Aviv’s right to exist is rooted in Chevron, where Avraham and Sarah are buried.”

In his remarks, Netanyahu also praised those Palestinian residents of the city who “risked their lives” to save Jews during the massacre.

The prime minister also noted that his government has build dozens of homes in the Jewish Quarter, and that “residents moved into Machpelah House last week. We are also dealing with other important issues…regarding accessibility in the Tomb of the Patriarchs and the realization of the historic Jewish property rights,” he said.

Knesset Speaker Yuli Edelstein affixed a mezuzah to the doorpost of the Machpelah House during the visit.

“On September 4, 35 years ago, I was arrested in Moscow and sent to Gulag. Who would have believed then that I, as the Speaker of the Knesset, would be allowed to fix a mezuzah in the Machpelah House opposite the Cave of the Patriarchs?” Edelstein said.

Rabbi Uzi Sharbaf, who invited Edelstein to Chevron, said: “The fact that the Knesset Speaker affixed a mezuzah here today strengthens us by showing understanding that buying homes from Arabs throughout Chevron is the same as throughout the rest of Judea and Samaria,” Arutz Sheva reported.

The occasion for the visit was commemoration of the 90th anniversary of the 1929 riots, in which 69 Jews were murdered in Chevron, Hy”d, essentially bringing to an end the existence of a Jewish community that had been in place for thousands of years.

The Chevron riot was part of a general day of action against Jews. Communities in many places, including Yerushalayim, Motza, Tel Aviv, Be’er Tuvia, Hulda, Haifa, Tzfas, Shechem, and other locations were targeted as well during a week of rioting in the last week of August in 1929, 133 Jews were murdered, and nearly 250 were injured.

The Arab Waqf that claims responsibility over Me’aras Hamachpeilah threatened Wednesday that if Netanyahu comes to the site, it would lead to “an unprecedented increase in tension and cause great harm to the feelings of Muslims which will drag the region into a religious war. The visit reminds us of the visit of Ariel Sharon to Har HaBayis in 2000, which triggered the second intifada.” The Waqf called on Arabs to “defend the mosque” and do everything possible to prevent Israelis from taking over the site and banning Muslims.