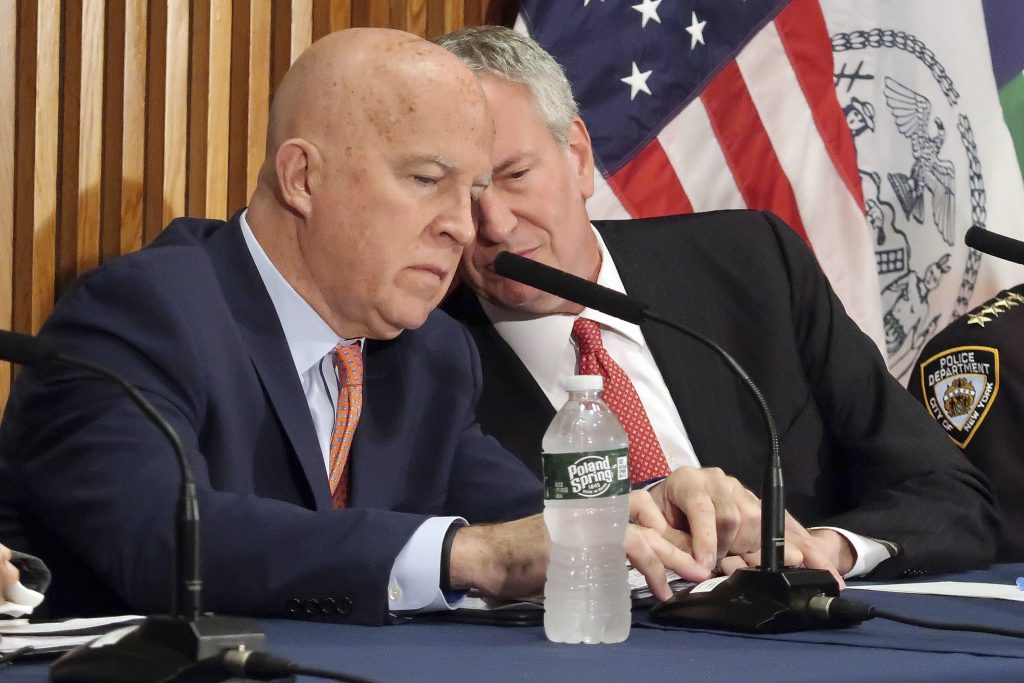 Arrests totals in New York City have plunged in the two weeks since the police department fired an officer for the 2014 chokehold death of Eric Garner, pointing to a possible slowdown amid a heated response to the firing from the officers’ union.

O’Neill stopped short of saying the declines were the result of an intentional slowdown. He said he and other department leaders are studying data such as sick time usage, response times, radio backlogs and enforcement activity to pinpoint where and why fewer arrests are occurring.

“We have expectations that our officers perform,” O’Neill said.

The head of the officers’ union hinted at a possible slowdown following Pantaleo’s firing for using what a department administrative judge deemed a banned chokehold. Garner’s dying words after the confrontation with the white officer, “I can’t breathe,” became a rallying cry for the Black Lives Matter movement.

Pat Lynch, the president of the Police Benevolent Association, said in the wake of the firing that officers would continue to uphold their oath to serve and protect the public, but not “by needlessly jeopardizing our careers or personal safety.”

Lynch said it was time for each officer “to make their own choice” and that the union urged them to “proceed with the utmost caution in this new reality, in which they may be deemed ‘reckless’ just for doing their job.”

A few weeks earlier, when an administrative judge recommended that Pantaleo be fired, Lynch urged officers to “take it a step slower” when responding to 911 calls and to wait for a supervisor instead of using physical force on an uncooperative suspect.

De Blasio, who earlier said the city wouldn’t accept a slowdown, said Wednesday: “Our officers are keeping people safe and they’re acting like professionals. And if there are some sporadic issues, they’ll be dealt with.”

The city has been seeing a systematic drop in summons and arrest totals since 2014 amid an overall reduction in crime, but enforcement activity after Pantaleo’s firing has declined at a rate greater than the annual decline police see in each category of enforcement, the NYPD said.

Part of the drop in misdemeanor arrests of late may be the result of a marijuana decriminalization law that went into effect in the state on Aug. 28, O’Neill said.

The friction surrounding Pantaleo’s firing comes amid a rash of incidents involving members of the public attacking police officers. On Friday in Queens and Monday in Brooklyn, officers shot and killed men who had fired guns at their vehicles.

On Tuesday in the Bronx, people displaced from a burning apartment building starting fighting with officers in the street, including a woman who was arrested for allegedly tearing off an officer’s body camera. That was after videos posted on social media in July showed people in various parts of the city pouring buckets of water on patrol officers.

“This is not a new thing,” O’Neill said. “This happens, and when it happens there have to be consequences for it. As police officers, we have to take action.”