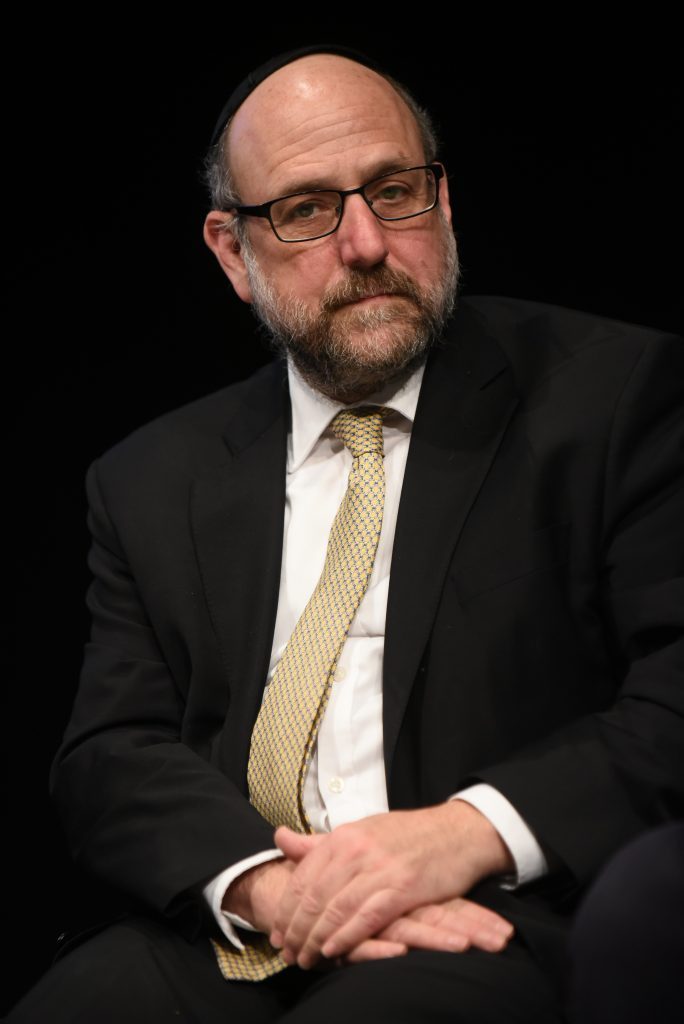 This past Sunday, world leaders met at a grand ceremony in Warsaw to mark 80 years since Nazi Germany’s invasion of Poland sparked what would become the Second World War.

International coverage of the event focused largely on German President Frank-Walter Steinmeier’s public appeal to Poland to forgive what he labeled a “German Crime.”

Polish President Andrzej Duda opened the event with a powerful and passionate speech that praised Polish resistance, decried both Nazi and Soviet terror, and warned the world not to follow the prewar strategy of appeasement in dealing with present-day aggressors, namely Russia.

Yet to many critics of Poland’s ruling Law and Justice (PiS) party, his patriotic remarks against the backdrop of President Steinmerier’s mea culpa amplified accusations that the government has obscured wartime history by placing an almost exclusive focus on Polish heroism, while largely ignoring widespread collaboration with Nazi occupiers.

The nation’s Chief Rabbi, Michael Schudrich, attended both the mass event in Warsaw and a smaller one in Wielun, a city that was the first to be bombed by the Luftwaffe on September 1, 1939. While often critical of what many see as PiS’ one-sided historic vision, he did not feel that President Duda was to blame for omitting Polish collaboration from Sunday’s ceremonies.

“This was an event about Polish-German reconciliation,” he told Hamodia. “This was not an event about the Warsaw Ghetto uprising or the liberation of Auschwitz. This was about the invasion that started World War II and killed tens of millions of people. The President explicitly mentioned several times the tremendous suffering of the Jews during Poland’s occupation. This ceremony recognized that, but its purpose goes beyond it as well, and whatever legitimate complaints there might be about the distortion of history, I do not think Sunday was an example of it.”

While no shortage of examples exist of individual Poles collaborating with Nazis and taking an active role in the murder of Jews, unlike many other European nations, Poland never had a collaborationist puppet government. The only government that Poland did maintain throughout the war operated in exile in London as part of the Allies’ coalition, and directed Polish troops, who fought in several major engagements against the Nazis.

Rabbi Schudrich felt that a conflation of German and Polish responsibility was also a distortion of history.

“To tell another story is based on misunderstanding,” he said. “The Germans attacked and occupied Poland. After that, there were many Poles who collaborated, as there were in most countries in Europe, but that doesn’t change the facts of who was chiefly responsible.”

Accusations that PiS seeks to tells a biased narrative of the Holocaust in Poland date back many years and erupted into an international scandal, with the party’s sponsorship of a controversial law that threatened fines and jail time for statements that placed blame for genocide on Poles or Poland. The law was amended as part of an equally divisive deal struck with the Israeli government. Yet the issue has not subsided. The government’s minister of culture has yet to allow Professor Dariuz Stola, a celebrated scholar who headed the Polin Museum and has been a critic of the government, to begin a new term as director of the institution. Only weeks ago, Rabbi Schudrich criticized the government’s decision to honor a World War II-era partisan unit that has been accused of Nazi collaboration.

President Duda has spoken of Polish collaborators on several public occasions, but the more hard-line elements of his party, such as Prime Minister Mateusz Morawiecki, generally ignore the phenomenon, shifting focus to Polish resistance and making no shortage of controversial comments along the way.

Rabbi Schudrich expressed hope that President Steinmeier’s apology would pave the way for greater admission of guilt on the Polish side as well, but said that such a move could only come if critics also admit the complicated historical record.

“What Germany did here this week should inspire [the Poles], but this has to be a gradual and two-sided process,” he said. “Germany were the aggressors – there is nothing complex about that – and their obligation to apologize is clear. There are a lot of people in these conversations that want to talk about Polish collaboration but don’t want to recognize the extent of Polish suffering or the role of many righteous gentiles who risked their lives to save Jews. Right now, what we have is a vicious cycle where one side paints a black picture and the other a white one, but the only way to move forward is for both to find a way to balance their language.”

A major focus of President Duda’s remarks was the dual invasion of Poland by the Nazis on September 1, and a second one by the Soviet Union on the 17th of that month, mentioning the Communist troops’ murder of an estimated 22,000 Polish military officers and intellectuals in the Katyn massacre. Some have criticized Poland and other eastern European countries of conflating Soviet and Nazi crimes; however Rabbi Schudrich feels that the most recent remarks had not crossed that line.

“It is part of [the Poles’] new narrative. It’s true that Poland was attacked from two sides and what the Soviets did was largely forgotten, because you weren’t allowed to talk about it until 1989. In the context of who attacked Poland, it’s true that they both did, but if we are going to equate the two in terms of genocide, that will be a problem,” he said.

President Duda’s statements about Soviet aggression were followed shortly thereafter by a stern warning to the leaders gathered–who included U.S. Vice-President Mike Pence, but noticeably excluded any Russian representative– about Russian aggression in the region, particularly in Georgia and Ukraine.

Attempting to put modern-day politics aside, Rabbi Schudrich said that the day’s events served a worthy purpose of educating about the horrors of the Second World War, as generations grow increasingly distant from it.

“It’s clearly important that people remember,” he said. “September 1 is a date that began the worst war in history, and if that’s forgotten, we’re in trouble.”

Hamodia will continue to comment on this issue in future editions.