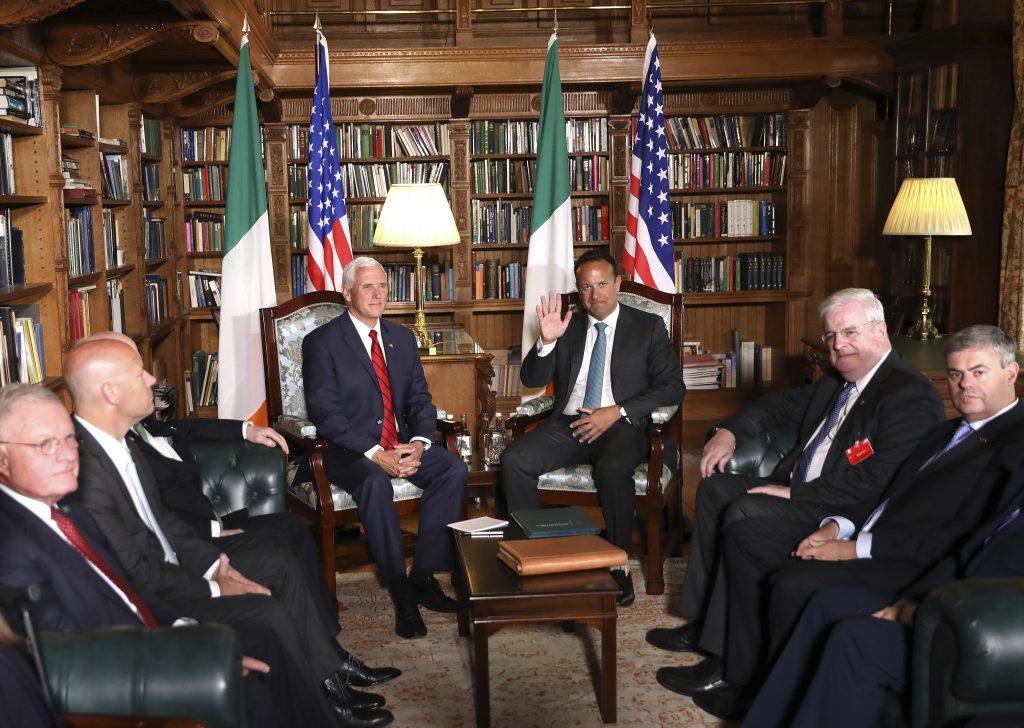 U.S. Vice President Mike Pence on Tuesday defended his decision to stay at one of President Donald Trump’s properties while in Ireland in the face of criticism by Democrats and good government groups that he’s enriching President Trump at taxpayers’ expense. He called the Trump property a “logical” choice.

Speaking to reporters in Dublin, where he spent the day, Vice President Pence spoke about his personal connection to the village of Doonbeg — the site of both the Trump International Golf Links & Hotel as well as family history.

“It’s deeply humbling for me to be able to come back to Ireland and have the opportunity to go to the very hometown of my mother’s grandmother,” said Pence. He planned to have dinner Tuesday at a pub in the village where he worked several weeks during his first visit to the island when he was 22.

Pence added that he understood “political attacks by Democrats,” but said the State Department had signed off on the decision. He said Doonbeg is a “fairly small place” and the opportunity to stay at the property, “to accommodate the unique footprint that comes with our security detail and other personnel, made it logical.”

Trump, who owns hotels and golf clubs across the U.S. and in Europe, has come under intense criticism for frequenting properties he owns and profits from — giving them taxpayer-funded publicity and running up millions of dollars in taxpayer costs. Foreign governments and groups looking to curry favor with the president have also spent large sums at his properties, raising ethical alarms about potential pay-to-play dynamics and other conflicts.

Marc Short, Pence’s chief of staff, told reporters aboard Air Force Two earlier that the decision to stay at the Trump property was made at the president’s “suggestion” and that Pence and his entourage were not staying for free.

Short said Pence’s office followed official protocol and received State Department sign-off. He said the club is the “one facility” in the Doonbeg area able to accommodate a group of their size.

Pence, who is traveling with his wife, mother and sister, had originally planned to visit the village at the end of a trip to Europe, spending a single night in the village after visits to Iceland, London and Dublin. But then Trump canceled his planned visit to Poland because of Hurricane Dorian, and asked Pence to take his place. That forced last-minute reshuffling of travel plans.

Instead of making two separate trips to Europe or canceling Pence’s trip, his staff switched around the stops, so that he traveled from Poland to Ireland to Iceland to London. Under the new schedule, Pence is staying two nights in Doonbeg, but flying the hour-or-so into Dublin on Tuesday for official meetings, including coffee with Irish President Michael Higgins and lunch with Irish Prime Minister Leo Varadkar .

Short said advance teams and Secret Service had already done weeks of planning work to secure the site, one reason they decided to keep the Doonbeg plan in place.

The decision drew criticism back home.

“Your tax dollars: making the Trump family richer,” the Democratic National Committee added by tweet, noting Trump’s own visits to his Virginia golf club over the long weekend.

The Air Force puts the flight-cost of a C-32, the modified Boeing 757 jet known as Air Force Two when Pence is on board, at about $13,000 per hour. The vice president is personally covering all costs for his mother and sister, Short said.

Pence said he was pleased to have the opportunity to return to the village.

“To have an opportunity to connect to the roots of my family I think supports the relationship between the United States and Ireland,” he said.