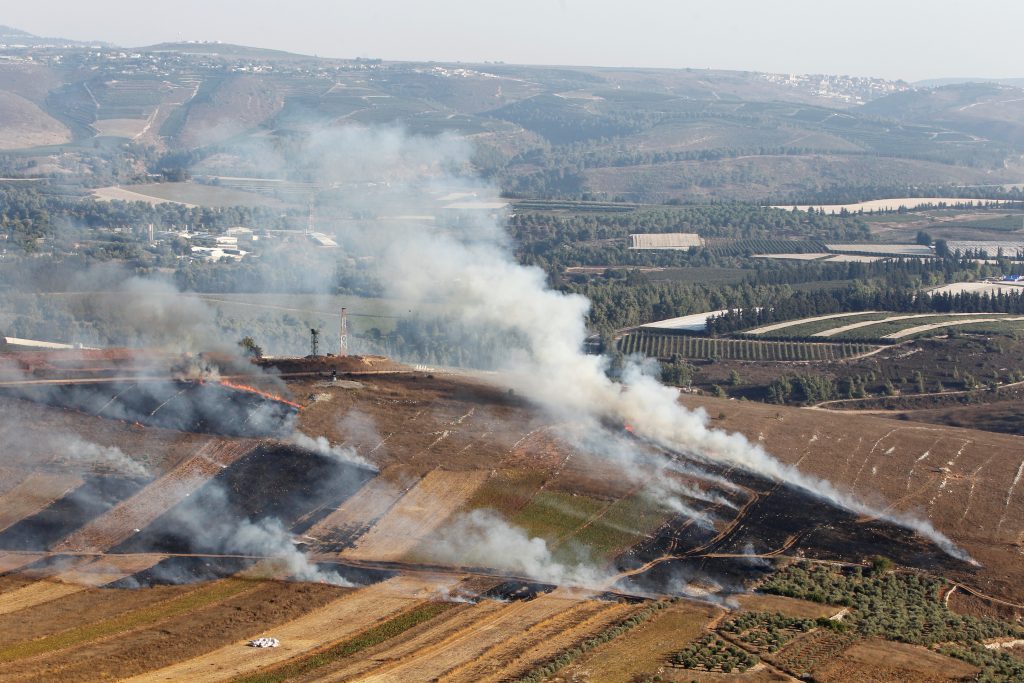 IDF warplanes struck multiple targets in southern Lebanon on Sunday afternoon, after Hezbollah terrorists fired a number of missiles at Israeli targets near the border.

Lebanon’s Iran-backed Hezbollah terror group said that its fighters destroyed an IDF vehicle near the border on Sunday.

The IDF confirmed that several anti-tank missiles were fired from Lebanon, landing in or around the town of Avivim, near the Israel-Lebanese border, scoring hits, and Israeli forces were responding.

Hezbollah’s Al-Manar channel said that IDF forces were shelling the border village of Maroun Al-Ras in south Lebanon. The channel’s live broadcast from the village showed large plumes of smoke rising from the countryside near the border.

According to the preliminary IDF report, the projectiles were anti-tank missiles, which were fired at army vehicles near the border, as well as an IDF base.

An IDF spokesperson said that there “were several hits” scored by the missile attack from southern Lebanon, but did not specify if there were any casualties.

Communities up to 2.5 miles from the Lebanese border were given the directive, amid fears of a Hezbollah attack.

The Prime Minister’s Office said that Prime Minister Binyamin Netanyahu, who also serves as defense minister, was meeting with the Honduran president in Yerushalayim as the events were unfolding.

Netanyahu was briefed on the developing situation.

Earlier, the Lebanese military said an Israeli drone, which violated Lebanon’s airspace, dropped incendiary material and sparked a fire in a pine forest by the border on Sunday.

The fires near the border in Lebanon “originate with operations by our forces in the area,” the IDF said in a statement without elaborating.

The Lebanese army statement said it was following up with U.N. peacekeepers but gave no further details.

Residents and security sources at the border in south Lebanon say Israel has in recent days fired flare bombs into the Israeli-held Shebaa farms along the border.

The IDF said over the weekend that it had ordered extra forces to deploy near the border, amid rising tensions with Lebanon’s Hezbollah movement.

The leader of Iran-backed Hezbollah, Sayyed Hassan Nasrallah, said his field commanders were prepared to retaliate to a drone attack in Beirut’s suburbs a week ago, which he has blamed on Israel. The two old enemies last fought a deadly month-long war with each other in July 2006.

Lebanese soldiers, who do not have air defense systems, opened fire at Israeli drones in southern Lebanon earlier last week.

Israeli aircraft regularly enter Lebanese airspace, but it is rare for Lebanon’s army to target them. Beirut has sent several complaints to the United Nations before about Israeli drones and jets breaching its airspace.